In his first appearance since he stunned the world-ranked Fabricio Werdum four months ago, dos Santos spoiled the Octagon debut of Stefan Struve with a first-round technical knockout at UFC 95 “Sanchez vs. Stevenson” on Saturday at the O2 Arena in London. The end came 53 seconds into the opening frame in what amounted to little more than a light workout for the Brazilian.

The 25-year-old dos Santos (8-1) wobbled the 6-foot-11 Dutchman with a left hand and then put him down with a right. Referee Dan Miragliotta was quick to intervene, and though Struve (16-3) protested, he was clearly rocked by the blows. The 21-year-old Cage Gladiators heavyweight champion had won five in a row, all by submission, but his momentum grinded to a halt when dos Santos’ fists found their mark.

In other preliminary action, England’s own Terry Etim posted his second win in as many fights, as he stopped Palace Fighting Championship lightweight titleholder Brian Cobb on second-round strikes. The defeat snapped Cobb’s nine-fight winning streak.

Etim (12-2), a one-time Cage Gladiators champion, had the arena in his corner and appeared to capture a competitive first round, as he attacked the former collegiate wrestler with low kicks. Cobb (15-5) scored with takedowns but failed to capitalize, as Etim avoided damage on the ground.

The 23-year-old Englishman roared out of the gate in round two and dropped Cobb with a head kick. Ten seconds into the period, the fight was over, much to the delight of the pro-Etim crowd. 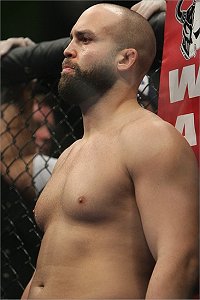 Rocked by an early right hand, Dunham recovered, re-established himself standing and landed a devastating left hook that dazed and floored his experienced opponent. Based out of Xtreme Couture Mixed Martial Arts in Las Vegas, the unbeaten Dunham (8-0) buried Eklund with ground strikes, forcing the stoppage 2:13 into the opening frame.

Dunham has finished his past six opponents. None of the wins were more significant than his TKO against Eklund (14-4-1), an accomplished European fighter who cut his teeth inside the Shooto, M-1 and Bodog-Fight circuits.

In a heavyweight duel between two UFC newcomers, International Fight League veteran Mike Ciesnolevicz made a memorable first impression, as he submitted the 6-foot-6, 263-pound Neil Grove with a first-round heel hook.

The 29-year-old Ciesnolevicz (17-3, 1 NC), the latest Miletich Fighting Systems student to reach the UFC, shot for an early takedown, and while his efforts were initially turned away, he managed to get the much bigger man on the ground. Once there, he had Grove’s number.

After Grove (7-2) took top position, Ciesnolevicz went to work on his legs and coaxed the tapout from the Ultimate Challenge UK heavyweight champion 1:03 into round one. He has rattled off four consecutive victories.

Based out of the same Wolfslair Academy that produced middleweight contender Michael Bisping, Kelly (8-1) battered the overmatched Mandaloniz from top position. He opened cuts above both of the Hawaiian’s eyes with punches and elbows, and by the time the fight was over, Mandaloniz (3-2) was a mess. Judges awarded Kelly a unanimous decision by scores of 30-27, 30-27 and 30-28.

The 24-year-old Kelly rebounded nicely from his first professional defeat and reaffirmed his standing as a prospect worth watching in the UFC’s meat grinder of a welterweight division.

With reporting by Paul Concannon in London.