Few fight fans are as passionate and loyal as the Mexican and Mexican-American fans who keep boxing going. Yet, to this point, the UFC has become pay-per-view’s top attraction without gaining significant inroads into that market. That leads to a tantalizing question following Cain Velasquez’s heavyweight title victory at UFC 121 on Saturday at the Honda Center in Anaheim, Calif. How much bigger can the sport of MMA get if it is able to bring America’s emerging Mexican-American market fully into the fold?

At UFC 121, the UFC’s biggest drawing card suffered a devastating setback. Brock Lesnar again looked uncomfortable with taking a punch and was mauled for a first-round loss. But with every decisive defeat for a current star comes the opportunity to create a new one. Velasquez, the soft spoken son of a Mexican migrant worker, announced his presence as one of the sport’s best fighters.

Promotional opportunities often come with a lot of luck. The NBA targeted the Chinese market for many years but would not have had anywhere near the success it did without the presence of Yao Ming. If Wang Zhizhi were the top Chinese player in the NBA, basketball simply would not have grown as big as it has in China. Likewise, Georges St. Pierre’s class and dominance has helped to make Canada the strongest market in the world for the UFC on pay-per-view.

To this point, the UFC has made its explosive rise with little help from America’s fastest-growing demographic of Latinos. That is not because UFC has no Latino stars. Tito Ortiz was for many years the company’s top attraction. However, Ortiz’s persona was that of a colorful villain, and his style was heavily based on groundwork that would be unfamiliar to longtime boxing fans. He was not the right fighter at the right time. 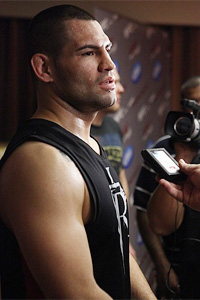 File Photo
UFC heavyweight champion Cain
Velasquez’s ascent has just begun.
Velasquez is a different story. His low-key demeanor may not stand out to American fans accustomed to big talkers with big personalities, but it plays particularly well with Mexican-Americans. That audience has continually embraced boxers who demonstrate humility outside the ring but fight with passion and heart inside it. Velasquez is a likeable person whose fights almost always deliver action and entertainment. That combination could play very well.

While Velasquez could be the fighter to introduce and popularize MMA with many Mexican-Americans, there are no guarantees.

Millions of people can’t be expected to embrace a sport solely on the basis of one competitor’s ethnicity. A great deal of time and effort still needs to be put into introducing and teaching about MMA.

At first, Velasquez is still primarily going to draw from UFC’s usual audience. It’s hard to believe he will ever be the star to that audience that Lesnar is, so Velasquez needs to bring in a substantial new audience over time if he is to produce comparable pay-per-view buy rates as champion.

If there is a danger in bringing in Hispanic fight fans, it’s that they will find MMA threatening to their traditional love of boxing. To that end, the UFC ought to bring in a Mexican boxing icon or two to do publicity tours with Velasquez. The endorsement of a Julio Cesar Chavez or Oscar De La Hoya would go a long way towards helping Mexican-American fans get behind Velasquez. If he is viewed as a successor to Mexico’s greatest boxing icons, it will pay huge dividends.

When buy rate numbers begin to trickle out for UFC 121, we’ll begin to see how well Velasquez is taking. But the real test will be Velasquez’s upcoming title defense against Junior dos Santos. The Brazilian is a worthy challenger and a compelling matchup, but he lacks the star power of Lesnar. If Velasquez-dos Santos generates numbers close to Lesnar-Velasquez, it will be a strong sign that the promotion of Velasquez has worked.

As a fighter, Velasquez has reached the top of the mountain. As a star, his ascent may have only just begun.