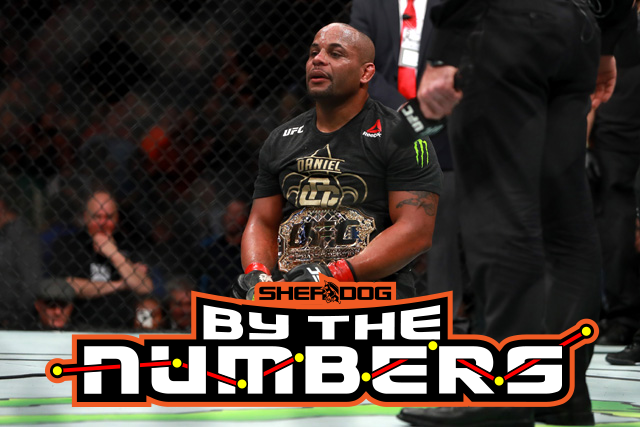 Daniel Cormier has not fought as a heavyweight since he decisioned Roy Nelson at UFC 166 on Oct. 19, 2013. It marked the end of a spectacular run at 265 pounds, as he won multiple belts and defeated two former Ultimate Fighting Championship titleholders in Frank Mir and Josh Barnett.

The American Kickboxing Academy captain will be back at his original weight class when he challenges Stipe Miocic for the undisputed heavyweight championship in the UFC 226 main event on Saturday at T-Mobile Arena in Las Vegas. There, Cormier can become only the fifth two-division titleholder in UFC history and just the second two hold championships in two weight classes simultaneously.

Ahead of Cormier’s bid for history, here are some of the numbers that have come to define the reigning UFC light heavyweight champion:

4: Titles to his name. Almost a year after his professional mixed martial arts debut, Cormier traveled to Australia to fight for Xtreme MMA. He found himself gunning for the promotion’s heavyweight championship in just the third bout of his career. Cormier stopped Lucas Browne with first-round punches and two weeks later was vying -- and winning -- another title, this time in King of the Cage. In 2012, the Lafayette, Louisiana, native took a unanimous decision from Barnett to win the Strikeforce heavyweight grand prix. He signed with the UFC the following year, but because longtime friend and training partner Cain Velasquez was still active at the highest levels of the heavyweight division, Cormier made the decision to drop to 205 pounds. He later submitted Anthony Johnson at UFC 187 to capture the vacant light heavyweight crown.

7: First-round finishes to his credit. Cormier built a reputation for finishing fights fast early in his career. He recorded his first victory by technical knockout in the second round and followed it with five consecutive first-round finishes. Cormier has disposed of Antonio Silva and Patrick Cummins inside one round since joining the UFC roster.

9: Wins by knockout or technical knockout. Cormier entered MMA as a wrestling specialist, but spending a considerable amount of time at the American Kickboxing Academy allowed him to advance his standup. The result has been nine strike-induced stoppages over the likes of Silva, Soa Palelei and Volkan Oezdemir.

4: Wins by submission. Cormier has proven that his grappling and ground game are perfect for MMA, having submitted the ultra-tough Dan Henderson after thoroughly dominating him on the mat. “DC” also used his submission savvy to nullify Johnson’s prodigious punching power on two occasions.

2: Fights in which he has recorded at least four takedowns. The former Olympian’s wrestling prowess was on full display against Barnett and Dion Staring. He has also tallied five bouts where he completed three takedowns against Johnson, Henderson, Nelson, Anderson Silva and Devin Cole. Moreover, Cormier is the only fighter other than Alexander Gustafsson to score a takedown on Jon Jones.

3: Successful title defenses at 205 pounds. In his first title defense, Cormier won by the narrowest of margins against Gustafsson. That was followed by finishes against Johnson and Oezdemir.