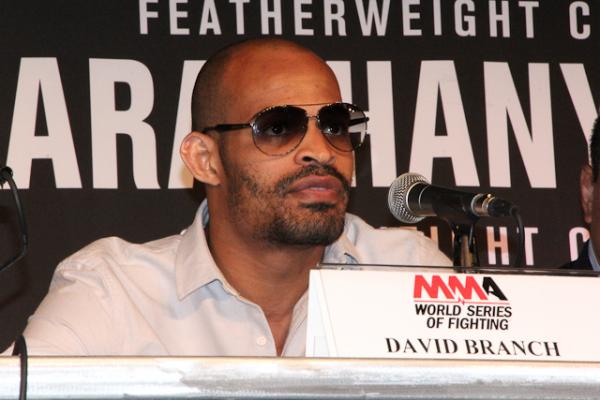 
Champions must have belief in their ability to get the job done wherever and whenever the need arises.

World Series of Fighting middleweight champion David Branch beams with confidence ahead of his title defense against Ultimate Fighting Championship veteran Yushin Okami in the WSOF 15 headliner on Nov. 15 at the USF Sun Dome in Tampa, Fla. The event will air on the NBC Sports Network at 9 p.m. ET/7 p.m. MT.

“I plan on defending my belt,” Branch told Sherdog.com. “I plan on finishing him, really. I’m just planning on a finish by submission or knockout. That’s what I see. I don’t think he’s going to make it.”

The 32-year-old Branch will for the first time defend the title he won with a first-round submission of “The Ultimate Fighter” Season 7 graduate Jesse Taylor at WSOF 10 in June. It marked Branch’s fourth straight win since suffering a close decision loss to current UFC light heavyweight contender Anthony Johnson at Titan Fighting Championship 22 in May 2012. Following the defeat, he signed with the World Series of Fighting and rattled off unanimous decision wins over Dustin Jacoby, Paulo Filho and Danillo Villefort to set up his crack at the vacant 185-pound championship. 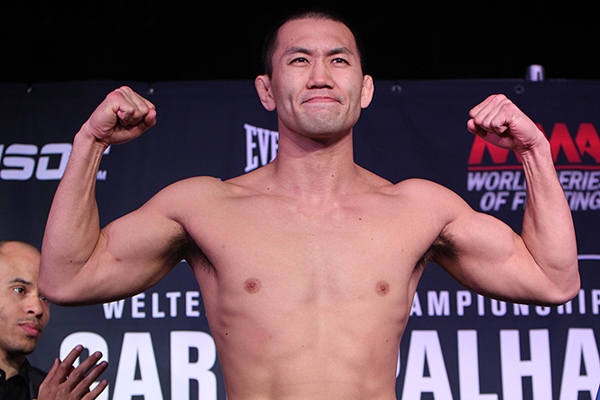 (+ Enlarge) | Photo: Dave Mandel/Sherdog.com
Okami has a proven track record.
“Since being with the World Series of Fighting, nothing’s changed but my mentality,” said Branch, who holds a Brazilian jiu-jitsu black belt under Renzo Gracie. “The best combat sports athletes, whether it be a boxer or an MMA fighter, all suffer losses. All of them do, especially when they face good competition. Now, I just believe in myself and I believe nobody can beat me on my best day. I just focus on me being offensive and doing what I want to do. I know I have all the tools to beat anybody in the world. I need to prove that to myself, and the world will see it.”

Branch’s argument about having faced good competition has merit. Aside from Johnson, the only other men to beat him are reigning WSOF welterweight champion Rousimar Palhares and former Shark Fights titleholder Gerald Harris. Both setbacks came inside the UFC, the Palhares loss in March 2011 leading to his being cut by the organization.

“When he went to the UFC, he was young in his career,” said WSOF Executive Vice President Ali Abdel-Aziz. “I knew how good he was when I saw him in the gym, and I knew he’d be a good fit for WSOF. When you see his fight with [Johnson], he almost finished him; and now Johnson is running through people. David’s more mature now. He’s a great fighter with good boxing, and his conditioning is unbelievable. Any promotion would want to have a guy like him. He’s peaking in his career right now.”

Abdel-Aziz believes a pep talk after the victory over Jacoby sparked a more spirited effort from Branch in recent fights.

“When David came to the WSOF and his first fight wasn’t that impressive, I told him this was his time to shine and show people what he could do,” he said. “He dominated the fight with Filho and you saw what he did with Jesse Taylor. I told him that Okami is a great fighter, and David told me, ‘I’m greater.’ David has told me he’s going to finish him. This is going to be a great fight.”

Branch is one of the few fighters in the sport to have victories in Bellator MMA, the UFC and the World Series of Fighting. His career stretches back to September 2007, and he has won 14 of his 17 professional fights, earning eight finishes, four by knockout or technical knockout and four more by submission. Branch claims his preparations for the fight with Okami have gone well and that he is right where he needs to be to make the 185-pound limit the day before the fight.

“Camp is going pretty good,” he said. “Camp is hard, but the training is good and everything is going according to plan. My weight is perfect. I don’t walk around too, too big. I am a big middleweight, but I like to walk around at a decent weight so it’s not so hard to cut.”

“
I know I have all the
tools to beat anybody in
the world. I need to prove
that to myself, and the
world will see it.

Even though Branch’s preparations have gone well, he will be facing a battle-tested veteran in Okami, a former UFC title challenger who holds wins over ex-Bellator champion Hector Lombard, former middleweight King of Pancrase Nate Marquardt, onetime UFC titleholder Evan Tanner, Alan Belcher (twice) and others. Okami has fought 38 times in a career that dates all the way back to 2002, giving him a decided experience edge over Branch. However, Branch refuses to be intimidated by any of the names on Okami’s resume or the experience he brings to the table.

“I think Yushin is an experienced fighter and all that,” he said. “I really like the fact that I get a chance to fight a top-10 guy like that. Other than the experience, he’s a tough dude, but I don’t see anything too crazy. He’s just a tough guy.”

Branch does not concern himself with Okami’s plans. Instead, he remains focused on what he needs to do to be successful in the bout.

“I just have to be me,” Branch said. “I never go into a fight with a specific game plan. I just stay aware of what they try to do and have a good defense [for] what they like to do. Different opportunities open up as fights go along. I’m just going to use my game and look to finish him. It might be strikes or maybe I take him down and get a submission. I’m just going to be very offensive and tenacious. I’m not sure what’s going to happen, but I just want to be good at everything.”