NAGOYA, Japan -- Rage drove Hayato “Mach” Sakurai when he leveled Shinya Aoki in the Dream 8 main event before 9,129 at Nippon Gaishi Hall on Sunday and violently concluded a three-year grudge between them.

“It was anger,” Sakurai said. “He was basically saying that I was old and past my prime. I wanted to give him a one-second ass kicking for that. Anyone who would hear something like that would, of course, be pissed. I don't really remember what happened. Wasn’t it like 15 seconds? During my Shooto days, I used to be able to finish guys in seconds. I was really happy that I could do it again.”

Sakurai’s pre-fight comments revolved around his distaste for Aoki’s approach in relation to his own well-rounded “free style.” Aoki focused on Sakurai’s long history in the sport and essentially indicated that he would show “Mach” how antiquated he was compared to fighters of Aoki’s generation.

“He said my style was very old, but my techniques still work. I want to show the crowd that I can win this whole tournament with this old style,” Sakurai said. “In all honesty, I don’t really see my style as being old. Preparing for the fight, I surrounded myself with old schoolers like [Noboru] Asahi and [Matt] Hume. They were all just as happy as I was for beating Aoki.”

While the defeat was certainly crushing for Aoki, the setback did not discourage him from staying the course. His eyes still shiny and swollen from crying, the lightweight reaffirmed his commitment to Dream and to the sport.

“I love Dream, and I love MMA more than anyone else out there,” he said. “I felt that I was doing my best to lead Dream, but, well, [Sakurai] was really strong. However, I won’t stop here. I won’t stop being Shinya Aoki, and Shinya Aoki’s way of life will not stop. There were so many things I wanted to do, say and realize if I’d won, but that doesn’t mean I’m ready to throw those things aside because I lost. I’m going to give it my best and start all over from scratch. Only I can do these things. I absolutely truly believe this.”

Naturally, Aoki recalls little of the 27-second bout. When one Japanese reporter asked Aoki which of Sakurai’s knees knocked him out, he found it difficult to answer. 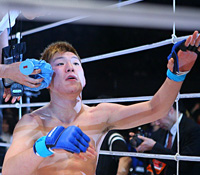 Daniel Herbertson/Sherdog.com
Sakurai lit up Aoki
in just 27 seconds.
“Well, I don't quite remember the fight, so maybe the first one?” he said. “I got hit however many times, so I don’t know.

“Poor me,” added Aoki with a good-natured chuckle.

The fallout from the match more or less resulted in reconciliation between the two Japanese standouts, at least in public.

“Because we were badmouthing each other a lot before the fight, I told him, ‘That was bad, wasn’t it? Let’s be friends now,’” Sakurai said. “But since I saw his eyes roll back and turn white when I kneed him, and he still looked pretty gone afterward, I figured the knees were probably too effective. I doubt he even remembers what I said.”

While he did not confirm that he remembered Sakurai’s request for friendship, Aoki admitted he had a newfound respect for the veteran.

“I feel like telling him, ‘Truly, thank you very much,’” he said. “I don’t have any really special feelings. I just want to tell him, ‘Sempai (Japanese for one’s senior or elder], you are strong.’”

As for Aoki’s immediate future, the second-ranked lightweight indicated he plans to focus on his customary weight after Sakurai spoiled his brief return to 168 pounds.

“I’m going to rebuild myself as a lightweight, because I am a lightweight,” he said. “I’m not making any excuses, but really, Shinya Aoki the lightweight just decided to challenge himself as a welterweight. I stepped up in weight, threw down, and I lost.”

As for Sakurai, the win not only squashed a lengthy feud with Aoki but punched his ticket to the next round of the welterweight grand prix.

“Whoever I’ll have to face, they’re going to be very strong,” he said. “Before the fight, I was telling myself, ‘There’s only going to be Japanese fighters remaining [after this round], won’t there?’” 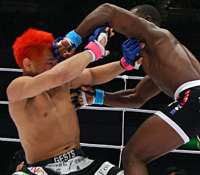 The Bodyshop’s Jason High blitzed Yuya Shirai to claim a spot in the next round of the welterweight tournament, as he showed his resilience and rebounded from a brutal knockout loss to former International Fight League champion Jay Hieron at Affliction “Day of Reckoning” in January.

“It felt great. It’s kind of like how you’d want all of them to go,” High said. “I look forward to coming back. If the next round was tomorrow, I would be ready to go.”

High not only dazzled with the sheer power of his punches but slipped in a rear-naked choke that left Shirai limp within seconds.

“Generally, I like to pick people up and throw them out of the ring, but that’s against the rules, I think,” High said. “But I guess chokes, like guillotine chokes or rear-naked chokes are my favorites. Anything that’s given to me, I’ll take.”

Marius Zaromskis also advanced to the semi-finals and impressed in his match against Seichi Ikemoto. Quickly dubbing his new somersault knee stomp “The Samurai,” Zaromskis expressed an appreciation for Ikemoto’s “secret tactic” of a double-fisted punch, dubbed “double hammer” by the Japanese welterweight.

“I respected his [double] punch,” Zaromskis said. “He’s not like everyone else. When he fights, he wants to surprise everyone. That’s why I was really happy with the fight.”

Meanwhile, Andre Galvao moved on in the tournament at the expense of Xtreme Couture’s John Alessio, as he submitted the World Extreme Cagefighting and UFC veteran with a first-round armbar.

“Alessio was a highly experienced opponent,” Galvao said. “I was very fortunate to have a good gameplan that led me to a submission victory. I want to make it to the finals and take the whole tournament. I want to continue to show everyone the evolution of my jiu-jitsu in MMA. Please keep an eye out for it.”