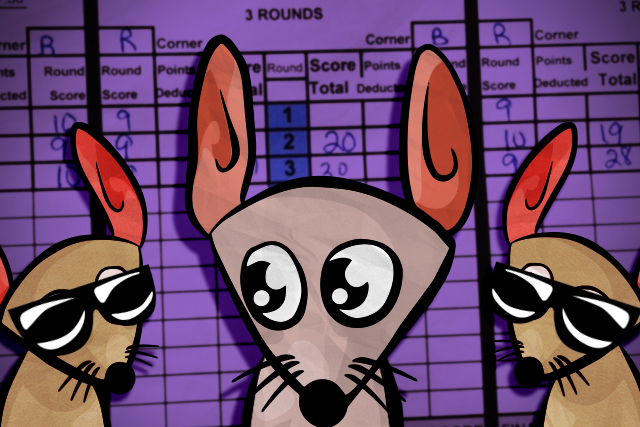 What do you see as the biggest problem facing mixed martial arts today? However deeply or unconditionally you love this sport, you must admit there are plenty of options from which to choose. Maybe you believe performance-enhancing drugs are the biggest problem. Whether you believe PED users are cheaters undermining the sport’s integrity or you simply hate that the increased scrutiny of the post-USADA Ultimate Fighting Championship has led to unprecedented numbers of fights being canceled due to injuries and blown weight cuts, you can make a solid case.

Do you feel fighter pay is the main obstacle holding back the sport from the full measure of its greatness? Your main complaint may be that today’s fighters aren’t compensated well enough or that there isn’t enough purse money to keep tomorrow’s so-called “A-level” athletes from gravitating to boxing or stick-and-ball sports. Maybe you agree with the argument Sherdog columnist Eric Stinton put forth so eloquently this week, that even leaving aside the dollar amounts, the very structure of fighter pay is capricious, illogical and, most importantly, not conducive to producing the best fights. In any case you have a great argument.

Perhaps you’re most concerned about the growing dependence on sensationalist, “cotton candy” matchmaking at the sport’s highest levels. MMA has always been part circus, an uneasy three-way hybrid of sideshow, street fight and legitimate sport with mainstream aspirations. However, there is no question that the UFC’s ownership group, Endeavor, is looking increasingly desperate. As the promotion, the media and the fan base cast about for the next Conor McGregor or Ronda Rousey -- all while remaining deeply divided about the current McGregor and Rousey -- merit-based matchmaking is taking more and more of a back seat, replaced by a growing pattern of fighters talking their way into fights and even into contender status, often through transparently offensive trollery, like that of Colby Covington. If you believe that’s the biggest problem in the sport today, you have a solid argument.

In any given week, any of those might be my answer. This week, my answer is that judging is the biggest problem this sport faces. It is foremost in my mind thanks to Invicta Fighting Championships strawweight title in the Invicta 28 on March 24, when a typically fun night of fights by the world’s premier women’s MMA promotion was marred by a couple of questionable scorecards and at least one that was infuriating and inexplicable.

Understand that “infuriating and inexplicable” are not terms I throw out lightly. Not every score I disagree with is a bad one. Not every contentious or controversial decision is a robbery. Even a split decision is not necessarily an indication of a poorly scored fight: Reasonable minds can differ on scoring, even when the criteria are agreed upon and clearly understood. Scoring a close round often comes down to matters of subtle, nearly abstract personal judgement, of whether a judge ascribes more value to Fighter A’s damaging leg kicks or to Fighter B’s credible guillotine attempt that might have ended the fight if not for the bell.

When I say that judge Rochelle Montanez’s 49-46 scorecard in favor of Mizuki Inoue at Invicta 28 is infuriating and inexplicable, I mean that it would be impossible to defend with any understanding of the basic criteria upon which mixed martial arts bouts are supposedly judged. It leaves me questioning not only whether Ms. Montanez knows how to judge mixed martial arts but whether she was even watching the fight.

If you haven’t seen Virna Jandiroba’s split decision win over Mizuki in their strawweight title fight, I suggest you catch it on UFC Fight Pass. It is surprisingly tense viewing for such a one-sided affair. If you are disinclined to do so, the short version is that Jandiroba grounded Mizuki with relative ease in every round and put on a top-position grappling clinic, passing or threatening to pass guard repeatedly while landing effective ground-and-pound. In the third round, Jandiroba passed Mizuki’s guard, took her back and was working on a legitimate armbar attempt when the horn sounded.

The fight was a near-shutout by Jandiroba, maybe not a “Beatdown of the Year,” but a fight in which the winning fighter arguably won every minute of every round. Tristen Critchfield, in his capacity as Sherdog’s official play-by-play man for the event, scored the fight 50-44 for Jandiroba with a 10-8 third round. The judges’ scores -- 49-46 by Dan Furse and Rich Montanez, 46-49 by Rochelle Montanez -- are dreadful. Sadly, mmadecisions.com, our faithful friend in shining a light into the cesspool of MMA judging, does not provide round-by-round scores for this fight, only the final tallies. I would love to know which round Mr. Furse and Mr. Montanez gave to Mizuki. The closest round was probably the fourth. There, Mizuki connected with several nice strikes on the feet and landed a takedown of her own, though she was quickly swept. Even that round, though, was a solid 10-9 for the Brazilian, in my opinion. If anyone scored it for Mizuki, I can only attribute it to perception skewed by it being less of a severe beating than the other rounds.

Ms. Montanez’s 46-49, on the other hand, stands alone in its mind-boggling incompetence. Assuming she scored the third for Jandiroba, she gave all four other rounds to Mizuki, including the first, wherein she spent four minutes on the bottom eating strikes that swelled her left eye nearly shut. I cannot overstate how ludicrous, how inexcusable this scorecard was. Not only did Ms. Montanez get at least four of five rounds wrong by the standards of good MMA judging, but she was beyond even the usual standards of bad MMA judging. What about the “MMA judges don’t understand offense from the bottom” argument? Mizuki mounted little offense from the bottom and was constantly busy defending herself. What about the “Well, if it was in the street” trope? In the street, this fight would have been finished half a dozen times; every single round ended with Mizuki on the bottom, unable to get up, either being punched or defending a submission. How about the old “Look at his face, now look at mine” test, a la Georges St. Pierre-B.J. Penn 1? Mizuki’s eye was such a mess after the first round that I was mildly surprised the fight made it to the final horn. Jandiroba barely got her braids tousled.

Ms. Montanez’s scorecard is especially pernicious because the right fighter ended up winning in spite of it. Though that sounds counterintuitive, it makes this fight and others like it dangerous in a different way. We tend to remember unjust fight outcomes. Our outrage in the moment burns hotter. We are reminded of them when this site and many others hand out their “Robbery of the Year” awards. Fighters gain reputations for being the frequent victim -- or beneficiary -- of sketchy decisions.

Fights like Jandiroba-Mizuki are sneaky. Because MMA judging is so consistently inconsistent that an event without at least one head-scratching decision feels like a rarity, we tend to forget atrocious individual scorecards quickly. There is a sense of relief that the correct fighter won and there was at least no actual robbery this time. It’s an understandable but dangerous mindset, one that Sherdog administrative editor and radio fixture Jordan Breen calls the “all’s well that ends well” fallacy.

Of course, all is not well. An acceptable result arrived at by a broken process is a hollow victory at best. It’s like playing darts in the dark; even if you hit the bull’s-eye once in a while, you have nothing to celebrate but your sheer dumb luck. Imagine if drunk driving were a crime only if the driver got in an accident, or if the Federal Aviation Administration stopped grading and investigating near-misses and ordered inquiries only if a plane actually crashed. Of course, the stakes in a cage fight are not remotely the same, but the principle is similar. “All’s well that ends well” is not a healthy mindset, and judging a process by its outcome alone will never lead to lasting improvement.

I don’t have any easy solutions for this problem. Considering that the same handful of infamous names have been ruining MMA decisions for over a decade, their entrenched positions at the judges’ table seemingly impervious to public outrage, there may not be any. That doesn’t mean I’ll stop being angry about it, and to whatever extent you care about this zany sport of ours, I hope you won’t, either.