MMA seems reminiscent of boxing as of late in that superfights for true No. 1 status have been few and far between. Every time a mega bout does happen though, both fans and the industry are on the edge of their seats.

Polish promotion KSW has managed to put together such a dream fight for Europe at KSW “Extra” on Sept. 13 in DÄ…browa GÃ³rnicza.

In one corner Mamed Khalidov, the promotion’s superstar, has reeled off eleven straight victories and only had to go the distance once in doing so. The 27-year-old Chechen wrestler combines excellent submission skills with an improving standup game, earning his nickname “Cannibal” by aggressively going after his opponents in the ring.

Spanish standout Daniel Tabera (Pictures) will stand across the ring from Khalidov. The man from seaport city Valencia has been in the game for over six years and has fought all over the world, including Russia, the U.S. and Japan. Despite being a natural middleweight, Tabera has fought all the way up to heavyweight in the past and sported an undefeated record until judges handed him a dubious loss in Russia last spring when he faced Roman Zentsov (Pictures). Even Fedor Emelianenko (Pictures), a training partner to Zentsov, publicly said that he thought that Tabera had won.

Both fighters are recognized among the top five 205-pound fighters in Europe.

“I knew him from M-1 only, but when I saw his record on Sherdog.com, I thought I am glad we will see each other in the ring,” said Khalidov of Tabera. “He is a very good fighter and it will be a very tough bout.”

“Khalidov has already demonstrated that he is a top fighter, not only because of his amount of victories, but also with the quality of them, so I am sure that this will be a very, very tough fight.”

Overeem will first face Mirko “Cro Cop” Filipovic at Dream 6 on Sept. 23 at the Saitama Super Arena in Saitama, Japan.

“The fight is 90 percent sure,” Overeem said of the Goodridge tilt. “I plan on staying very busy this fall and winter with the upcoming fight against ‘Cro Cop,’ then the bout against ‘Big Daddy’ and a possible battle on New Year’s Eve to top off the year.”

The only stumbling block for a Overeem-Goodridge clash could be Dream offering an even more interesting bout for the 28-year-old kickboxer on the show they are trying to put together in November.

Other bouts also scheduled for Glory’s trail include: 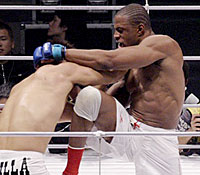 Both men have competed for the WFC in the past with Lenogue knocking out Gracie Barra black belt Igor Araujo and submitting Arslanbeck Ashkarov. Guedjev split a pair of bouts with Novo Uniao Brazilian jiu-jitsu black belt Fabricio Nascimento (Pictures) and Italian San Da stylist Michele Verginelli. Just like last year, Lenogue will be very busy this fall, having already accepted another fight three weeks later at “Hell Cage” on Oct. 19 in Prague, Czech Republic.

Casimir, who recently scored a big win over Shinji Sasaki (Pictures) at “Shooto Tradition” in Japan, is the pre-fight favorite to win the 155-pound tournament. The 28-year-old Haute Tension fighter will take on Finnish submission specialist Anton Kuivanen, who comes down from welterweight to be part of the tournament in one of the semifinals. In the other bracket, local hero Vaclav Pribyl squares off against well-rounded Irishman Kevin McAlonan.

In the 185-pound tournament, Lenogue will start against Tomas Kuzela, from Gladiators Prague. Even though the Czech fighter has dropped his last three straight, he possesses some serious knockout power and has put some solid competition to sleep with single punches. Austria’s David Marcina and Finland’s Teemu Inkeroinen will fight in the second semifinal.

Also on the docket:

German welterweight Daniel Weichel will challenge Englishman Peter Irving (Pictures) for the Strike & Submit European welterweight title in the promotion’s eighth event on Oct. 26. Weichel recently spent some time at Gracie Fusion in Rio de Janeiro to sharpen his already strong jiu-jitsu game. The 23-year-old Hessian has gone 3-3 over his last six fights, after getting knocked out by UK standouts Paul Daley (Pictures) and Dan Hardy (Pictures), as well as Dutchman Jason Jones.

Irving, who hails from Newcastle in northeastern England, has put his slump behind him and is undefeated in his last five fights. He stopped a trio of fellow countrymen and won a decision over highly regarded Swedish wrestler Reza Madadi.

The bout promises to be a lot closer than many people on both sides of the English Channel think though. Weichel should hold a distinct advantage once the fight hits the mat. At the same time the young German’s chin is still suspect and he has had a tendency to walk straight into standing knee strikes in the past. Couple that with the Brit’s striking talent and durability and you have a war in the making.

For more mixed martial arts news coverage in the German language, log on to Ground & Pound at www.groundandpound.de