Griffin, 29, fighting out of the Xtreme Couture camp, had taken the center of the Octagon in the first round. He kicked well throughout the period, but Evans connected with a punch to the body and snuck in a jab and a left hook. The round was close, though the second stanza more clearly belonged to Griffin.

In that period, Evans began by sticking some jabs in his opponent’s face. Griffin retaliated with a right hand that hurt Evans, however, and followed with a kick before a brief brawl ensued. When a more measured pace resumed, Griffin continued with his advantage but ate a right hand and landed his own before the round closed.

Evans, 29, caught a kick in the third, moved the fight to the mat and did significant damage with a series of hammerfists. Griffin seemed to recover for a while, but Evans kept up his offense from the top position. After posturing up, Evans smashed a right hand into the titleholder’s chin. The Greg Jackson-trained fighter then stood and let loose left after left on Griffin, who appeared to tap as the fight was called at 2:46.

“I was flailing, not tapping,” said Griffin, who fell to 16-5. “I was done at that point. I didn't know what was going on. It was actually just his punches giving my body motion. I'm fine. I'll be back.”

Griffin explained that he was hurt as he went to the ground, citing what he called a “pretty pathetic, lazy guard.”

“I knew I had him in trouble,” Evans said. “He kept smiling, so I didn't know if he was hurt or not. They kept letting me hit him, so I was like, ‘Alright.’” 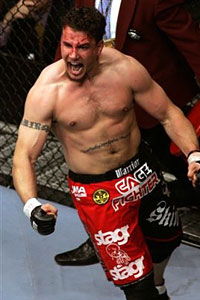 Mir came out punching in what was the performance of his career. He snapped Nogueira’s head back before scoring a takedown. No action followed from the Brazilian jiu-jitsu black belts on the ground; Mir let Nogueira stand. Back on the feet, Mir began dominating with a slick right uppercut out of his southpaw stance. He’d step in with it, and if it didn’t catch Nogueira, then his straight left did.

By the end of the first round, Nogueira had been floored twice with left hands. He fell for a third time after absorbing two left hooks in the second round. Mir followed up with punches until referee Herb Dean intervened at 1:54.

The loss marked the first time Nogueira, 31-5-1, had been stopped.

“I've faced such demons after my wreck,” said Mir, 29, whose career had seemed finished after he was struck by a car while riding his motorcycle in September 2004. “To come back and fight the best heavyweight to ever fight in the UFC and get a win over him after what I've gone through, it just shows … I'm proof you can do things. I didn't think I could beat Nogueira. If I was a betting man, I wasn't on Mir's side tonight. I came through this with the love of my family, my children, my wife, everybody.”

Next for Mir is a title unification bout against UFC heavyweight champion Brock Lesnar.

“I don't want any of this s--- that I'm half the champ,” Mir said. “I beat Nogueira. [Lesnar] beat a champion in Randy Couture. Let's see if he can make it out of the first round, but hey, this time I'll make him famous on the break that I do to him.”

After taking two beatings from Wanderlei Silva, Quinton Jackson paid back the Brazilian Saturday with a left hook to the jaw that knocked him out 3:21 into the first round.

Silva had been kicking well to Jackson’s lead leg, much like Forrest Griffin had done to “Rampage” when he took the UFC light heavyweight title from him in July. Jackson shot for a takedown but wasn’t close to getting it. On the feet, though, the former UFC champion kept his punches tight while Silva, though somewhat conservative relative to past performances, still showed a desire for a toe-to-toe slugfest.

In the exchange that ended the fight, “The Axe Murderer” began to wing his strikes. Jackson covered up well, countered with the hook and dropped Silva cold to the canvas.

File Photo
The third time was
a charm for Quinton Jackson.
“Rampage is back. I ain't going nowhere,” said Jackson, now 29-7, who was fighting for the first time since his loss to Griffin and a mental breakdown that led to his arrest.

The 30-year-old fighter credited the Wolfslair camp in England for his successful return.

“I'm just getting myself back together,” Jackson said. “I got to get my mind right, got to start training. I had to start all over. I had a new training camp, a new manager, everything. God is on my side. Praise be to him most high, ain't no lie.”

Mike Massenzio, who entered the Octagon with a heavily bandaged knee, took some strikes to his body before stunning CB Dollaway on the feet in their middleweight bout. Dollaway, the runner-up on the seventh season of “The Ultimate Fighter,” then found himself in a guillotine choke after he had tried for a single-leg takedown.

Dollaway escaped the submission attempt, though, and took control. Representing Arizona Combat Sports, the 25-year-old was dominant on the ground, where he mounted Massenzio, flattened him out and pounded him with punches until referee Yves Lavigne stopped the fight at 3:01.

“I was just surprised that he laid there,” Dollaway said. “I figured he'd try to get out and fight back. But Mike's a tough competitor. … I felt strong out there tonight, so I was just glad to come out with the victory.”

In the main card opener, Cheick Kongo stopped Mustapha al Turk at 4:37 of the first round. Al Turk, a heavyweight from London who has making his UFC debut, spent much of the stanza trying to finish a single-leg takedown. Kongo defended well, however, and smashed elbows into his opponent’s head while still standing.

The action slowed when the fighters traded accidental knees below the belt. Following a restart, Kongo dropped al Turk with a flurry of punches and followed up with a brutal onslaught of elbows and hammerfists until referee Steve Mazzagatti called the fight.