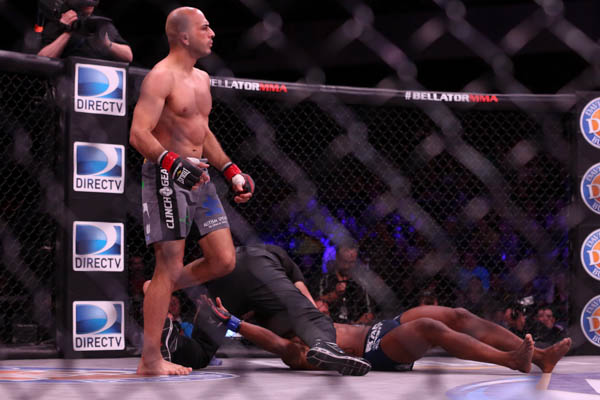 Will Brooks will look to exact some vengeance in the lightweight semifinals. | Photo: Will Fox/Sherdog.com

Will Brooks will meet Saad Awad in the Bellator MMA Season 9 lightweight tournament semifinals at Bellator 105 on Friday at the Santa Ana Star Center in Rio Rancho, N.M. Their rematch arrives eight months after Awad handed Brooks the first loss of his career with a stinging 43-second knockout. To the victor goes a spot in the tournament final, opposite either Ricardo Tirloni or Alexander Sarnavskiy.

Awad has won seven of his past eight bouts. The 30-year-old former Gladiator Challenge champion last fought at Bellator 101 in September, when he submitted “The Ultimate Fighter” Season 9 alum Martin Stapleton with a first-round rear-naked choke at the Moda Center in Portland, Ore. Spawned by the Millennia MMA camp, Awad has secured 13 of his 15 professional victories by knockout, technical knockout or submission.

Brooks will enter the cage on the strength of a two-fight winning streak. The 27-year-old Chicago native punched his ticket to the semifinals with a unanimous decision over Ultimate Fighting Championship, Pride Fighting Championships and World Extreme Cagefighting veteran John Alessio at Bellator 101. Brooks burst on the international scene on New Year’s Eve, when he stopped onetime Sengoku champion Satoru Kitaoka on second-round punches at a Dream event in Japan.

With the Brooks-Awad rematch as the centerpiece, here are 10 facts surrounding Bellator 105:

FACT 1: Tirloni’s first defeat as a professional came at the hands of Benson Henderson, who went on to capture lightweight gold in the UFC and WEC. Tapped out by a “Smooth” guillotine choke, it remains the lone submission loss of the Brazilian’s career.

FACT 2: Sarnavskiy has finished 17 opponents in the first round, five of them in less than a minute.

FACT 4: Six of Ron Sparks’ 10 career bouts -- four of his wins and both of his losses -- have concluded within 60 seconds.

FACT 5: British striker Eugene Fadiora is the only man to have defeated Brad Scott outside of the UFC, as he struck “The Ultimate Fighter: The Smashes” finalist into submission at a Spartan Fight Challenge event in October 2009.

FACT 6: Journeyman Eddie Larrea is 0-6 in fights that reach the judges.

FACT 8: Jesse Brock was the last man to face current UFC flyweight champion Demetrious Johnson before he signed with Zuffa. He was felled by a first-round head kick from “Mighty Mouse” at an Alaska Fighting Championship show in February 2010.