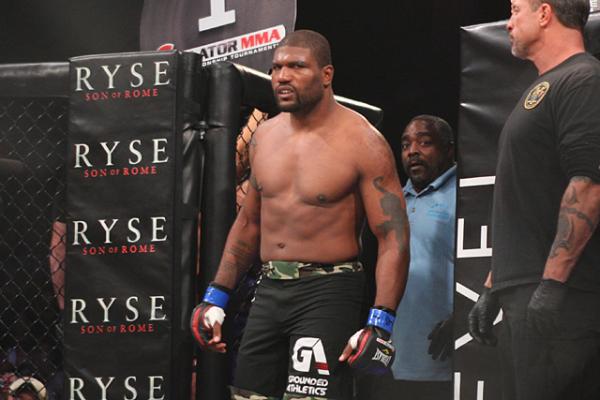 Quinton Jackson has plans for another run at a major MMA title. | Photo: Keith Mills/Sherdog.com

Former Ultimate Fighting Championship titleholder Quinton “Rampage” Jackson will make his sophomore appearance under the Bellator MMA banner, as he battles Christian M’Pumbu in the Season 10 light heavyweight tournament semifinals at Bellator 110 on Friday at the Mohegan Sun Arena in Uncasville, Conn. Recent struggles aside, the 35-year-old remains one of the sport’s most intriguing personalities.

Jackson threw the brakes on the first three-fight losing streak of his storied career at Bellator 108 in November, when he wiped out Joey Beltran with first-round punches at the Revel Casino in Atlantic City, N.J. An accomplished 44-fight veteran, he has delivered 22 of his 33 career victories by knockout, technical knockout or submission. “Rampage” carries with him an outstanding resume that includes wins over six former UFC and Pride Fighting Championships titleholders: Chuck Liddell (twice), Dan Henderson, Lyoto Machida, Kevin Randleman, Murilo Bustamante and Wanderlei Silva.

M’Pumbu will enter the cage on the heels of back-to-back defeats, though the 36-year-old Frenchman has not competed since he surrendered the Bellator light heavyweight crown to Attila Vegh roughly a year ago. Crafty and durable but long considered undersized for the weight class, “Tonton” has never before been stopped by strikes. M’Pumbu burst on the American MMA scene in 2011, when he defeated Chris Davis, Tim Carpenter and Rich Hale to become the first 205-pound champion in Bellator history.

With the Jackson-M’Pumbu showdown as the centerpiece, here are 10 facts surrounding Bellator 110:

FACT 1: Muhammed Lawal was one of six men to hold the Strikeforce light heavyweight championship, along with Bobby Southworth, Renato Sobral, Gegard Mousasi, Rafael Cavalcante and Dan Henderson. Only Southworth managed to successfully defend the title.

FACT 2: Mikhail Zayats was a gold medalist in combat sambo at the 2008 Sambo World Championships in St. Petersburg, Russia.

FACT 4: Once regarded as one of the world’s top 10 featherweights, Diego Nunes has not recorded consecutive victories since he defeated Tyler Toner and Mike Thomas Brown in a three-month span more than three years ago.

FACT 5: Brazilian prospect Goiti Yamauchi, 21, will enter the Season 10 featherweight tournament on the strength of an 11-fight winning streak.

FACT 6: Matt Bessette was diagnosed with leukemia at the age of 3, with doctors giving him a 50/50 chance of survival.

FACT 9: Bulgarian light heavyweight Atanas Djambazov has secured all 18 of his professional victories by knockout, technical knockout or submission.