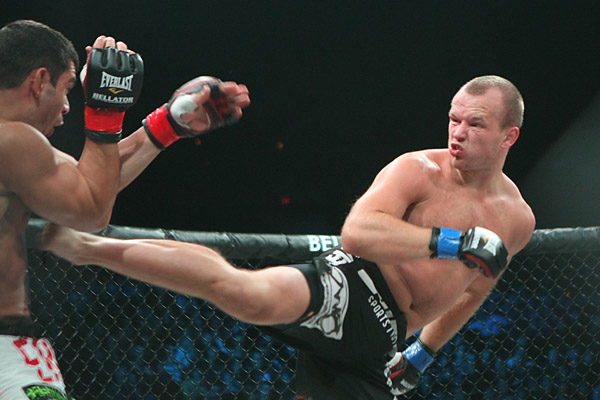 
In terms of sustained excellence, there may be no more accomplished fighter on the Bellator MMA roster than Alexander Shlemenko.

The Russian “Storm” will defend his middleweight championship against Season 9 tournament winner Brennan Ward in the Bellator 114 main event on Friday at the Maverik Center in West Valley City, Utah. Having captured the vacant 185-pound crown in February 2013, the 29-year-old Shlemenko has won 12 fights in a row and 27 of his past 29.

Shlemenko last fought at Bellator 109 in November, when he took care of former World Extreme Cagefighting titleholder Doug Marshall with a first-round body punch at the Sands Casino Event Center in Bethlehem, Pa. The Rusfighters Sport Club representative has secured 36 of his 49 career victories by knockout, technical knockout or submission. Shlemenko has not lost a fight since he dropped a five-round decision to American Top Team’s Hector Lombard more than three years ago.

Ward will enter the cage on a four-fight winning streak. The 25-year-old wrestled collegiately at Johnson & Wales University in Providence, R.I., where he was an NCAA All-American and a national runner-up at the Division III level. His 72 career wins rank 15th on the school’s all-time list. “The Irish Bad Boy” earned his shot at the title with a second-round technical knockout against Mikkel Parlo at Bellator 107 on Nov. 8. All but one of Ward’s 10 professional bouts have ended with a finish, including his only defeat -- a 15-second armbar-induced submission to Aaron Johnson at Bellator 89.

With the Shlemenko-Ward middleweight title bout as the centerpiece, here are 10 facts surrounding Bellator 114:

FACT 4:: Philadelphia’s Will Martinez holds the rank of black belt in Brazilian jiu-jitsu under Carlos Machado.

FACT 8: Justin Wilcox is 9-1 in fights that reach he judges.

FACT 9: Jordan Smith has yet to win inside the Bellator cage, with losses to Jesse Juarez, Andrey Koreshkov and David Rickels. Those three men are a combined 51-13.

FACT 10: The Maverik Center opened in September 1997 at a cost of $54.1 million and served as an ice hockey venue for the XIX Olympic Winter Games.