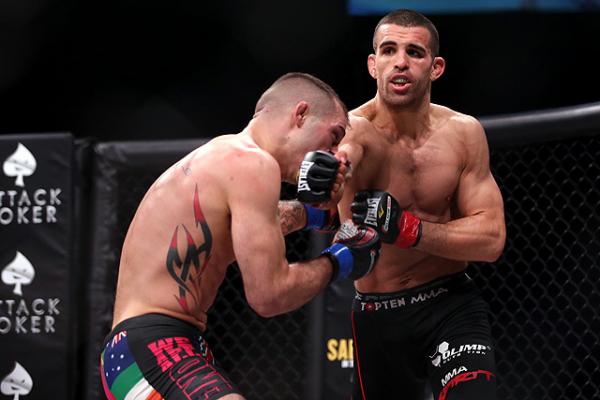 
Their names are in lights.

Weichel has won 10 of his last 11 fights and advanced to the final with back-to-back victories over Scott Cleve and Matt Bessette. The 29-year-old German grappler sports 20 submissions among his 33 career wins, 16 of them via choke. Weichel last fought at Bellator 114 in March, when he earned a unanimous decision over Bessette at the Maverik Center in West Valley City, Utah.

Green was a two-time Mid-American Conference wrestling champion at the University of Buffalo. The 24-year-old Team Bombsquad representative has rattled off five victories in six appearances and punched his ticket to the final with decision wins against Mike Richman and Will Martinez. Green has gone the distance nine times in his 12-fight career.

With the Weichel-Green tournament final on the marquee, here are 10 facts surrounding Bellator 119:

FACT 1: Nova Uniao’s Marlon Sandro is one of three men to have held the featherweight King of Pancrase championship. Yoshiro Maeda and Takumi Nakayama are the others.

FACT 2: Onetime International Fight League cornerstone Chris Horodecki was 17 years old when he made his professional MMA debut under the Ultimate Cage Wars banner on June 18, 2005.

FACT 3: Undefeated heavyweight Raphael Butler has finished three of his eight fights in 64 seconds or less.

FACT 5: When John Alessio climbs into the cage at Bellator 119, a total of 5,082 days will have passed since he challenged Pat Miletich for the Ultimate Fighting Championship welterweight crown at UFC 26.

FACT 7: A Psychout MMA champion, Adrian Miles trains under UFC mainstay Alan Belcher. He appeared on Season 19 of “The Ultimate Fighter” but failed to advance beyond the elimination round.

FACT 8: English heavyweight Stuart Austin will enter his promotional debut at a perfect 7-0, but the seven men he has defeated own a combined 3-14 record.

FACT 9: Seven of Eric Wisely’s eight career losses have come by decision, the lone exception being his calf slicer-induced submission defeat to Charles Oliveira at UFC on Fox 2 in January 2012.

FACT 10: With the conclusion of Bellator 119, the Bellator MMA organization will have staged six events in Canada. The others were Bellator 47, Bellator 64, Bellator 67, Bellator 76 and Bellator 79.