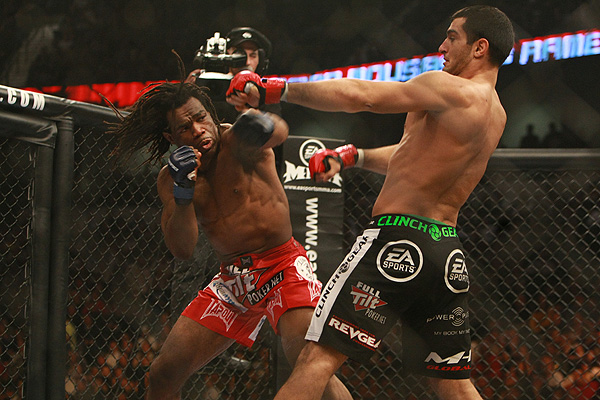 
Greatness was once forecast for Rameau Thierry Sokoudjou. Reality wove a different tale.

The 30-year-old Team Quest representative will make his Bellator MMA debut in a featured 205-pound clash with Terry Davinney at Bellator 121 on Friday at the Winstar World Casino in Thackerville, Okla. Sokoudjou has gone a mediocre 10-11 since back-to-back knockouts against Antonio Rogerio Nogueira and Ricardo Arona under the Pride Fighting Championships banner put him on the global map.

Sokoudjou will carry a two-fight losing streak into his match with Davinney. The California-based Cameroonian judoka last appeared at a Fight Nights event in December, when he succumbed to first-round punches from Konstantin Erokhin at Russia Concert Hall in Moscow. A longtime training partner of former two-division Pride champion Dan Henderson, Sokoudjou has secured nine of his 14 career victories by knockout or technical knockout.

Operating out of the Team Shoot camp in Michigan, Davinney dazzled in his Bellator debut in November 2012, knocking out Matt Van Buren in 15 seconds. However, the 28-year-old has dropped back-to-back bouts since. He last competed inside the Driller Promotions organization in April, when he wilted to punches from Travis Wiuff. Davinney has delivered more than half (six) of his 10 professional wins by submission.

With the Sokoudjou-Davinney light heavyweight battle as one of the showpieces, here are 10 facts surrounding Bellator 121:

FACT 1: Nearly a quarter of London Shootfighters export James Thompson’s 33 professional bouts -- three of his 19 wins and four of his 14 losses -- have ended in less than a minute.

FACT 2: Bellator Season 5 heavyweight tournament winner Eric Prindle has not recorded consecutive victories since winning seven in a row from July 26, 2008 to Oct. 29, 2011.

FACT 3: Undefeated light heavyweights James Austin Heidlage and Luiz Philipe Lins are a combined 15-0 with 13 finishes between them.

FACT 5: Rodney Wallace enjoyed a decorated football career as a running back at Catawba College in Salisbury, N.C., where he remains the school’s all-time leader in rushing yards (3,769), rushing attempts (769), rushing touchdowns (41) and 100-yard rushing games (12).

FACT 7: Excel Jiu-Jitsu’s Ray Sloan has compiled a perfect 6-0 mark, but the six men he has defeated hold a cumulative 11-41-1 record.