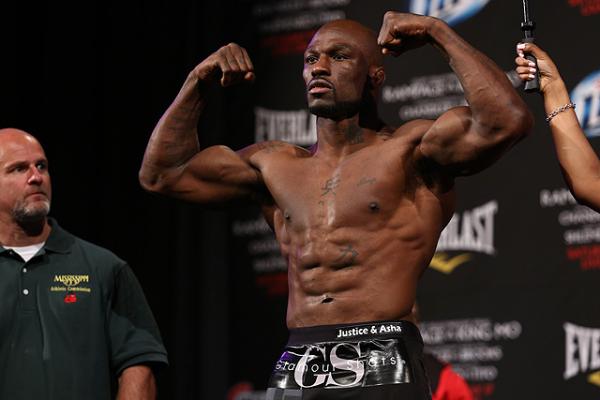 A little more than a week after agreeing to a long-term contract extension with the promotion, Lawal will take on Ultimate Fighting Championship, World Series of Fighting and Cage Fury Fighting Championships alum Dustin Jacoby in a light heavyweight showcase at Bellator 123 on Friday at the Mohegan Sun Arena in Uncasville, Conn.

Lawal last appeared at Bellator 120 in May, when he dropped a unanimous decision to Quinton Jackson at the Landers Center in Southaven, Miss. An American Top Team representative, “King Mo” was a three-time NCAA All-American wrestler, earning the honors twice the University of Central Oklahoma and once more at Oklahoma State University. Lawal owns a 4-3 mark inside Bellator, with two of those losses resulting from encounters with reigning 205-pound titleholder Emanuel Newton.

Jacoby, a replacement for the injured Marcus Sursa, will enter his company debut on the strength of a two-fight winning streak. The 26-year-old Finney’s Hit Squad export last competed under the Titan Fighting Championship banner on Aug. 22, when he stopped Lucas Lopes on a first-round head kick and follow-up punches at the Crown Coliseum in Fayetteville, N.C. Jacoby has secured nine of his 10 career victories by knockout, technical knockout or submission, eight of them inside one round.

With the Lawal-Jacoby clash as a lure, here are 10 facts surrounding Bellator 123:

FACT 1: Pat Curran is one of four men to have held the Bellator featherweight championship. Joe Soto, Joe Warren and Daniel Straus are the others.

FACT 2: Patricio Freire was 17 years old when he made his professional mixed martial arts debut on March 9, 2004 in his native Brazil.

FACT 4: Strikeforce veteran Lavar Johnson has gone the distance once in his 27-fight career.

FACT 5: Cheick Kongo has spent more time (2:43:26) competing inside the Ultimate Fighting Championship’s famed Octagon than any other heavyweight in history and his 1,025 total strikes landed ranks second to Cain Velasquez (1,257), according to FightMetric data.

FACT 6: Ten of heavyweight Josh Burns’ 15 career bouts -- five of his eight wins and five of his seven defeats -- have ended inside one round.

FACT 8: When Tamdan McCrory steps into the cage to face Brennan Ward, a staggering 1,854 days will have passed since his most recent appearance -- a unanimous decision loss to John Howard at UFC 101.

FACT 10: Mike Wessel played nose tackle for the University of St. Francis football team in Fort Wayne, Ind., where he led the team in sacks in 2000 and tackles for loss in 2000 and 2001.