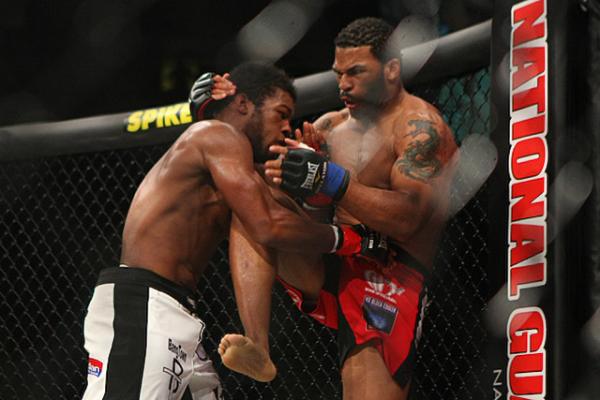 
A propensity for high-velocity, turn-on-a-dime violence has made Brian Rogers one of Bellator MMA’s must-see performers since entered the promotion in September 2011. Spectacular knockouts on Victor O'Donnell, Vitor Vianna and Adrian Miles have ensued.

Rogers will return to the cage for the second time in four months at Bellator 125 on Friday, as he faces the once-beaten Rafael Carvalho at the Save Mart Center in Fresno, Calif. Now 30, “The Professional Predator” has lost three of his past five bouts and will aim to turn the negative tide against a short-notice replacement.

A participant in Bellator’s Season 5, Season 6, Season 8 and Season 9 middleweight tournaments, Rogers has compiled a 4-4 record within the promotion. He last appeared at Bellator 119 in May, when he struck down the aforementioned Miles with a flying knee at the Casino Rama in Rama, Ontario. Rogers played college football for Walsh University in North Canton, Ohio, where he was a three-year starter and four-year letterman as an inside linebacker. His 320 career tackles still rank second on the school’s all-time list.

Carvalho, who replaced the injured Brett Cooper on short notice, will enter his organizational debut on the strength of a nine-fight winning streak. The 28-year-old last competed in May, when he put away Mauri Roque with a first-round knee to the body and follow-up punches at a Talent MMA Circuit event in his native Brazil. Carvalho has delivered eight of his nine professional victories by knockout or technical knockout, six of them inside two rounds.

With the Rogers-Carvalho clash as a lure, here are 10 facts surrounding Bellator 123:

FACT 2: Between mixed martial arts and kickboxing, Suriname-born Dutch striker Melvin Manhoef has totaled 65 wins, 53 of them by KO or TKO.

FACT 4: The three fighters to whom England’s Martin Stapleton has lost -- Derek Campos, Saad Awad and Paul Sass -- own a cumulative 44-12 record.

FACT 7: Jesse Juarez was a two-time NAIA All-American wrestler at Montana State University-Northern, where he won a national championship at 184 pounds in 2005.

FACT 9: Dethrone Base Camp’s Chris Honeycutt was 154-10 during his high school wrestling career before moving on to Edinboro University, where he twice earned NCAA All-America honors.

FACT 10: Over a career that spans nine years, Sergio Cortez has never won or lost more than three fights in a row.