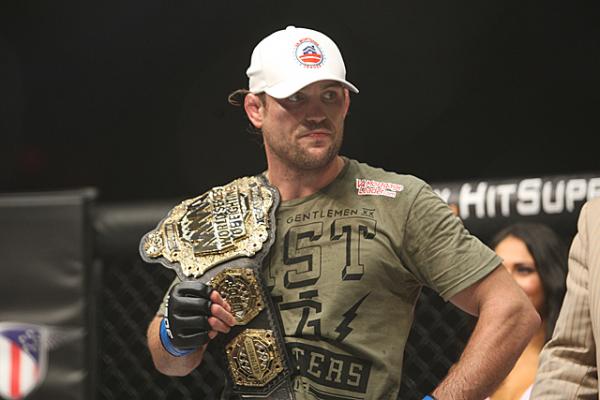 
Steve Carl can now take his turn as the hunted.

The Hard Drive MMA representative will defend the World Series of Fighting welterweight championship against Brazilian leg lock enthusiast Rousimar Palhares in the WSOF 9 main event on Saturday at the Hard Rock Hotel and Casino in Las Vegas. The two headliners have combined for 28 submissions in 36 victories between them.

Carl has submitted his last seven opponents, six of them via choke. The 29-year-old Iowan last appeared at WSOF 6 in October, when he rendered Josh Burkman unconscious with a fourth-round triangle choke and captured the inaugural World Series of Fighting welterweight title. Carl has compiled a perfect 3-0 record since arriving in the WSOF in November 2012.

Palhares’ in-cage antics have made him one of MMA’s more controversial figures. “Toquinho” was released by the Ultimate Fighting Championship for failing to release a heel hook following a Mike Pierce tapout at UFC Fight Night 29 in October. It was the third time the 34-year-old Team Nogueira powerhouse had run afoul of UFC brass. Palhares was suspended in 2010 after an almost identical incident against Tomasz Drwal and again in 2012, when he was flagged for elevated testosterone levels in wake of his knockout loss to Hector Lombard.

With the Carl-Palhares welterweight title match on the marquee, here are 10 facts surrounding WSOF 9:

FACT 2: Josh Rettinghouse, 24, has already competed in six organizations during his 12-fight career. They are the World Series of Fighting, CageSport, Northwest Fighting, King of the Cage, Spokane Showdown and Intense Cage Fighting.

FACT 4: Japanese judoka Yushin Okami has not fought outside of the UFC since June 11, 2006 -- a span of seven years, nine months and 18 days.

FACT 5: Svetlozar Savov hails from Zlataritsa, Bulgaria, a small town of less than 3,000 people that rests some 6,500 miles away from Las Vegas.

FACT 6: No fighter on the WSOF 9 roster has more experience than John Gunderson, who has fought 52 times since he debuted in August 2002.

FACT 7: “The Ultimate Fighter” Season 2 graduate Josh Burkman was released by the UFC following consecutive losses to Mike Swick, Dustin Hazelett and Pete Sell in 2008. “The People’s Warrior” has compiled an 8-2 record in 10 fights since.

FACT 8: The Arena’s Shane Kruchten was wounded by the blast of an improvised explosive device while serving as a Marine in Fallujah, Iraq, in 2004. He will enter his WSOF debut against Mike Corey on an 11-fight winning streak. Corey is also a Marine.

FACT 10: Hawaiian brothers Bryson Hansen and Brenson Hansen have never before competed on the same card.