The last time Fedor Emelianenko fought a former UFC heavyweight champion, he beat him in 36 seconds.

This time it took three minutes, but the win was still decisive.

Emelianenko knocked out Andrei Arlovski on Saturday at Affliction and M-1 Global’s “Day of Reckoning” in Anaheim, Calif.

Arlovski had some success early. He was beating Emelianenko to the punch and also landing leg kicks. In fact, a stiff front kick backed the WAMMA heavyweight champion into the corner and Arlovski, thinking perhaps he had him hurt, began to launch a flying knee.

Right then Emelianenko countered with a right hand that stopped Arlovski in midair and left him lying face-first on the canvas. The official time was 3:14.

Emelianenko’s next opponent is expected to be Josh Barnett, who dominated Gilbert Yvel on the ground to win their heavyweight bout.

Yvel looked dangerous on the feet, but he couldn’t stay there. Barnett took him down and moved into the mount in all three rounds. 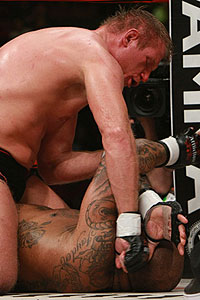 Dave Mandel/Sherdog.com
Josh Barnett dominated
a tough Gilbert Yvel.
Late in the first, it seemed as if Barnett’s punches and elbows from the top would force a stoppage. Yvel was battered but survived, then survived Barnett’s mount again in the second. In the third, Barnett’s superior positioning and strikes finally forced Yvel to quit at 3:05.

“End of the first and the takedown in the third and the finishing ground-and-pound were about the only good things I did in the fight,” said Barnett, now 24-5, who was unhappy with his performance. “I’m sorry about it, you guys. … I gotta step it up next time.”

Vitor Belfort scored his biggest win in years by knocking out Matt Lindland in 37 seconds.

Nicknamed “The Phenom” for the speed and punching power he demonstrated as a 19-year-old heavyweight in the UFC, Belfort, now 31 and rebuilt as a middleweight, floored Lindland with a left hand to his chin and finished him with follow-up strikes on the ground.

Lindland had led with a left hook that opened him up. Belfort was too quick and too accurate with his own left, and after his punches landed it took Lindland some time to regain consciousness. Eventually, however, the Olympic silver medalist in Greco Roman wrestling removed a neck brace that had been placed on him and he walked out on his own power.

“I came to compete and to take over this weight division,” said Belfort, who improved to 18-8. “I’m too fast, I think. … The speed and the accuracy, I kind find the spot right away. Matt is a predictable fighter. I caught him and I just kept going. Speed is the key. You can’t beat speed.”

Renato "Babalu" Sobral used a D'Arce choke to submit Rameau Thierry Sokoudjou 2:36 into the second round of their light heavyweight bout.

Sobral had looked to ground the fight throughout the opening period. Sokoudjou stopped the attempts and won the round on points, but he gave up a pivotal double-leg takedown in the second. On the mat, the fight belonged to Sobral. The Brazilian postured up and punched, which helped him pass to half guard. 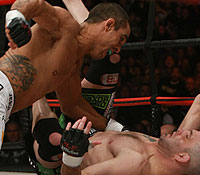 Dave Mandel/Sherdog.com
Vitor Belfort knocked
Matt Lindland stiff.
Sokoudjou had little defense from his back. He tried to stand to escape Sobral’s strikes, but that’s when Sobral locked on the choke for the finish.

Buentello cut and swelled his eye early with a stiff jab. Later that jab set up straight rights and left hooks as Buentello, who has fought for more than a decade, found his rhythm against his 5-2 opponent.

Sidelnikov showed a sturdy chin throughout, but his offense was minimal while Buentello picked him apart. A ringside doctor called the fight at 4:18 of the third.

Dan Lauzon weathered an early storm from Bobby Green, a last-minute replacement for Chris Horodecki, to win an awkward lightweight bout. Green attacked his 20-year-old opponent with knees, kicks, punches and even a suplex, but the fight was also stopped three times in the first round for his low blows. Lauzon recovered to submit Green with a rear-naked choke at 4:55.

Note: This article was updated to change Babalu's finish from an anaconda choke to a D'Arce choke.