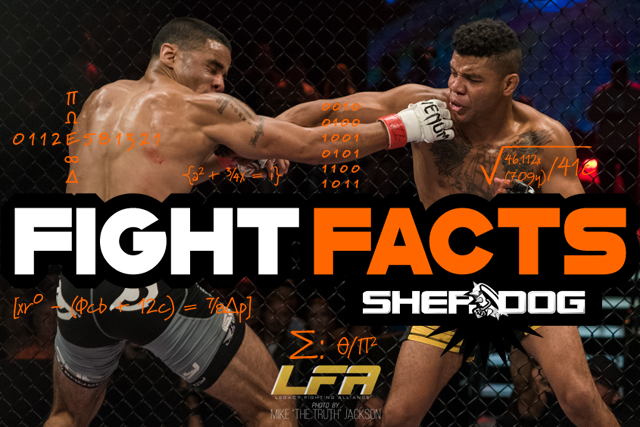 Returning to The Bomb Factory in Dallas -- the arena in which Legacy Fighting Alliance held its first event -- the LFA brought some fistic fireworks to AXS TV. The event featured two of the winningest athletes in promotional history pitted against one another, a fighter who cannot be stopped in his home state and a longtime LFA competitor finally notching his first win.

AND ONLY ONE WILL SURVIVE, I WONDER WHO IT WILL BE: The main event of LFA 47 featured the winningest fighter in the promotion, Damon Jackson, against its winningest featherweight, Nate Jennerman. Their meeting brought a combined 9 wins inside the promotion’s cage, the most for any bout in organizational history.

LUCKY SEVEN: In his seventh bout with the LFA, Jackson finally won LFA gold. He has the most appearances inside the promotion, holds the most wins (6), and tied Jennerman for the most wins at featherweight (4).

DOING MORE THAN LEECHING: In 16 career victories, Jackson has finished his opponent in 15 of them, following his second-round knockout of Jennerman. “The Leech” scored his lone decision victory over fellow LFA 47 competitor Levi Mowles at Legacy FC 61 in 2016.

DON’T MESS WITH TEXAS: In his fifth straight fight in Dallas with the LFA, and 10th in Texas overall, Jackson, a proud Texan, has never lost when fighting in front of his home crowd.

STUCK TOGETHER, TORN APART: Despite Kevin Aguilar unifying the LFA featherweight belts less than three months ago, the LFA created an interim featherweight strap, as Aguilar has since competed in Dana White’s Tuesday Night Contender Series. Instead of vacating his belt, it is on hold, and if Aguilar does leave the promotion, Jackson may be upgraded to the undisputed featherweight champion.

TURNED THE OTHER CHEEK: Tapping out in the second round due to a rear-naked choke from Mowles, Charles Cheeks III became the sixth fighter in LFA history to lose multiple times by submission. Cameron Miller, Damien Hill, Darrick Minner, Linsey Williams and Sidney Ben Simons all previously lost twice by submission under the promotion’s banner.

MADE THAT LOOK RAMEASY: Putting William Macario to sleep with a guillotine choke in the second round, Ramiz Brahimaj has now recorded all seven of his career victories by submission.

WHO SAW THAT COMING? : Springing a second-round knockout upset over Ultimate Fighting Championship vet and massive -495 favorite Sean Spencer, the +360 underdog Bilal Williams recorded his first win with the LFA in four bouts.

RIGHTING THE SHIP: Williams started his LFA career off with three consecutive losses, but with his victory over Spencer, he became the first fighter in the promotion’s history to win after losing three straight.

YOUR JOURNEY HAS JUST BEGUN: The bout between Valerie Soto and Cristina Crist at women’s strawweight marked the fourth fight in LFA history to feature two women each making their pro debut.

SHOT OUT OF A CANNON: In the 15 previous fights between two competitors making their pro debuts under the LFA banner, the debutants had only gone to the scorecards twice. The debut of Soto and Crist involved the judges for just the third time in those 16 fights.

NEVER SAY NEVER AGAIN: Coming into LFA 47, Jennerman had never been knocked out (15 fights), Brahimaj had never won a fight that got out of the first round (6 fights), and Devin Miller had never gone to the scorecards in his MMA career (3 pro, 6 amateur bouts).

Jay Pettry is an attorney and a statistician. Writing about MMA since he started studying the “Eminem Curse” in 2012, and writing for Vice Sports and Combat Docket along the way, he put together many fight result and entrance music databases to better study the sport. You can find him on twitter at @jaypettry.
Related Articles
Latest News
+ VIEW MORE