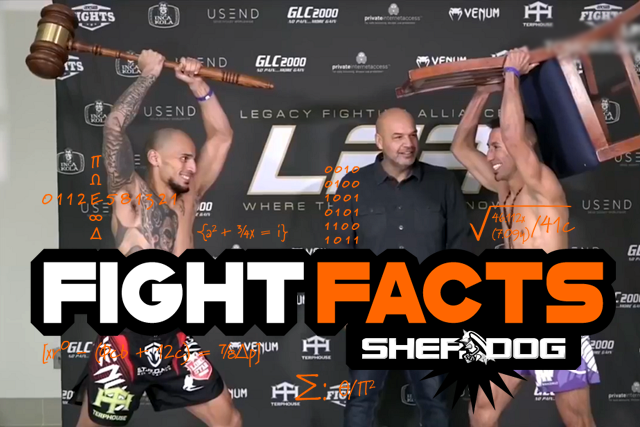 Putting on a barnburner of a card in Texas, LFA 52 gave the crowd much to cheer for with seven stoppages in nine fights and equally thrilling decisions. The event became the first to showcase multiple knockouts from knees, and featured the most women’s bouts on a Legacy Fighting Alliance card as well as two of the three fastest finishes in the promotion’s female divisions.

DEEP IN THE HEART OF TEXAS: Hosting LFA 52 in Belton, Texas, the LFA has now held events in five different cities in the Lone Star State, more than any other.

KNEED A BREAK? LFA 52 became the first event in promotional history to feature two stoppages from knees, after Vernon Lewis and Hailey Cowan both scored knockouts using their knees.

TAP THREE TIMES: This event joined LFA 41 as the only other event in promotional history to end with three straight submissions; Chris Gutierrez, Jimmy Flick and Punahele Soriano all forced their opponents to tap.

CHOKE IT TO ME: With three rear-naked chokes taking place throughout the night, LFA 52 tied three other events (LFAs 16, 28 and 33) for the third most RNCs at a single event. Those four events trail LFAs 13 and 40, with four each.

LIGHTER THAN AIR: With a whopping seven of the nine bouts on this card taking place at 135 pounds or below, this event trumped the previous record holder of LFA 40 which had five bouts at bantamweight or lighter.

WE CAN DO IT! Holding three bouts in women’s divisions throughout the night, LFA 53 had the most fights between females of any event it has held to date. Only two events, LFA 14 and 23, previously had more than one women’s fight on their respective cards.

TIME AFTER TIME: Cowan and Desiree Yanez both picked up first-round stoppages at this event, and in doing so, they earned the second and third fastest finishes in LFA women’s divisional history, respectively. Cowan scored a knockout of Sha Whittington in 69 seconds, and Yanez flattened Fatima Mallett in 131 seconds. New Ultimate Fighting Championship recruit Maycee Barber holds the record with a 31 second rear-naked choke of Kaila Thompson at LFA 33.

NO BETTER TIME TO LEARN: Gutierrez recorded his first career victory by submission, when he tapped Ray Rodriguez in the first round with a rear-naked choke.

ON THE UP AND UP: Prior to his win over C.J. Hamilton, Flick had alternated wins and losses in his last nine fights dating back to 2012. The win gave Flick his first win streak since he started his career by winning his first six.

LET ME TELL YOU A STORY: Soriano improved his undefeated record to 5-0 with a first round rear-naked choke of Jhonoven Pati. “Story Time” has finished all five of his opponents in the first round, with this three minute and 36 second bout the longest in his professional career.

TOOK THE SCENIC ROUTE: Needing a third round to dispatch Jeremy Hardy, Vernon Lewis earned the second latest stoppage in LFA heavyweight history. Lewis’s knockout win at 51 seconds of round three trails only Richard Odoms’s fifth-round kimura of Jared Vanderaa at LFA 15 in 2017.

PIONEER WOMAN : With five of her six career bouts taking place inside the LFA cage, Itzel Esquivel now holds the most appearances for a female in LFA history, and is tied for the fifth most fights for the promotion with four others.

OUCH: Dropping her fifth career bout, Whittington has not yet won a fight, and she has been stopped in the first round in all five.

NEVER SAY NEVER AGAIN: Coming into LFA 52, the LFA had never travelled to Belton, Texas, Esquivel had never fought beyond the second round (5 fights) and Rodriguez had never lost a fight in the first two rounds (17 fights).