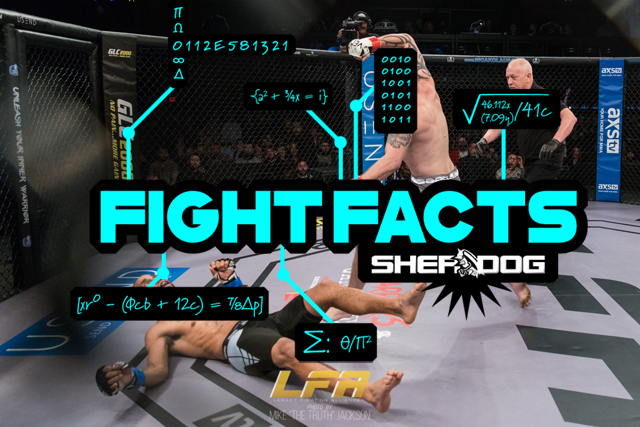 The Legacy Fighting Alliance on Friday touched down in Dallas for the seventh time -- Prior Lake, Minnesota, has also been the stage for seven LFA events, good for most all-time -- and brought a card to The Bomb Factory that featured two championship fights. LFA 55 gave rise to the promotion’s first women’s bantamweight bout, one of the quickest knockouts in company history and a woman who channeled her inner Holly Holm.

THREE AND 0: Three fighters came in to LFA 55 undefeated -- Miles Johns, Austin Lingo and Victor Altamirano -- and all three left with their perfect records intact.

DOUBLE YOUR FUN: With two belts on the line, LFA 55 became the sixth Legacy Fighting Alliance event to put multiple titles up for grabs.

CLOSE SHAVES: Prior to LFA 55, only one championship fight had ever been decided by a split decision, as James Nakashima edged Derrick Krantz at LFA 23. At this event, that happened twice.

JUDGES WORKING OVERTIME: With the final four fights of the night all decisions, this event became the first in LFA history to end with four fights going the distance. It was also the seventh time in company history that four consecutive bouts have reached the scorecards.

ONWARD TO VICTORY: Johns became the third LFA bantamweight champion when he beat Adrian Yanez by split decision. He finds himself in good company, as the previous two champions -- Leandro Higo and Ricky Simon -- signed with Bellator MMA and the Ultimate Fighting Championship, respectively, after winning their belts.

NO BETTER TIME TO MAKE A FIRST IMPRESSION: The 135-pound championship bout between Sarah Alpar and Joselyne Edwards Laboriel was the first fight in LFA history to take place in the women’s bantamweight division.

DIPPING THEIR TOES IN THE WATER: The bout between Alpar and Edwards was only the third bout scheduled above women’s flyweight, following Alexa Conners’s 140-pound catchweight affair with Calie Cutler at LFA 8 and Courtney King’s featherweight tilt with Colbey Northcutt at LFA 14.

HE FOUND THE MYSTERY WORD: By starching Aaron Webb in 13 seconds, Lingo picked up the fourth-fastest win in LFA history.

SAY NO TO DARK MATCHES: James Wallace tapped Sean Holden in the first round with a triangle armbar on the untelevised prelims and in doing so earned himself the fourth submission of that kind in LFA history.

I’M GOING TO PICK A FIGHT: After submitting Holden, all eight of Wallace’s career wins have come by stoppage within two rounds. His two career losses came by decision.

Holly Holm SPECIAL: Hailey Cowan flattened Jessica Sotack with a head kick in the second round, scoring the 10th head kick knockout in LFA history and only the third by a female fighter.

IF A TREE FALLS IN THE FOREST …: On an unaired postliminary bout, Altamirano won with a brabo choke -- the fourth in promotional history.