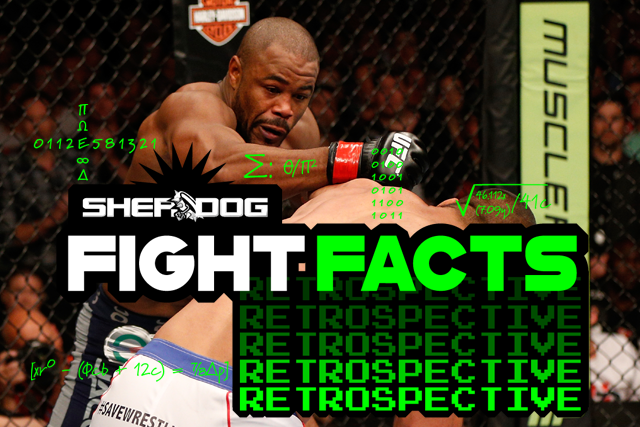 
Fight Facts Retrospective is a branch of the Fight Facts series that chronicles the accomplishments and achievements of legendary fighters.

Owner of a lengthy and impressive legacy with the Ultimate Fighting Championship, Rashad Evans conquered the second season of “The Ultimate Fighter” despite being at a massive size disadvantage against his opponents. The onetime 205-pound champion accomplished the rare feat of winning in both the heavyweight and light heavyweight divisions, and his future with the UFC seems secure, as he serves as a popular analyst on a myriad of UFC telecasts. Evans on Monday announced his retirement from competition.

MADE IN AMERICA: In 28 career fights, Evans never fought outside of North America. He fought once in Mexico and once in Canada, with his remaining bouts taking place inside the United States. Although never afforded the opportunity to fight in his home state of New York, he fought once each in surrounding states Pennsylvania and New Jersey, prevailing in both.

PAY TO PLAY: Only 15 events in UFC history have reportedly sold at least one million pay-per-view buys, and Evans won in the main event of two of those cards: UFC 92 and 114. He was the second fighter in UFC history to headline two cards that sold over one million PPV buys -- a feat first accomplished by Brock Lesnar at UFC 91 and 100.

A VERITABLE WHO’S WHO: Facing some incredibly difficult competition in his career, Evans competed against 10 former or future titleholders from the UFC, Pride Fighting Championships and Bellator MMA. He defeated seven of them.

WRESTLER’S WRESTLER: Although he started his MMA career with victory via anaconda choke, Evans did not attempt a single submission in his entire UFC career. Evans never lost by submission, either, and his opponents only attempted a combined 10 submissions against him.

MOUNTAIN CLIMBER: In his first Octagon appearance, Evans gave up eight inches in height and 26 pounds to opponent Brad Imes and still managed to win a split decision to take “The Ultimate Fighter 2” crown. It was Evans’ only fight at heavyweight, as he promptly dropped to light heavyweight, where he spent the majority of his career.

TRIPLE TITLE THREAT: Appearing in three title fights throughout his career, he won his first but lost the next two. Evans was the second fighter in “The Ultimate Fighter” history to ever compete in three UFC title fights; Kenny Florian was the first. Only four fighters from “The Ultimate Fighter” have ever fought in three title bouts: Florian, Evans, T.J. Dillashaw and Michael Bisping. Of those four, only Evans and Bisping won their respective seasons on the reality series.

GOOD COACH: On Season 10 of “The Ultimate Fighter,” Evans served as a coach of the heavyweights against rival Quinton Jackson. Team Rashad fighters won seven of their eight preliminary bouts, and only one fighter from Team Rampage made it into the semifinals before being eliminated. Evans’ fifth pick, Roy Nelson, ended up winning the season by knocking out his No. 2 pick, Brendan Schaub, at “The Ultimate Fighter 10” Finale.

EXTRA CASH: Over his career, Evans won two “Knockout of the Night” bonuses -- one for becoming the first fighter in history to cleanly knock out Chuck Liddell, the other for his highlight-reel head kick knockout of Sean Salmon. Evans also won two “Fight of the Night” bonuses, emerging as the winner in all four of the bouts in which he was awarded bonus money.

SPLIT THE BABY: There have been 29 split decisions rendered in modern UFC light heavyweight history, and Evans is the only fighter in the weight class to ever win three of them. Victorious in four split decisions overall, Evans holds the second-most wins by split decision, along with Benson Henderson and John Howard. Henderson, Howard and Evans all trail Gleison Tibau with five.

DON’T DRAW ANY CONCLUSIONS: Evans’ first battle with Tito Ortiz at UFC 73 remains the only light heavyweight bout in UFC history to be declared a draw. Ortiz was deducted one point by referee John McCarthy for grabbing the cage in the second round.

ALL GOOD THINGS: Evans lost his light heavyweight title in his first defense when he was dramatically knocked out by Lyoto Machida. In doing so, his reign was cut short at 147 days -- Dec. 27, 2008 to May 23, 2009. It remains the shortest reign of any light heavyweight champion in UFC history.

TOUGH STRETCH: Evans stopped Chael Sonnen in the first round of their encounter at UFC 167 in 2013. He did not win again, dropping five straight fights, with his final appearance coming on June 9. Evans started his UFC career on a five-fight winning streak and ended it on a five-fight losing streak.

’SHAD SONGS: Throughout his UFC career, Evans almost never chose the same walkout song for back-to-back appearances. In fact, it only happened once: at UFC 167 and then at UFC 192, where he walked out to “Victory” by Puff Daddy featuring Notorious B.I.G. and Busta Rhymes. He made the walk to the Octagon accompanied by at least 14 different songs throughout his UFC career, ranging from David Bowie’s “Fame” to Mobb Deep’s “Shook Ones (Part II).” He never used the same song more than three recorded times.

FUTURE IN TELEVISION: Once appearing on the TV show “Deadliest Warrior,” Evans demonstrated the lethality of weapons and techniques from Alexander the Great. Evans is a staple of pre- and post-fight analysis shows for the UFC and is often featured in other televised UFC content, as well.