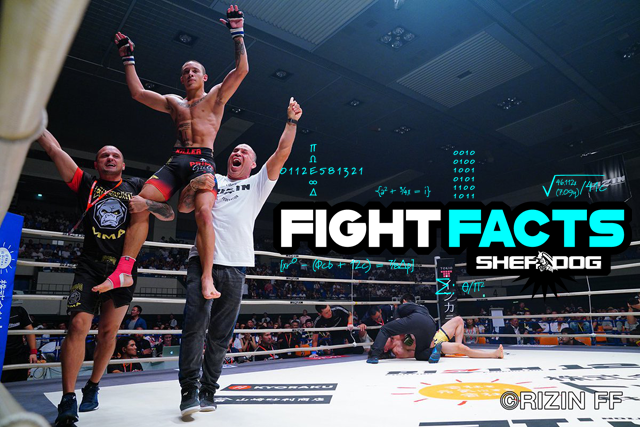 With its third show of 2018 in the books, Rizin Fighting Federation is well on its way to holding the most events in a calendar year in its history. Rizin 12 on Sunday brought terrific mixed martial arts and kickboxing action to Aichi Prefectural Gymnasium in Nagoya, Japan. The card featured the fantastic promotional debut of a Pride Fighting Championships legend’s protégé, the first team of brothers to record wins in Rizin and a historic Von Flue choke.

LIKE A YOUNG ‘AXE MURDERER’: A disciple of the great Wanderlei Silva, Luiz Gustavo Felix dos Santos remained undefeated and moved to 9-0 with his second-round knockout of Yusuke Yachi. Dos Santos has finished all nine of his opponents inside two rounds.

SUNRIZE, SUNSET: Before being knocked out by dos Santos, Yachi was one of the four fighters -- Kyoji Horiguchi, Gabi Garcia and Mirko Filipovic were the others -- to compete for Rizin at least five times and go unbeaten.

SLEEP NOW IN THE FIRE: When he put Ryuichiro Sumimura to sleep with an arm-triangle choke with one second to go in the first round, Kiichi Kunimoto became the fourth fighter in Rizin history to win by technical submission. Kunimoto also scored the first stoppage with one second left in a round inside the promotion.

SOLID NAMESAKE: “Strasser” Kunimoto now boasts 10 submissions among his 20 career victories. He has tapped four different opponents with arm-triangle chokes, having utilized the maneuver more than any other.

A NEW HORIZON: The promotion held the first women’s featherweight bout in its history, as Kaitlin Young took on Reina Miura. The organization has held 38 bouts in virtually every other women’s weight class, ranging from atomweight to heavyweight, but has still not staged one for women’s bantamweights.

HEADHUNTED: By knocking out Hatsu Hioki with a first-round head kick and follow-up punches, Mikuru Asakura became the fifth fighter in company history to knock out an opponent with a head kick.

HEY, HERMANO: Asakura, the younger brother of two-time Rizin winner Kai Asakura, made his successful Rizin debut with his knockout of Hioki. The Asakuras are the first brother tandem to both win inside the Rizin ring.

ANYTHING YOU CAN DO, I CAN DO BETTER: By forcing Angela Magana to tap to a Von Flue choke, Kanako Murata became the first female fighter from any of these major organizations to win with the maneuver: Ultimate Fighting Championship, World Extreme Cagefighting, Strikeforce, Pride, Bellator MMA, Invicta Fighting Championships, World Series of Fighting-Professional Fighters League and Rizin.

FLYING UNDER THE RADAR: Winning her fourth fight under the Rizin banner, Murata’s victory over Magana left her tied for the third with Garcia for most wins by a female fighter in the organization. They trail Rena Kubota and Kanna Asakura, who each hold six Rizin wins.

NEVER SAY NEVER AGAIN: Entering Rizin 12, Yachi had never lost in the Rizin ring (five fights), Sumimura had never been finished (19 fights) and no fighter in Rizin had ever been rendered unconscious from an arm-triangle choke (Sumimura).

YOU GOT LUCKY: Walking out to the ring accompanied by traditionally unsuccessful walkout song “Lose Yourself” by Eminem, Yuki Motoya still managed to win by submission. When UFC fighters have been accompanied by that track, they typically fare very poorly, going a recorded 5-14 for a winning percentage of .263.

Jay Pettry is an attorney and a statistician. Writing about MMA since he started studying the “Eminem Curse” in 2012, and writing for Vice Sports and Combat Docket along the way, he put together many fight result and entrance music databases to better study the sport. You can find him on twitter at @jaypettry.