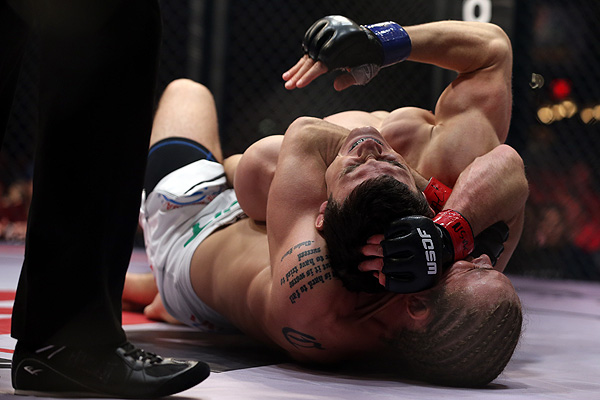 Steve Carl has submitted all three of his World Series of Fighting opponents. | Photo: Dave Mandel/Sherdog.com


Franklin Delano Roosevelt once famously said, “The only thing we have to fear is fear itself.” FDR might have thought twice about that line if he was about to step into the cage with Rousimar Palhares.

Steve Carl will do just that when he defends the World Series of Fighting welterweight title for the first time against Palhares in the WSOF 9 main event on Saturday at the Hard Rock Hotel and Casino in Las Vegas, and the champion is not afraid. If we were discussing the Carl of pre-Sept. 10, 2011, this would be a different story. Something significant changed for Carl that day, when he suffered the third defeat of his career in a unanimous decision to Douglas Lima at Bellator 49. He has not lost since.

Carl admits he was filled with fear at the time.

“Mentally, I wasn’t at the level I was competing at,” he said. “My first 10 or so fights, I was getting in there [and getting] out of breath because I was adrenaline dumping in the back because I was so terrified I was going to have to fight. Before the bell, I would ask myself every time, ‘How did I get here?’”

Eventually, it started to catch up with Carl. Despite the mental pressure he was putting on himself, he was 12-1 heading into his first Bellator MMA appearance, where he won a split decision over Brett Cooper in the Season 2 welterweight tournament quarterfinals. Then he lost a month later via first-round submission to Dan Hornbuckle in the semis. He came back at Bellator 26 with a win over Tyler Stinson but broke his thumb, forcing a 13-month hiatus. His first fight back was the defeat to Lima. Carl learned something invaluable that day.

“Really, it just took that last loss to Douglas Lima to make me realize … I didn’t have the right mental attitude,” he said. “In my mind, he was the better fighter and I couldn’t beat him. Then I went in there, and not giving 100 percent, I was able to compete with him and it clicked in my head that if I don’t give myself a shot, there is no reason to continue doing this. If I’m going to continue doing this, I have to go in headfirst and I have to fight. I have to go after it, and that’s what I’ve been doing since.” 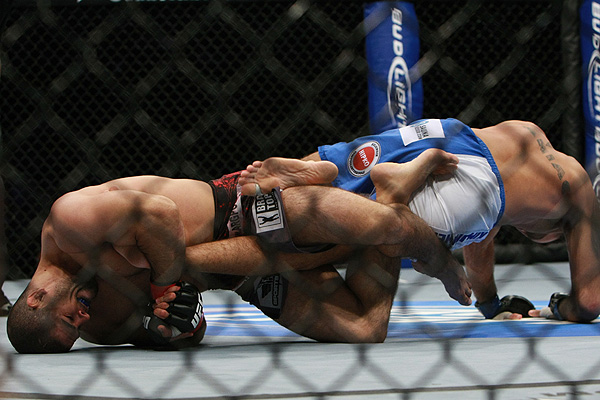 Photo: D. Mandel/Sherdog.com
Palhares is known for leg locks.
More specifically, what Carl has been doing since is winning. He has won seven fights in a row, the first six of which all came via submission in the first round. The seventh was an epic battle against Josh Burkman at WSOF on Oct. 26, as Carl won the promotion’s inaugural welterweight championship with a triangle choke submission in the fourth round. Burkman was without question the toughest challenge to Carl’s newfound mental toughness. He injured his back before the fight and was unable to train properly for weeks leading up to the event.

Recent Palhares opponents have found it equally difficult to quit, even when they have tried. His skill at submissions -- especially the heel hook -- is surpassed only by his penchant for refusing to let them go until well after the fight has otherwise ended. The most recent example of this behavior came at UFC Fight Night 29 in October, when Palhares caught Mike Pierce in a heel hook just 31 seconds into round one and then refused to let it go despite Pierce’s repeated attempts to tap out and referee Keith Peterson’s diving in to help. Following the bout, the Ultimate Fighting Championship released Palhares due to “unsportsmanlike conduct.” It was not the first time “Toquinho” had been disciplined for such actions. In 2010, he was suspended for 90 days for failure to let go of a heel hook against Tomasz Drwal at UFC 111, and in 2011, he caused controversy for continuing to hold a submission against David Avellan after their match was paused at the Abu Dhabi Combat Club Submission Wrestling World Championships.

It is easy to see why an upcoming bout with Palhares could rattle one’s nerves. Carl can understand it, too, but he is not buying into it.

“There’s a reason nobody wants to fight this guy,” he said. “It’s because he’s dirty, but he’s also really, really good, so that makes him extremely scary; but like I said, worrying isn’t going to get me anywhere. If it comes to a situation where I’m in a submission and Palhares doesn’t let it go, the fight’s over already, so there’s no reason to worry about it at that point.”

Carl considers his fight career to be a “path of self-exploration,” and if there has ever been a test of the positivity-centric creed that guides him down that path, it is now. So far, he has not let the nerves get the best of him.

“I’m thinking about winning,” he said, “not what happens if I lose.”