“Right now I’m not thinking about anything else. My eye is right on him,” Gamburyan said recently on the Sherdog Radio Network’s Savage Dog Show. “That’s the only guy I really want to fight right now. It doesn’t make sense to fight anybody else. Even if they offered me Nate Diaz, that wouldn’t make sense to me. The next fight should be Jose Aldo.”

Gamburyan, Sherdog’s No. 2-ranked featherweight behind Aldo, is expected to get the next crack at the Brazilian. He knows it will be a battle. Aldo is 17-1 overall and 7-0 in the WEC.

“I’m going to have a good game plan,” Gamburyan said. “I’ll talk to my coaches and train hard and train a smart way. It’s going to be a big, huge puzzle. That’s for sure. He’s a phenom. He’s a great fighter, a great athlete.” 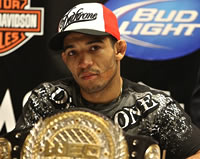 
If the match is made, Aldo will be a significant favorite. Of course, Brown was also a big favorite going into his April 24 matchup with Gamburyan, who didn’t appreciate the odds.

“To be honest with you, I was pretty mad and pretty upset that I was a big-time underdog,” Gamburyan said. “I don’t know why people were giving (Brown) too much credit. I understand that he was a former WEC champion. Mike Brown is tough as hell, but I don’t know, that was kind of sad (that Brown was) a five-to-one favorite.”

Gamburyan’s friends had a different view on the betting line. They loved it. They bet big on their boy and cashed in when Gamburyan connected with a right hook counter and finished Brown on the floor. Later, Brown told Sherdog’s Greg Savage it was the hardest he had ever been hit.

The upset win would have sent most fighters into celebration mode. Gamburyan went to the locker room, sat down and watched Aldo’s main event title defense against Urijah Faber from beginning to end.

Aldo dominated all five rounds, crippling Faber with leg kicks and easily evading the former 145-pound king’s attacks. It was the only time Aldo has gone the distance in the WEC. In many ways, though, the 25 minutes of punishment he dealt to Faber was even more impressive than prior performances.

“I know myself,” he said. “If anybody fights Jose Aldo, you can’t be scared of him. I look at it this way: Whoever fights Anderson Silva, if you go look at the tape, everybody is scared of him. They’re not going in there 120 miles per hour, 120 percent (confident) that they’re going to win the fight. Like I said, I’m not taking anything away from Mike Brown. He’s a great fighter, a great champion, but when I signed that contract to fight Mike Brown, I was like, ‘I’m going to beat Mike Brown.’ I don’t care that he’s Mike Brown. That’s the way that I look at it.”

Gamburyan said he wasn’t scared of Brown and he won’t be scared of Aldo either.

“That’s going to be a big thing,” Gamburyan said. “I won’t be scared, I promise you. When I walk into the cage, I’m going to look in his eyes and I’m going to say, ‘I’m going to take the belt from you.’”