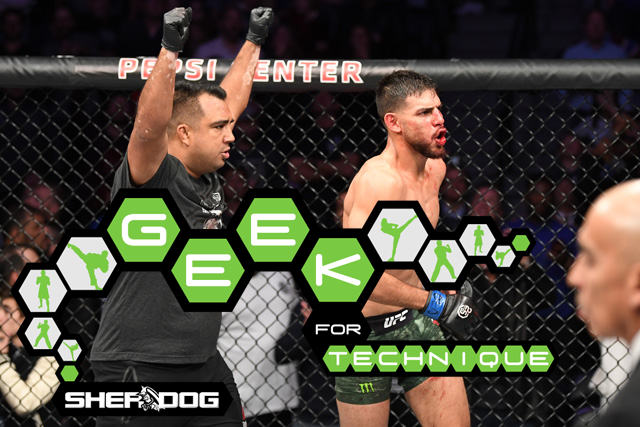 The Ultimate Fighting Championship’s 25th anniversary event may not have been the biggest show the company has ever staged, but it ended up being one of the most memorable fight cards in the sport’s brief history. From showcase fights for young prospects like Maycee Barber to the venerable Donald Cerrone breaking the organizational records for wins and finishes, UFC Fight Night 139 on Saturday in Denver truly had it all.

This installment of the Geek for Technique series shines the spotlight on the best techniques from the event.

Mark De La Rosa defeated Joby Sanchez by split decision in a back-and-forth battle at 135 pounds. Sanchez attempted to integrate his jab and leg kicks to dissuade De La Rosa from coming forward, but the latter’s relentless pressure ended up being too much for the Jackson-Wink MMA standout to handle. Sanchez looked flustered for much of the fight.

The UFC Fight Pass prelim headliner saw Eric Shelton control Joseph Morales for all three rounds and take home another split decision victory, bringing his UFC record to 2-3. Morales appeared to be winning the exchanges on the feet but had no answers for Shelton’s grappling: He was taken down seven times and found himself working off of his back for most of the fight.

The Fox Sports 1 undercard kicked off with Devonte Smith defeating Julian Erosa by knockout with a picture-perfect counter right straight. Erosa has always kept his hands by his waist and takes on a Dominic Cruz-like style of striking. The problem for Erosa is that he does not have anywhere near Cruz’s footwork and was unable to retreat quickly enough before eating a right hand. Smith knew Erosa kept his hands low, perfectly timed a leg kick and exploited his hands-low defense with a beautiful right straight.

Onetime Abu Dhabi Combat Club Submission Wrestling World Championships gold medalist Davi Ramos made quick work of “The Ultimate Fighter” alum John Gunther when he submitted him with a rear-naked choke just two minutes into the fight. This was supposed to be a showcase for Ramos, and he proved yet again that his grappling skills are world-class. When he decides a takedown, the fight is all but over.

UFC Fight Night 139 was filled with questionable judging and officiating, but Bobby Moffett and Chas Skelly drew the short end of the stick. Midway through the second round, Moffett locked up a brabo choke and the fight was stopped, despite the fact that there was neither a tapout nor any sign that Skelly was out cold. Referee Tim Mills eventually ruled it a technical submission -- he claimed he saw Skelly’s arm flop on replay -- and left fans confused. Perhaps a rematch is in order.

The Fox Sports 1 prelims were headlined by Ashley Yoder-Amanda Bobby Cooper, and the two put on an excellent fight. Cooper clearly outstruck Yoder, but the judges did not appear to give her leg kicks or body shots the credit they deserved. Yoder took home a split decision on the strength of her slight grappling advantage, despite the fact that Cooper landed more takedowns.

The main card opened with “The Ultimate Fighter 27” winner Michael Trizano defeating Luis Pena in the fourth split decision of the event. Pena was highly regarded entering the UFC, but his “Ultimate Fighter” castmate proved to be the superior all-around fighter. Trizano controlled the exchanges on the feet and on the ground, derailing the “Violent Bob Ross” hype train.

Barber made her UFC debut and lived up to her blue-chip billing, as she put away Hannah Cifers via second-round ground-and-pound. Barber has been preparing for a professional MMA career since she was in high school, and at just 20 years old, she is one of the most exciting and complete prospects in the woman’s strawweight division. Her striking was patient and tactical, and once the fight hit the ground, she fired off relentless ground-and-pound and used her size to bully Cifers everywhere the fight went.

On the heels of a 42-second knockout loss to Alexander Hernandez on March 3, Beneil Dariush returned to the Octagon and dominated Thiago Moises from start to finish. Although the result was one-sided in nature, Dariush likely saw the fight as a confidence-builder and and took no chances against Moises. As a result, he won a clear-cut but uneventful unanimous decision. While there may be beauty to Dariush’s brilliant tactical grappling, many fans anticipated a finish against an opponent with far less experience.

Former featherweight champion Germaine de Randamie moved back to more familiar haunts at 135 pounds and took a unanimous decision from Raquel Pennington. De Randamie controlled the fight with her jab and straight right, using her length to pick apart Pennington from the outside. What comes next for “The Iron Lady” remains to be seen, but some observers still hope to see her someday challenge current featherweight queen Cristiane Justino.

The co-main event paired Cerrone with consummate trash talker Mike Perry. The World Wrestling Entertainment-like buildup to this fight had fans clamoring to see them step inside the cage, especially with “Cowboy” on the verge of breaking UFC records for wins and finishes. Cerrone relied on his superior grappling to finish Perry with an armbar with just 15 seconds left in the first round.

The UFC Fight Night 139 headliner became an instant classic and an immediate frontrunner for “Fight of the Year,” as Yair Rodriguez stepped up on two weeks’ notice to lock horns with Chan Sung Jung. Rodriguez entered the cage as a slight favorite, but “The Korean Zombie” outstruck him across four-plus rounds before being victimized in arguably the craziest finish in UFC history.

With a win mere seconds away, Jung decided to oblige the fans and initiate a wild exchange. His failure to remain sound defensively proved costly. Jung crossed his feet and overextended on a left straight, at which point he was met with a no-look upward elbow some thought was accidental at first glance. It was straight out of a muay Thai fight from the 1980s. Whether or not it was a lucky shot, Rodriguez proved he belongs among the featherweight elite; and at just 26 years old, he has plenty of time to develop into a legitimate title contender at 145 pounds.