Germany has a longstanding martial arts tradition. The country has produced outstanding fighters like heavyweight world champion boxer Max Schmeling and Olympic judoka Udo Quellmalz, along wtih Olympic gold medalist and current Greco-Roman wrestling national team coach Maik Bullmann over the past 100 years. As a mixed martial arts nation, however, Deutschland has not made much of an impression.

With the UFC making its first appearance in Cologne this Saturday, Sherdog.com decided to shine some light on the little-known history of German MMA.

Erich Rahn was the son of a notable Berlin tradesman whose connections extended into China and Japan. When the imperial Japanese ambassador visited the Rahn family, little Erich played with the diplomat’s sons. They scrapped in a friendly manner and quickly finished the German, despite his being much bigger physically.

Katsukuma Higashi was for Rahn what Mitsuyo Maeda would become for Helio Gracie 15 years later. Around the turn of the century, the German teen-ager was so overwhelmed by the Hozan-ryu master’s techniques that he quit his day job to study jiu-jitsu fulltime. In 1906, he opened the first German jiu-jitsu school in Berlin.

Four years later, he became the main martial arts instructor for the Berlin police. Ultimately, he received a special teaching position at the German capital’s military academy. Following World War I, he toured Germany and challenged and defeated the country’s best boxers and wrestlers.

Thanks to his efforts, jiu-jitsu soon became a competition sport throughout Germany. At age 40, Rahn retired from active competition. Unfortunately, World War II and the resulting countrywide martial arts ban imposed by the Allies erased much of his legacy from the history books. Few martial arts experts, even in Germany, know of Rahn’s contribution to the sport.

From Fight Club to Free Fight

The beginnings of the present MMA scene in Germany are closely connected to Andreas Stockmann. A former close combat instructor for the German Democratic Republic, Stockmann fled the country after breaking with the system. After arriving in Western Germany, he participated and eventually promoted some of the first underground fight events in 1990.

“The early years were crazy,” the now 47-year-old says. “We were fighting bare-knuckle in old warehouses and abandoned factories. The only reason the police didn’t arrest all of us was because they liked the shows and attended them off-duty themselves.”

“We were looking to turn away from the grimy image the sport had over here,” Stockmann says. “That’s why the new millennium marked a totally new beginning for us, as we adopted the Unified Rules of MMA and started working more professionally.”

Since 2002, the FFA has held the Southern German MMA Championships on an annual basis. In 2005, regional championships in the west and north of the country were added, with the east following suit three years later. The popular amateur MMA series New Talents was installed, as well.

Peter Angerer remains one of just two German fighters who have been invited to take part in the prestigious Abu Dhabi Submission Fighting World Championships and the only German to have faced both an eventual K-1 champion, Semmy Schilt, and a three-time Brazilian jiu-jitsu world champion, Marcio Feitosa, in his career. 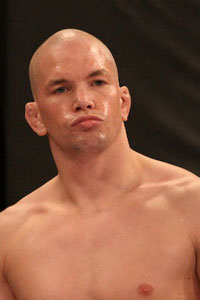 The list of notable German gladiators, though short, does not end there.

Chalid Arrab has emerged as perhaps the most successful example of German martial arts on the international circuit. The Golden Glory member fought twice in the Pride “Bushido” series and holds a knockout win against Fedor Emelianenko’s longtime main training partner, Roman Zentsov. “Die Faust” performed even better in K-1, where he won the World Grand Prix in Las Vegas in 2006.

Finally, Dennis Siver became the first German fighter to reach the UFC. The former national kickboxing champion has racked up a trio of respectable wins against Paul Jenkins, Said Khalilov and, most notably, “Judo” Jim Wallhead. He was signed by UFC parent company Zuffa LLC in early 2007, and although his record with the promotion stands at 2-3, he scored two spectacular knockouts against Naoyuki Kotani and Nate Mohr.

The “big six” German promotions reside exclusively in the eastern and western parts of the country. Although the north and the south are slowly following suit, they remain largely a no man’s land for MMA.

Based out of Minden in North Rhine Westfalia, the Outsider Cup stands as the country’s longest-running newcomer show. Fighters like Siver, Nordin Asrih and Andreas Kraniotakes have passed through its ranks.

Darmstadt serves as the base for the Tempel Fight School and its popular event series. The promotion traditionally puts on both MMA and kickboxing bouts and has enjoyed regular appearances from the likes of Martin Zawada, Daniel Weichel and Dawid Bazaik.

Meanwhile, Fight Club Berlin, in the nation’s capital, has become notorious for the rundown charm of its traditional venue -- the Kesselhaus at the Kulturbrauerei. Steve Mensing and Tomasz Drwal have served as the promotion’s major stars throughout the years. FCB also works together closely with outstanding Polish stable Berserker’s Team.

Last but definitely not least, the Free Fight Championship represents central Germany out of Leipzig. The promotion, run by heavyweight turned promoter Marko ZschÃ¶rner, traditionally attracts the biggest crowds and has produced some top prospects in Peter Sobotta, Sebastian Kliesch and Lars Rooch.

The German MMA landscape certainly appears to be changing.

“Much has changed in the past 24 months,” Willy Steinky -- the founder of GroundandPound.de, Germany’s leading MMA Web site -- told Sherdog.com. “For many years, German fans didn’t have much to cheer about when it comes to how our fighters have fared internationally, but right now, there is a new spirit of optimism going through the country.”

It should be interesting to see how long it takes Germany to catch up to Europe’s leading mixed martial arts nations like England, Russia, France and Sweden. Can the new generation link to the legendary achievements of Schmeling and Quellmalz in the boxing ring and on the judo mat?

“New shows are popping up left and right, and there is a new generation of fighters who have grown up with the sport and who are showing a lot of potential to exceed the achievements of their predecessors,” Steinky adds. “Fighters like Alan Omer, Peter Sobotta, Dawid Bazaik, Pascal Krauss, Nico Penzer or Benjamin Brinsa are still very young but are already showing a lot of promise.”