He was real, raw and eminently likeable, but at the end of the day, Harold Howard was a born scrapper who emerged in the early days of the UFC as an indelible footnote to the old school. He did not come to get rich, but merely to test himself and find out how his considerable background of street dustups translated in the Octagon.

With a final record of 2-3 in what would later become known as mixed martial arts, Howard went 2-2 in the UFC. Three of those bouts came at UFC 3 in 1994; a final Octagon fight came at UFC 7, as he lost to Mark Hall. Eleven months later, he finished his MMA career with a 1996 stoppage defeat against Hugo Duarte in Japan.

At 6-foot-2, 230 pounds, Howard rocked UFC 3 like few ever have. Sporting wraparound Oakleys, he uttered the legendary line that still lives as a revered in-joke among forum old-timers: “We’ve got a saying back home that if you’re coming on,” he fumed, whipping off the shades, “come on!”

And that he did, with a background in point-fighting contact karate, traditional jiu-jitsu and plenty of experience on the streets and as a bouncer in his native Canada, where he still resides. Howard entered the one-night tournament hoping to test himself against Royce Gracie, who had dominated the previous two UFCs with his vexing blend of ground skills, at that point virtually unmatched outside of Brazil. The evening turned out to be a mixed blessing and a series of unexpected turns.

SEG owned the promotion at that time and dispatched a representative to Howard’s home in Canada to invite him to fight.

“So I had a pretty strong seminar circuit. I was in Michigan when they came to my house,” Howard said. “Some guy had a letter and said, ‘If your husband had balls, he’ll be there.’ My wife told them I’d be there.”

That night, Howard squared off in his first match against Roland Payne, a 5-foot-9, 238-pound brawler reputed to have shins of steel. Back in the early days of the event, the only guy with a separate dressing room was Gracie, who was preparing to fight an unknown named Kimo Leopoldo. Howard and the rest of the rabble were corralled into a common room separated by curtains.

“We got an idea [of Payne] just talking to the guys we mixed around [with], but as far as a full-contact career, he was the most experienced guy there,” Howard said. “He had been in more full-contract venues than any of us. Before that, I’d never fought full-contact; I was a point fighter, but it was not a full-contact venue.”

Howard was not nervous, however. A fight, after all, was still a fight.

“I’d worked security at the bars, at my school,” he said. “I was always, like, a doorman in some big bar somewhere. As far as street fighting, I had no problems with that stuff, and my arts made it easier to handle people. I was never like a blood-and-guts type of guy, but I like being those security types of situations. I would like to handle it without getting anyone hurt.” 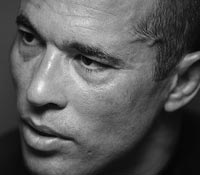 Dave Mandel/Sherdog.com
Howard wanted to test
himself against Royce Gracie.
Payne came out, guns blazing, and the two battled back and forth. Just as it appeared Payne had the edge, driving Howard back into the cage, Harold unleashed a booming right hand that crumpled him, and with the ensuing ground-and-pound, Howard had won the fight.

“He didn’t really get me,” Howard said. “[The] thing that surprised me was when he leapt off hands and knees and grabbed my legs. And I had enough savvy to get away from the bugger, but he was a strong little guy. I’ve got such a long reach on him. Even when he was kneeing me, I was keeping him at bay. He sure forced me to clock him a few times.”

The display of big-time power was at odds when you hear Howard’s speech, which, in classic Canadian style, is eminently polite, peppered with many a sentence ending in ‘eh?’

Howard exited the Octagon, one step closer to Gracie. However, the two-time UFC champion had a savage battle with Leopoldo, who outweighed him by nearly 70 pounds, finally submitting the Hawaiian before being helped out of the Octagon. Chaos and a serious monkey wrench were thrown into the works. Unbeaten in seven previous UFC bouts, Gracie suddenly looked human, and with Howard next, the tournament progressed. More men were eliminated, winners advanced and Howard geared up mentally for the reality of facing Gracie. Instead, substitute Steve Jennum filled in.

“When I won the first fight, all we were saying was, ‘We got to Gracie.’ That was the only thing we wanted to do; that was the biggest disappointment,” Howard said. “I remember after Kimo fought Gracie, he came in, and he’s no preacher. I remember they were swearing and I opened the curtain and said, ‘Shut the [expletive] up.’ When Gracie didn’t fight me, that was so disappointing. I remember saying, ‘At least we got Shamrock.’ Shamrock’s entourage was behind me when we got into the ring. I bowed to him, and I thought he was gonna get in. We got Jennum in there instead.”

Jennum -- who had some basic Brazilian jiu-jitsu and fair takedowns compared to most UFC fighters at the time -- put Howard on his back and pounded him out in less than 90 seconds. Ever classy in defeat, Howard explained in his post-fight interview that he wanted to “see if it would work … and it didn’t.” That kind of humility endeared him to fans.

Howard returned at UFC 7 in what he says was the best shape of his life -- coming into the first event he had undergone elbow surgery, which hampered his conditioning. But mentally, he was not there, given some personal problems at the time. He lost to Mark Hall in a one-sided bout. Then, in 1996, he decided to return to the game at a show in Brazil.

“I didn’t even know who Hugo Duarte was,” said Howard of the massively built grappler, who once challenged -- and lost -- to Rickson Gracie at a beach fight in Brazil. “My buddy says, ‘You wanna fight some guy named Hugo? He can’t be that tough.’ I’m 38 or 39 years old. I had a great time -- all 43 seconds of it.

“I got my arm caught in the bottom of the ropes,” Howard continued. “Back then, the Brazilians didn’t know how to punch that good [on the ground]. I was moving my arm and should have been blocking them, and I’m taking these massive blows on the melon. They ended up calling it. Then, when I watched the tape, my arm is caught in the rope.”

Life outside the ring was rough for Howard back then, as well. He was once hit by a car driven by a drunken executive.

“I was actually standing at Ontario Place in Toronto at the CNE, standing in line,” he said with a chuckle. “I guess the CEO came in after a liquid lunch and took me out of line.”

He was not able to recoup much, given his injuries from the incident.

“We battled him for seven years,” he said. “We have what they call no fault insurance up here; you don’t see any benefit of it. I almost lost my house.”

Today, Howard is the proud father of three children -- two sons, both of whom play hockey, and a daughter -- and his wife has been with him through thick and thin. His children have studied their father’s arts, which have emerged as a source of pride.

“The youngest boy is 9; he’s a blue belt and Triple-A goalie. The oldest boy is 17, a full black belt, [and] plays for a select team,” he said. “My daughter is 19 and in Western University. She’s studying to be a psychologist, so she can figure [out] what her father’s problems are.”

Howard does roofing jobs while still operating a small school -- Howard’s Self-Defense Systems in Niagara Falls -- with about 40 students. “There are lots of schools in town,” he said, “so it’s a break-even proposition running a place.” He does teach an MMA class and proudly states that he was the world’s first tournament champion in jiu-jitsu (traditional, not Brazilian) prior to entering the UFC. Occasionally, a kid will wander in wanting to get into MMA. Howard still follows today’s fight game from time to time, though with the added rules and gloves, it makes him wonder if the UFC has become less than a true proving ground for the toughest guys.

“The John Wayne stuff, where you take 50,000 blows and keep going -- that don’t exist. Fights last maybe a minute,” he said. “There wouldn’t be three five-minute rounds. The gloves are there to make the fight last longer.”

He’s still recognized on the streets of the Great White North, though he quickly adds that it’s not as common as it used to be as the years pass by. As Howard has moved on, he has taken pleasure in the challenge met and the best effort given, no matter the job.

“I just got laid off of a job, a huge renovation of [Niagara] Falls there,” he said. “It’s called The Fury, a roof made of all copper. It’s a pretty good trade. It goes along with the ancient stuff I like to mess around with. The technique is so old; there’s no nails at all. It’s all held down by clips. It’s not shingle roofing. It’s all done copper and folds into itself. The roof will last 150 years. It’s high work. I’ve always liked working up high.”

He respects modern-day fighters, noting the intense preparation and evolved cross-training that dominates the sport. Still, part of him wonders how many of them would embrace the violent, unpredictable weirdness of those early UFC days.

“Obviously, they’re focused on what they’re doing,” he said. “It’s direct focus to what you’re doing. The training is really serious, and the rules are not the same. I wonder if anybody would show up -- any size guy, like we did -- and not know who you’re fighting. You didn’t know if you were gonna get a bigger guy than you.”