Keith Hackney (above) fought in two of the first five UFCs. | Jeff Sherwood/Sherdog.com


Held on Sept. 9, 1994, UFC 3 had some notable tweaks from its two predecessors. It remained in a one-night, tournament format but with an eight-man field, instead of 16. The canvas, previously white, was replaced with a more viewer-friendly blue. It was, in a sense, a social phenomenon coming to terms with its own success, which was accompanied by an equal dose of notoriety.

Naturally, that was exactly when Art Davie, then co-owner of the UFC, made the call to Keith Hackney. It came during the peak time for Hackney’s primary business, a heating and air conditioning company he founded in 1980 and still runs today.

His background included boxing, tang soo do, five years of kenpo and a year of high school wrestling, in which he made the state tournament as a 98-pound sophomore. After Hackney responded to a magazine ad, event organizers told him the roster was full but that, perhaps, a future slot could be in the works.

“He said somebody backed out and they had a space for me. It was one week before the fight,” Hackney says. “I thought if I said no, they wouldn’t call me back in the future, so I said, ‘I don’t care. I’ll fight. Get me on a plane.’ Art said, ‘Whoa! Let me tell you who you’re competing against.’ I didn’t care. I wanted to fight.”

The lineup included two-time tournament champ Royce Gracie, Ken Shamrock, a terrifying muscled guy who went by the nom de guerre of “Kimo” and a 600-pound sumo fighter, Emmanuel Yarborough. Hackney flew into Charlotte, N.C, on Thursday night, and despite the UFC’s subtle efforts to trim away the rougher edges of the event, his debut reminded everyone watching that an ass kicking is exactly that.

“We had a press conference Friday. I was kinda sent to the dogs. They had a punch bowl and envelopes with our names in them in a circle,” he says. “Jim Brown was picking them out of the punch bowl at random. The first guy they picked was the sumo guy, and the second was me.”

“Yarborough’s manager told my kids to break out their piggy banks and bet on him and [jokingly] suggested I take a dive,” Hackney says. “That was funny.”

Birth of ‘The Giant Killer’

What ensued was something that simply cannot be replicated today, its potent combination of freak-show violence and small-man budo compressed into 1:59 of chaotic scrapping. Hackney’s destruction of Yarborough was a first in the modern annals of David versus Goliath-style beatings, and he became an instant fan favorite by toppling a man who weighed three times more than him -- and was 6-foot-8, to boot. Since then, the sport has provided countless moments to remember, but Hackney-Yarborough remains one of those gems that seems impossible to replicate. You could not un-see it.

The gameplan was simple -- kick ass. To be realistic, the behemoth was fat, but he was as strong as he was rotund.

“He was curling 315 pounds 20 times in a row on camera,” says the 5-foot-11, 200-pound Hackney. “We talked about kicking his legs, but what kind of leg kick are you going to do on him? I went in there to give him the fight of his life, and whether I won or lost, he was gonna know he was in a fight.” 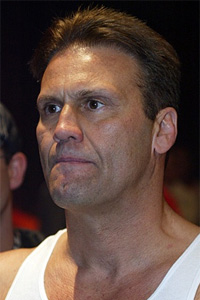 J.Sherwood
Hackney aimed to put his kids
through college with the money.
After some back-and-forth in the bout -- which included Hackney spilling out of the cage when Yarborough rammed him against the door -- he went for the kill.

“It’s a White Crane strike, an open hand palm that comes in a circle and straight over the top like an overhand right,” Hackney recalls. “We worked on that in kenpo. I went for the center of the nose to smash the nose through the head, but I kind of caught him off-side on an angle.”

Yarborough crumpled from the blow, delivered by Hackney while he leaped through the air. Turtled up, the massive sumo man was suddenly human and could not get back to his feet. Hackney turned on the afterburners, hammering home a series of winging rights, breaking his hand in the process, and flinging more at Yarborough’s head to finish the job.

“The announcer was yelling, ‘He has no chokes!’ I’m thinking, ‘You idiot. This guy’s head is bigger than a basketball. Do you know how big his neck is?’ I tried to pound on his head like nails on a roof,” Hackney says. “I put two knuckles into an eye socket. If it
was a normal guy, I’d have crushed his skull.”

Hence, his nickname, “The Giant Killer,” was spawned. With his hand injured from the Yarborough bout, Hackney was informed by the attending physician that he could not continue. It was a bittersweet exit.

With a $1000 purse, he was disappointed that he couldn’t continue to the semifinals against Ken Shamrock, which paid $5000, putting him a win away from the $64,000 bonanza for the tournament winner. Ultimately, the prize went to yet another substitute, Steve Jennum, who defeated Harold Howard when Shamrock could not continue after his win over Felix Mitchell. Gracie faced a similar predicament. Banged up and exhausted after his titanic struggle with Kimo Leopoldo, the two-time UFC tournament winner was in no shape to advance, either.

“Realistically, I went in to win that $64,000 to put my kids through college,” Hackney says. “I came there two days before and didn’t know the rules. I later found out if I’d gone into the cage against Ken and then thrown in the towel like Royce did against Howard, I’d have gotten the five grand. I was pissed afterward.”

By now, the opponent selection process had evolved, from a punch bowl to a lottery. Hackney drew Joe Son, who, at 5-foot-4 and 236 pounds, had accompanied Leopoldo into the ring at UFC 3, charged-up and screaming at the top of his lungs.

“The lottery bowl -- they bring it out and it’s going in slow motion,” Hackney says. “Apparently, there were some problems with it. They had Royce’s ball in the thing, and it’s like: What is this bulls--t? It’s barely moving, the ball lifts up, and he gets Ron van Clief [for his first opponent]. After that, the machine is working fantastic. I got Joe Son.”

“
It’s a White Crane
strike, an open hand
palm that comes in a
circle and straight
over the top like
an overhand right

”
-- Hackney on his famous strike

Hackney had another competitive tussle, and once more ended the fight memorably. After Son drove to take him down, he slid across the mat while sprawling. Then, in side mount with his foe stretched out on his back, Hackney uncorked what would become known as the “Nut Shot Heard ’round the World.”

“The way I looked at it, when we stepped into that cage, we were fighting within the rules. I didn’t bite or eye gouge anybody. They were the only things you weren’t allowed to [do], but if you did it, you’d just lost $1,000,” he says. “But nobody said anything about groin shots. I’d probably do some different things today.”

After softening up Son -- along with any male viewing the event for the first time -- with the below-the-belt blows, Hackney then applied a choke for the tapout at 2:44. Fittingly, the clip of the punches was used later on a Fox News report in 2008, when Son was arrested after a DNA sample linked him to a 1990 gang rape.

“While they were on the news that this UFC guy did whatever, they had a picture of me smacking him in the balls, saying he got what he deserved,” Hackney says.