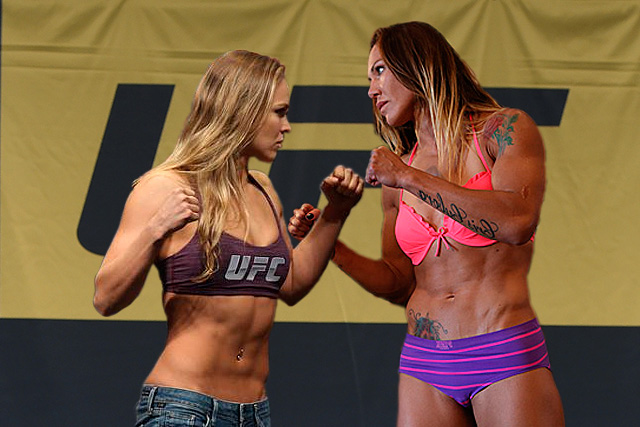 The bout is the first step in what could be a very significant move down the scale for the Brazilian. Unless you’ve been living under a rock for the past couple years, you are keenly aware that this means that we are inching closer to the Cyborg versus Ronda Rousey mega-fight that has kept mixed martial arts fans salivating.

Rousey and UFC President Dana White both have remained adamant that Justino will have to make the weight limit of 135 pounds in order for this fight to happen. With Justino being dominant in Invicta FC at 145 -- and looking like she has very little fat left to burn off -- the challenge she faces to shed another 10 pounds is significant. Cutting down to 140 is certainly a sign that Justino is at least dedicated to trying to make this fight happen.

But how much closer are we, really?

Of course, Justino has to not only make the weight but also win her November fight against an opponent to be decided. The opponent isn’t as much of a big deal as the battle that the Brazilian will have with the scales leading up to that fight.


It’s not “just” five pounds that Justino is cutting off her ultra-fit body. Back in March, Justino throttled Charmaine Tweet in 46 seconds at Invicta FC 11. Three days after that 145-pound fight, Justino tweeted a picture of herself on a scale, weighing in at 175 pounds. To those unfamiliar with the weight-cutting process, 30 pounds gained in 72 hours sounds absolutely insane.

Justino has never competed at bantamweight in her entire professional career but will have to do so in order to make the fight that the world will want to see. In truth, Rousey-Cyborg just might be the biggest fight that can be made in all of combat sports now that Floyd Mayweather-Manny Pacquiao has happened and Jose Aldo-Conor McGregor is booked for December.

There’s plenty of money in a Rousey-Cyborg fight for both fighters, especially Justino, who should easily make more in that fight than she’s ever made in her career. It make sense that she will do whatever it takes to make it down to the bantamweight division, but five pounds only gets Justino halfway there. Chances are, if she makes 140, her next fight will be in the UFC at 135, but not against Rousey. The UFC simply cannot run the risk of making the fight and having the Brazilian fail to make weight. She’s going to have to prove that she can make 135 and, more importantly, win a fight in the division.

Rousey holds all the advantages here as the champion and the “A-side” of this fight. If Justino somehow manages to get down to bantamweight, it’s hard to believe that she will possess the same frightening power that she has displayed in her last eight fights, none of which have required the judges. (It would be nine, but Justino’s first-round win over Hiroko Yamanaka was overturned after Justino tested positive for stanozolol in 2011.) A drained Justino will likely be a weaker version of the woman who hasn’t lost an MMA fight since her first professional go back in 2005.

The idea here is to have Rousey and Justino square off at UFC 200 next year. With Rousey likely taking an extended vacation after facing Holly Holm at UFC 193, all eyes would be on Justino as she chases the weight. A November fight at 140 and an early-spring bout at 135 would set the stage for the most anticipated fight in the UFC to take place on July 2, 2016, at Las Vegas’ new and still-under-construction venue, MGM-AEG Arena.

The pressure will be squarely on Justino’s shoulders to make weight, but even if she does get down to 135, how good can anybody feel about a weakened Justino facing the mauling machine that is Rousey? The casual fan won’t care because they will get the fight that the MMA world has been chatting up for the past few years. Even the more hardcore fans will be satisfied as long as the fight happens. But will Justino have a change of heart?

If, for some reason, Justino’s body doesn’t take well to 140, will she even try to make 135? Will it be about the money or the risk? Just looking at Justino, one wonders how she can make bantamweight without losing a limb. Regardless, knowing that Justino’s trek begins in two months, we will all be focused on whether or not we are closer to the women’s MMA version of Mayweather-Pacquiao.

Hopefully we won’t have to wait five years for this one to happen.