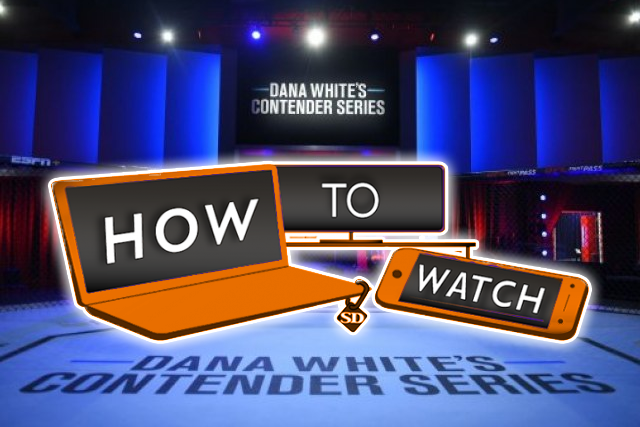 Sign up for ESPN+ right here, and you can then stream Dana White’s Contender Series live on your smart TV, computer, phone, tablet or streaming device via the ESPN app.

Through three episodes of Dana White's Contender Series so far this season, the show has put on 15 bouts and sent the same number of fighters to the Ultimate Fighting Championship. One winning fighter, Week 3’s Mo Miller, was denied a contract, while one losing fighter, Carlos Candelario, was signed for his part in a Week 1 barnburner with Victor Altamirano. Aside from those two outliers, the pattern has been clear as day: Win your fight, get the call-up.

Only time will tell whether the signing bonanza continues this Tuesday at DWCS Week 4 — though given the UFC’s grueling schedule and the need for replacement fighters due to injuries and Covid-19, it seems likely — but the 10 fighters who are slated to duke it out in front of the boss man feature quite a few prospect who, by the eyeball test, seem ready for the next step. They include a season-high four undefeated fighters as well as a current and former champ from one of the UFC’s fastest-rising feeder promotions, Texas’ Fury Fighting Championship.

Of the aforementioned undefeated prospects, someone’s “O” will have to go in the featured fight, as 6-0 Jordanian middleweight Hashem Arkhagha takes on 5-0 Columbus, Ohio, native A.J. Dobson. The co-feature pits 11-0 Michael Morales against Fury welterweight champion Nikolay Veretennikov a Kazakhstani by way of Texas whose 9-3 ledger features wins over UFC veterans Anthony Ivy and Charlie Ontiveros. Former Fury lightweight champ Victor Martinez will bring his six-fight win streak to his matchup with Legacy Fighting Alliance standout Jacob Rosales. Martinez, who has not fought since a first-round knockout win in Combate Americas in December 2019, should already be familiar with the UFC Apex, as a longtime training partner and corner second for UFC lightweight contender Diego Ferreira.