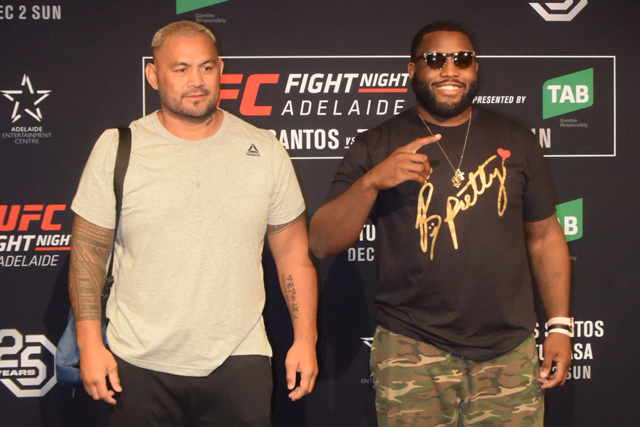 
ADELAIDE, Australia -- If you have been following the career of heavyweight contender Justin Willis, you know by now the 31-year-old does not lack confidence.

Rocking khakis, a “Big Pretty” customized T-shirt and shades, the 15th-ranked contender in the Ultimate Fighting Championship’s heavyweight division exuded something like serenity when he spoke to Sherdog.com at UFC Fight Night 142 media day on Thursday.

Asked about what he needs to do to fast track to the top of his weight class, Willis is not cutting any corners and says his plan is to take “everybody out” on his campaign.

“I’m just biding my time, destroying everyone in my way,” he said. “My only goal is just to win. I don’t really put too much extra on it. I prepare myself to win and win in dominating fashion. That’s what I’ll do. That’s what you’ll see on [Saturday].”

When asked about co-main event opponent Mark Hunt, who will likely compete under the UFC banner for the last time before taking his skills to another organization, Willis eschews any concern for showing him the door in his swan song.

“Big Pretty” also had little concern for the acrimony between Hunt and the UFC -- the 2001 K-1 World Grand Prix winner is currently bringing a lawsuit against the organization for allegedly allowing Brock Lesnar to compete against him while on steroids at UFC 200 -- saying that is “man business” he does not want to get involved in.

One topic that did get his attention, however, was the trilogy fight between Chuck Liddell and Tito Ortiz on Nov. 24, which Willis derided as “an embarrassment” that should never have taken place.

“As a person who grew up watching Chuck Lidell and Tito, they both need to give it up, hang it up,” he said. “People in both of their camps need to tell them it’s time to hang them up.”

As to what was responsible for the shambles? Willis had his theories: “Pay. People ain’t getting paid enough. If you don’t have a 401k set up, you gotta do what you gotta do later in your career.”

For what it is worth, Willis does not see similar troubles in his future. When asked what he was going to do to ensure he would not still be fighting at an advanced age, he had few misgivings.

“Let me put it like this, I’m gonna be in Tahiti drinking mai thais when I retire,” he said. “I’m gonna take over the sport.”