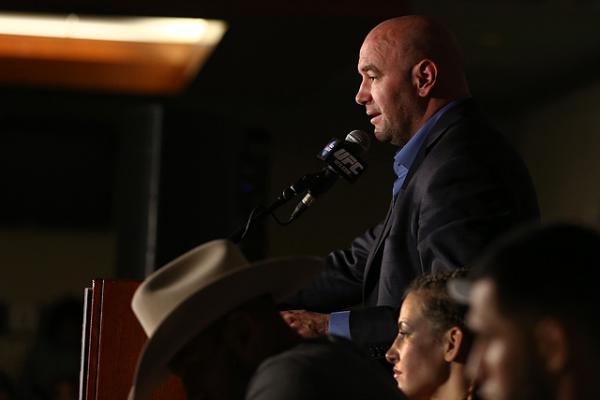 Earlier this week, the United States District Court in Nevada made an important decision in Ultimate Fighting Championship heavyweight Mark Hunt’s ongoing lawsuit against Zuffa -- the UFC’s parent company -- and Brock Lesnar, which the “Super Samoan” filed in the wake of Lesnar’s failed drug test for UFC 200. Specifically, the court ruled in favour of Zuffa’s motion to keep Hunt’s UFC contract(s) under seal, which means that, contrary to the presumption favoring public access to judicial records, these documents will remain for the court’s eyes only.


Advertisement
It’s a disappointing decision. Hunt’s legal counsel did not contest the motion, and the court seemed willing to accept the argument that public disclosure of the documents would “harm Zuffa’s contractual relationships with other fighters and its competitive standing with MMA promoters” at its face value.

The UFC also had the testimony of one of MMA’s most influential and controversial managers, Ali Abdelaziz, in its corner. Abdelaziz, who manages lightweight champion Khabib Nurmagomedov among scores of other high-profile names, made a declaration stating that many fighters wish to keep their compensation a secret so as to protect from kidnapping and extortion threats -- no, really -- and because it could somehow disadvantage them in contract negotiations with the promotion.

The testimony of Abdelaziz is troubling to say the least. Not only does it appear that an agent is going to bat for a promoter without any apparent benefit to his clients -- whose best interests he is legally obligated to prioritize -- but it also seems to contradict Zuffa’s argument that if more was known about how fighters are compensated, that would compromise the company’s bargaining position.

One might have expected a court to interrogate such a discrepancy, or perhaps take note of the fact that information on athlete’s compensation is readily available in most other major sports with few reports of kidnappings. Unfortunately, it did not.

The good news is that the same issue has arisen in the ongoing antitrust lawsuit against Zuffa, where plaintiffs are opposing Zuffa’s motion to keep a number of documents under seal. That means there’s hope more light will be shed on the promotion’s business practices and fighter relations in the future, which I’ll discuss in greater detail below.


It should come as no surprise that secrecy is a central part of how the UFC runs its business.

As a private company, the UFC is not required to publicly disclose its revenues or profit margins, and whilst a small number athletic commissions (such as in Nevada and California) disclose payouts for MMA events, these do not include “locker room bonuses” and other side deals, painting an incomplete picture of fighter finances.

In the past, UFC President Dana White liked to claim that fighters kept their purses a secret out of self-preservation -- a disconcertingly similar claim to that in Abdelaziz’s declaration. But the reality is that fighters are legally forbidden from disclosing the terms of their contract courtesy of a confidentiality clause.

This clause, and the rest of the standard Zuffa contract, became public record in 2013 after then-free agent Eddie Alvarez was sued by his former promoter Bellator MMA. It states that “fighter[s] shall not disclose to any third party… any information with respect to the terms and provisions of this Agreement or any Bout Agreement”, alongside other controversial elements like the champion's clause, which automatically extends a fighter’s contract if they hold a title at the expiry of the agreement, and the retirement clause which gives the UFC the right to retain the rights to a retired fighter in perpetuity.

This muzzle -- which the court referenced in its otherwise brief ruling -- is an important tool that has historically allowed the UFC to control the narrative around fighter pay and disguise the exploitation its business perpetuates.

Whereas White has in the past claimed that fighter salaries are “on par with all the other sports leagues out there” and former Zuffa CEO Lorenzo Fertitta told ESPN in 2012 that fighters made “not far off what other major sports leagues pay as a percentage of revenue," fighters have been legally obstructed from corroborating or refuting such an argument by reference to their own individual circumstances.

Likewise, for many years, journalists have cautioned against debating the fairness of fighter pay because, to use the words of one influential media member, “[n]o one can say with certainty because we don't really know what they earn or how much the UFC makes.”

More recently, the investigate efforts of journalists like Bloody Elbow’s John Nash have revealed the claims of White and Fertitta to be wildly untruthful. The UFC pays fighters, inclusive of bonuses and other back room deals, a very small portion of the revenue their fights generate -- approximately 15 percent compared to 50 percent for the NBA, NFL, NHL and MLB -- with a median bout payout of just $22,000 between 2013 and 2015.

In the context of increasing labor unrest amongst the UFC roster, fighters are also becoming more willing to disclose their financial circumstances -- including how the promotion’s bonus system has been used as a hammer to silence dissent.

And yet even in the face of this data, the organisation uses mediums like "The Ultimate Fighter" to grandstand about being “the only fight organisation on the planet… where [fighters] can make millions of dollars” whilst myths about the UFC’s otherworldly compensation persist.

In other words, the veil of secrecy is doing exactly what the UFC intended it to do.

Peeking Under the Curtain


It’s important to note that MMA promotions are far from the first organizations to seek to hide information about their compensation practices from employees and the wider public.

Players' associations in major league sports had to fight for years for full disclosure as part of wider reforms spearheaded through collective bargaining, and only after the Muhammad Ali Boxing Reform Act was passed in 2000 have boxing promoters across the country been required to disclose most (but not all) of what fighters make for events held in the United States.

Outside of sport, wage secrecy is also an ongoing social problem. Although United States federal labor law makes it illegal for employers to prevent employees from discussing their wages and working conditions, in recognition of their harmful effects on labor organizing, this often doesn’t deter large companies from doing that anyway. More recently, campaigns requiring employers to make their pay records publicly accessible have also been mounted in places like Australia and the UK as part of a wider effort to address the gender pay gap.

For UFC fighters, there are a number of means through which the curtain may be pulled down, though none are especially promising in the current climate. As prefaced above, information on fighter compensation may become publicly accessible through the antitrust litigation.

Alternatively, fighters may soon be classified as employees, as part of former UFC bantamweight Leslie Smith’s labor dispute currently being heard by the National Labor Relations Board. This wouldn’t do anything automatically -- except perhaps making it harder for the UFC to enforce its confidentiality provisions due to the aforementioned laws against wage secrecy. But it could conceivably jump-start the push towards unionization, and if that happens, it would make it much easier for fighters to secure disclosures about compensation practices, for example through a collective bargaining agreement.

Finally, if legislation expanding the aforementioned Ali Act to MMA passes, it will require the UFC and other MMA promotions to disclose fighter salaries on a much greater scale than they do presently -- although, again, this wouldn’t require complete transparency.

Jacob Debets is a recent law graduate who lives in Melbourne, Australia. He has been an MMA fan for more than a decade and trains in muay Thai and boxing at DMDs MMA in Brunswick. He is currently writing a book analyzing the economics and politics of the MMA industry. You can view more of his writing at jacobdebets.com.
Latest News
ALLUFCBELLATORPFLONE