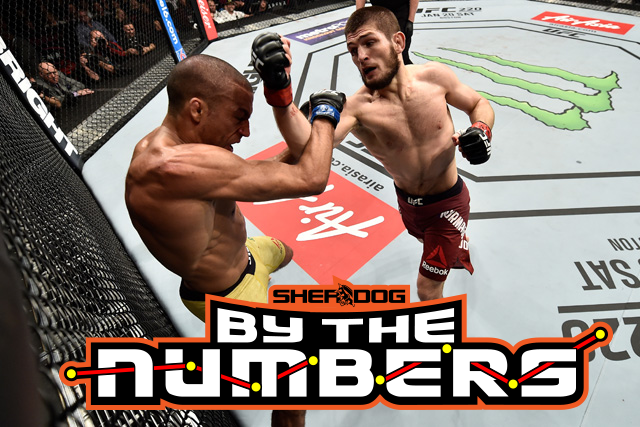 Khabib Nurmagomedov was close to facing Tony Ferguson and Max Holloway -- the former on more than one occasion -- but injuries got in the way, leaving fans to ponder and debate those dream matchups.

However, Nurmagomedov will test the biggest of big-name opponents in the UFC 229 main event on Oct. 6, when he defends his undisputed Ultimate Fighting Championship lightweight crown against former two-division titleholder Conor McGregor at T-Mobile Arena in Las Vegas.

Ahead of Nurmagomedov’s anticipated showdown with the “Notorious” Irishman, here are some of the numbers that have come to define him:

2: Combat sambo world championships to his name. Nurmagomedov is also a prolific wrestler with a black belt in judo, making him one of the most formidable grapplers in all of MMA.

4: Bouts in the first month of his professional career. Nurmagomedov debuted with a triangle choke submission of Vusal Bayramov at a Combat Sambo Federation of Ukraine event on Sept. 13, 2008. He then fought three times in one day at the Pankration Atrium Cup on Oct. 11 in Moscow, where he took decisions from Magomed Magomedov, Ramazan Kurbanismailov and Shamil Abdulkerimov to win the tournament.

16: Wins without a loss in Russia and Ukraine before the UFC signed him to a six-fight deal. Nurmagomedov’s long list of regional victims includes Shahbulat Shamhalaev, former Bellator MMA featherweight title challenger and Season 7 tournament winner. He submitted Shamhalaev with an armbar.

10: Victories without a defeat in the UFC. Nurmagomedov’s first casualty was Kamal Shalorus, as he submitted the World Extreme Cagefighting veteran with a rear-naked choke in the third round. He has also beaten Gleison Tibau, Thiago Tavares, Abel Trujillo, Pat Healy, Rafael dos Anjos, Darrell Horcher, Michael Johnson, Edson Barboza and Al Iaquinta.

26: Career wins on his resume. Nurmagomedov has won 10 fights by decision, eight by submission and eight by knockout or technical knockout.

21: Takedowns registered against Trujillo, the most he has secured in a single fight. Nurmagomedov put his tools to use in a unanimous decision at UFC 160.

75: Significant strikes landed in his technical knockout against Horcher at UFC on Fox 19, per FightMetric. Horcher connected for only six.

94: Significant strikes landed against Johnson at UFC 205. Nurmagomedov did the majority of his damage on the ground before submitting “The Menace” with a rear-naked choke 2:31 into the third round.

134: Significant strikes landed against Iaquinta in the UFC 223 main event. There, Nurmagomedov cruised to another lopsided decision that brought him the vacant UFC lightweight championship.