Josh Koscheck rebounded from his late-October loss to Thiago Alves with a win Wednesday over Japanese welterweight Yoshiyuki Yoshida.

The bout headlined the UFC’s “Fight for the Troops” at the Crown Coliseum in Fayetteville, N.C., which raised money for the Intrepid Fallen Heroes Fund.

Koscheck had fought Alves on short notice and then Yoshida on little rest by UFC standards. Both bouts were risky, but at least the Yoshida fight paid off as Koscheck scored the knockout of his career and got back on track in the UFC’s 170-pound division.

After a two-minute feeling-out period, Koscheck, Sherdog.com’s No. 4-ranked welterweight in the world, hurt his opponent with a straight right to the chin. The blow buckled Yoshida, who dropped his hands and stood prone for Koscheck to wing another right that landed flush and laid Yoshida flat. The official time was 2:15.

“I knew he was looking for the overhand right a lot, so I just focused on throwing straight punches,” Koscheck said.

Mike "Quick" Swick returned to the swift mode of victory of his first four UFC bouts by stopping Jonathan Goulet just 33 seconds into their welterweight match.

Goulet (22-10) had covered up when Swick swarmed him with punches, but a short right got through to his jaw. Swick stopped the desperate takedown attempt that followed and kept punching until referee Dan Miragliotta called the fight. 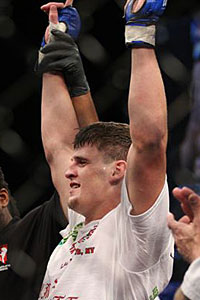 The 22-year-old from Las Vegas stayed calm while fellow UFC newcomer Razak Al-Hassan commenced a jittery, chin-up pursuit of Cantwell in the first round. Cantwell responded well to the pressure, patiently defending Al-Hassan’s unorthodox attack while picking his own shots.

The end came after Cantwell slapped his foe’s face with a kick and completed a takedown. Al-Hassan, 26, of Des Moines, Iowa, soon found Cantwell cranking his arm at an outrageous angle. He would not surrender to the armbar, though, forcing referee Mario Yamasaki to stop the fight at 4:04.

“That's so sweet,” said Cantwell, who improved to 7-1. “I've been waiting so long to do that. I can't believe this dude didn't tap sooner.”

The first round of Tim Credeur’s middleweight bout with Nate Loughran unfolded on the feet. Credeur, 31, a Brazilian jiu-jitsu black belt from Breaux Bridge, La., was the better, more aggressive striker. Loughran looked stiff and preferred to kick while Credeur landed often with overhand rights and left hooks.

Loughran, 28, of Santa Rosa, Calif., decided he’d rather fight on the ground in the second round and shot in for a takedown. Credeur took the top position on the mat, though, and easily avoided submission attempts before the fighters were restarted on the feet. Standing, the bout still belonged to Credeur, who connected at will on an open-mouthed and cut Loughran.

Loughran, who suffered his first defeat in 10 bouts, did not come out for the final round.

“I came to 'The Ultimate Fighter' and the UFC to fight the best in the world,” Credeur said. “Nate Loughran's 9-0. That's the kind of competition I came here to compete against. ... To be able to do it in front of the troops … I tell you what, this is one of the best experiences of my life.”

A 25-year-old lightweight prospect fighting out of Whippany, N.J., Miller threatened with a deep guillotine choke in the first round.

The guillotine “was on pretty good, but he was squirming, and I knew it was only a matter of time before my arms gassed out,” Miller said after the fight. “I did only take [the fight] on a week’s notice."

Wiman, 25, eventually escaped and scored with some punches, but Miller landed the best strike of the period by planting a kick into his opponent’s body.

The second round was all Miller. He landed again and again on the feet, with both hands, before taking the fight to the ground and resuming his work there.

Wiman, who had won four straight in the UFC, came out firing in the final round, but Miller wisely dumped him to his back. In the end, Wiman survived the full 15 minutes but had no answer for Miller’s superior standup, wrestling and ground control.

“Matt's tough as hell,” said Miller, now 13-1. “I've never hit someone so hard so many times and had them still standing there.”