Middleweight Joe Doerksen (40-12) has verbally agreed to square off against Travis Lutter (9-5) in November. Due to a misunderstanding, MM-Eh initially reported that the bout was expected to take place at UFC 91, but Doerksen has since clarified that the fight is expected for a non-UFC event in Texas. Contracts have not yet been signed, Doerksen said, but it was Lutter’s camp that requested the matchup.

With more than 50 bouts to his credit, Doerksen is one of Canada’s most experienced fighters with both big wins and losses on his docket. He boasts victories over UFC veterans Patrick Cote, Ed Herman, and Chris Leben, but has succumbed to Joe Riggs, Matt Lindland and Nate Marquardt.

Doerksen dropped a second loss to countryman Jason MacDonald via a second-round TKO at UFC 83 last April in Montreal. Most recently he defeated John Meyer at the outdoors Venom at the Snakepit event on Aug. 29 in Calgary, Alberta.

A one-time contender for 185-pound champion Anderson Silva’s title, Lutter has not seen action since April, when he fizzled against former champion Rich Franklin, also at UFC 83.

Joining his countryman Doerksen on what is shaping up to be the UFC’s money-maker event for 2008, Toronto’s Mark Bocek (5-2) will also be fighting on the “Couture vs. Lesnar” card, where he’ll be pitted against Denver standout Alvin Robinson (9-3).

Canada’s most decorated Brazilian jiu-jitsu black belt says he asked the UFC for a fight in November, and he knew exactly who Robinson was when the lightweight was offered to him. He accepted immediately.

Bocek joined the UFC in 2007 with only four fights under his belt and certainly wasn’t given any free passes. He’s gone 1-2 inside the Octagon with a win over Douglas Evans and losses to Frankie Edgar and Mac Danzig.

“It’s kind of funny that I’ve made more fans off of that loss than from any wins,” Bocek said of the Danzig fight, “but I’m making sure to reverse that now.”

The bout with Robinson should give Bocek an opportunity to match his Nova Uniao-stamped ground skills against Robinson, a brown belt under John Crouch and Royce Gracie.

“I see it as a matchup of two grapplers and I think I’m the better grappler,” said Bocek. 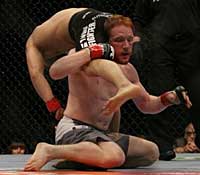 Photo by Sherdog.com
Mark Bocek (above) will take
on Alvin Robinson at UFC 91.
To prepare, Bocek plans to join a formidable squad and its training staff in American Top Team, out of Coconut Creek, Florida, up until fight time.

“A lot of those fighters are BJJ black belts turned MMA fighters like myself. They’ve got really good lightweights,” said Bocek. “I’m really looking forward to training with Marcelo because he’s such a fun guy to be around –- he’s such a nice guy and so good at jiu-jitsu.”

Goulet vs. Swick back on

This first rendezvous was originally scheduled for UFC Fight Night 11 in September 2007, but was called off when Mike Swick sustained a rib injury in training. Now it appears Swick (12-2) and Jonathan Goulet (22-9) will finally meet at “The Ultimate Fighter 8” live finale on Dec. 13 in Las Vegas.

Goulet shared “fight of the night” honors with opponent Kuniyoshi Hironaka at UFC 83 in Montreal, taking home a $75,000 bonus purse and a second-round TKO for his efforts. It was the Canadian striker’s third consecutive victory.

The Victorville native’s upcoming bout with Swick seems to come with a backstory.

According to Goulet, American Kickboxing Academy’s Swick turned the fight down in the first go-around. Goulet says when he mentioned the rejection to his friend and training partner David Loiseau, “The Crow" suggested that Goulet bring his challenge to the Internet, which Goulet did on several forums.

In the post Goulet asked, "Is he scared to go to sleep against me?"

Swick's trainer and manager Bob Cook quickly clarified that his fighter agreed to the matchup immediately after it was offered.

"We jumped at him," said Cook. "We have no problem fighting Goulet."

Krzysztof Soszynski impressed everyone with his quick dispatching of Mike Stewart on the premiere episode of “The Ultimate Fighter 8” on Spike TV last Wednesday, winning via TKO only 20 seconds into the first round.

Though new to some viewers, Soszynski’s is far from a stranger to the fight scene. The Polish-born fighter rose to prominence in TKO before moving on to the now defunct International Fight League and Bas Rutten’s Anacondas squad.

Soszynski moved to Canada when he was 10, where he lives with his wife in Winnipeg, Manitoba. An earlier member of Team Tompkins, Soszynski now travels to the States to train as a part of Team Quest’s Temecula, Calif. chapter, led by Dan Henderson.

A promoter himself for Winnipeg’s Ultimate Cage Wars, Soszynski and his wife recently relinquished his involvement with the organization in a press release.

“Effective immediately, GeneviÃ¨ve and I (Krzysztof) will no longer be partners in Ultimate Cage Wars (UCW),” it read. “We were not happy with the direction of the company nor the way certain departments were run. If you chose to continue business with UCW we wish you all the best… GeneviÃ¨ve and I are looking forward to starting a new promotion in the fall of 2009.”

“As long as I break even and we have a good show and the fans are happy then I’m happy at the end of the day,” said Houshiar.

With the announcement of the full card slated for Oct. 25 at famous Stampede Corral, Calgary fans should have reason to be happy. In addition to the world-class main event featuring middleweight standouts Denis Kang and Marvin Eastman, RAW has now announced the addition of Victor Valimaki, Garett Davis, Andrew Buckland, and others to the card: