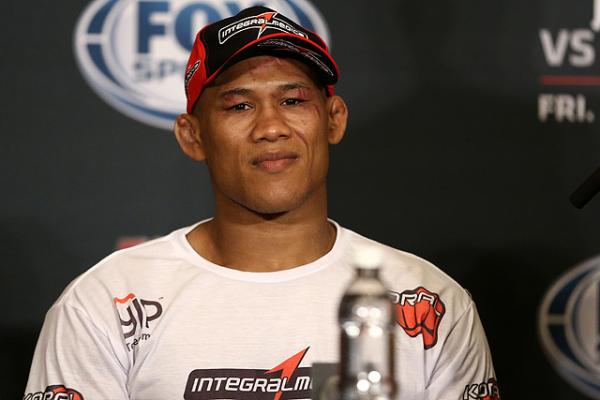 A little less than six years after a Gegard Mousasi upkick knocked him silly in the 2008 Dream middleweight grand prix final, “Jacare” returned the favor and submitted the former Strikeforce champion with a third-round guillotine choke in the UFC Fight Night “Mousasi vs. Jacare” main event on Friday at the Foxwoods Resort Casino in Mashantucket, Conn. Souza coaxed the tapout 4:30 into round three and planted his flag as the No. 1 contender in waiting within the Ultimate Fighting Championship’s 185-pound division.

“Jacare” brought all his firepower to bear, as he dominated his adversary for the duration. Whether on the feet or on the ground, Souza was the superior fighter and, aside from a few jabs, had Mousasi in an almost constant state of reactive retreat. Nothing “The Dreamcatcher” tried had the desired effect.

In wake of UFC Fight Night “Jacare vs. Mousasi 2,” here are six matchups that ought to be considered:

Ronaldo Souza vs. Chris Weidman-Vitor Belfort winner: On a seven-fight tear that includes victories over Mousasi, Francis Carmont and Yushin Okami, Souza has effectively climbed the middleweight ladder. Frankly, the 2005 Abu Dhabi Combat Club Submission Wrestling World Championships gold medalist has nothing left to prove before challenging for Ultimate Fighting Championship gold. Souza still must wait his turn, at least until the first quarter of 2015. The undefeated Weidman will defend the 185-pound title against Belfort in the UFC 181 headliner on Dec. 6 in Las Vegas.

Gegard Mousasi vs. Luke Rockhold-Michael Bisping loser: Mousasi simply looked overmatched in tangling with “Jacare” for a second time. The onetime Strikeforce, Dream and Cage Warriors Fighting Championship titleholder succumbed to repeated takedowns and waded through various submission attempts before tapping to a guillotine choke from the Brazilian grappling savant in the third round. It was Mousasi’s first submission defeat in more than eight years and leaves him on unsteady footing in a competitive and deep middleweight division. The American Kickboxing Academy’s Rockhold will do battle with Bisping in Nov. 8 in Australia.

Ben Rothwell vs. Matt Mitrione: Though he entered the Octagon as a significant underdog, Rothwell paid no attention to the odds. Instead, he walked through onetime Strikeforce champion and 2010 K-1 World Grand Prix winner Alistair Overeem, scoring a decisive stoppage midway through the opening round of their heavyweight showcase. However, Rothwell did not escape the bout unscathed, as a kick from the Dutchman reportedly resulted in a broken arm. Once he heals from the injury, the monstrous Wisconsin native will return to the cage on the strength of back-to-back wins. Mitrione, meanwhile, derailed Derrick Lewis, as he put away the former Legacy Fighting Championship titleholder in just 41 seconds.

Joe Lauzon vs. Edson Barboza: In his first appearance in some nine months, Lauzon turned away “The Ultimate Fighter” Season 15 winner Michael Chiesa in an entertaining confrontation at 155 pounds. The 30-year-old post-fight performance-bonus hawk weathered several harrowing exchanges to stop Chiesa on a nasty second-round cut. The horizontal gash above the right eye came as the result of a quick knee strike from Lauzon, who improved to 11-6 in UFC competition. Barboza, a former Ring of Combat champion who has shown flashes of brilliance throughout his career, last appeared at a UFC Fight Night event in July, when he waylaid Evan Dunham with a kick to the body and follow-up punches.

John Moraga vs. Jussier da Silva: The opportunistic Moraga capitalized on a second-round mistake from Justin Scoggins and submitted the promising American Top Team prospect with a guillotine choke, strengthening his position as one of the world’s premier flyweights. An Arizona Combat Sports-MMA Lab representative, the 30-year-old Moraga is 9-2 over his past 11 outings, losing only to 125-pound champion Demetrious Johnson and top contender John Dodson. Da Silva has recorded consecutive victories against World Extreme Cagefighting veteran Scott Jorgensen and onetime Bellator MMA titleholder Zach Makovsky, re-establishing himself as a threat in the still-developing flyweight division.

Alistair Overeem vs. Brendan Schaub: Overeem’s days as an elite heavyweight appear to be behind him. The 34-year-old Jackson-Wink MMA export was victimized by a clubbing Rothwell right hand to the temple and follow-up punches on the ground, moving him to a disappointing 2-3 since he touched down in the UFC in December 2011. Overeem’s chin has now betrayed him three times in his last four fights, resulting in knockout losses to Rothwell, Travis Browne an Antonio Silva. A finalist on Season 10 of “The Ultimate Fighter,” Schaub has not competed since dropping a contentious split decision to former heavyweight champion Andrei Arlovski at UFC 174 in June.
SHARE ON FACEBOOK SHARE ON TWITTER
Related Articles
Latest News
+ VIEW MORE