I’m wary of producing another feature cobbled together from the same monotonous, interchangeable material about how a fighter got into the sport, when he first saw the UFC, who he trains with and how often.

I'm on the phone with undefeated prospect Nick Denis, an entrant in Sengoku’s featherweight tournament this Friday at Yoyogi National Stadium Second Gymnasium in Tokyo. I’m desperate for a hook, a theme, a motif, a narrative of some kind. I’ve opted to be deliberate in its pursuit; I anticipate that any fighter who carries a moniker like “The Ninja of Love” is bound to have some intriguing inner thoughts.

“Tell me something interesting,” I urge him following our exchange of pleasantries. “Not necessarily about yourself -- could be about anything in the world.”

“Something interesting,” he repeats. After a “hmmm,” he suddenly declares, “Zombies.”

“Yeah, I really believe they could be true,” Denis tells me. “You know, the zombie populace, I can see that being real. I think about what would happen if zombies attacked all the time.”

When I ask him to name his favorite zombie film, he affirms that George A. Romero’s original “Dawn of the Dead” is his personal superlative. Naturally, he has already absorbed Max Brooks’ “The Zombie Survival Guide,” standard course reading for any budding zombiologist and has recently started on Brooks’ follow-up, “World War Z.” Without any more coaxing, I’m suddenly knee-deep in Zombies 101.

“I can believe that a virus could cause people to turn into zombies but not like in the movies,” he says. “Zombies don’t break down nutrients, so they couldn’t get faster, stronger and deadly like in the movies. They don’t really breathe even; they aren’t using oxygen. Blood doesn’t run in their veins; their brains don’t really work. But everything other than that is 100 percent believable.”

There’s an honest levity to Denis’ zombie obsession, but that’s not to say he’s being sarcastic. Nor is he the victim of gullibility and an overactive imagination, cultivated by too many Romero and Fulci flicks. Rather, he’s a legitimate scientist in bloom.

As yet, the boldest bits of Denis’ curriculum vitae are his mixed martial arts exploits; he carries a 6-0 record, six finishes, King of the Cage Canada’s 145-pound title and now a berth in Sengoku’s featherweight tournament. However, the 25-year-old prospect splits his time between the gym and the lab, as he’s currently pursuing his doctorate in biochemistry at the University of Ottawa.

“I actually originally wanted to be a history teacher,” Denis says with a laugh. “When I realized I needed to pick a career, I ended up picking up a book on The Big Bang and thought, ‘Yeah, science is awesome.’” 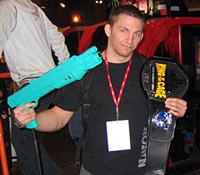 Photo Courtesy of Nick Denis
Zombie killer Nick Denis is
set for his Sengoku debut.
His honors and graduate work largely concentrate on protein ubiquitination. Now as a doctoral candidate, he focuses on the proprotein convertase subtilisin/kexin type 9, or PSCK9 gene, which encodes an enzyme that regulates cholesterol and formatively impacts cardiovascular health. Many graduate students bemoan their work and stress levels when they have only a single focus, yet Denis seems wholly unfazed by juggling academic and pugilistic rigors.

“I wake up, I go to work at the lab at 9:30 and check out some MMA Web sites,” he says, his grin somehow audible through the phone. “Then I’ll go to the gym to train for 60 to 90 minutes, go back to the lab, finish up and then go back to the gym."

His vocal non-chalance is striking. I enquire as to whether or not he’s as polymathic as it appears and if all of life’s niches come so easily to him. Like his grin, I can hear his shoulder shrugging, as well, as he tells me simply that “some things come easy” and credits his brother, Joel, four years his elder, for making him so competitive and driven.

Despite his scientific pursuits, which have already stamped his name on a stack of peer-reviewed journal articles, Denis remains adamant that MMA takes precedence over PSCK9.

“Fighting is definitely my number one. One of my advisors told me, ‘You can’t use science to pay for fighting.’ Well, yeah,” he muses.

Sengoku’s featherweight tournament comes not a second too soon for the scrapper-cum-scientist. It has been eight months since his first-round plastering of Josh Kyrejto, the win which was supposed to grease the wheels for his transition from the national-level of Canada to international competition. In September, Denis signed with flagging Pro Elite but had no illusions about the significance of the signing.

“I’m a fan, too, so when Pro Elite signed me, I knew that they weren’t going to be around much longer,” he says. “I was hoping to get in maybe one, two fights tops before they folded. It was disappointing it didn’t happen that way, but after they went under, with so many organizations having featherweight tournaments, I knew I’d get a fight somewhere.”

While Dream and the upstart Bellator Fighting Championships expressed interest in having Denis in their respective featherweight brackets, it was ultimately World Victory Road and Sengoku who inked him, making Denis one of the many international prospects on the cusp of prominence to populate the tournament. When I ask the ever-trite question of who he’d ideally like to face, Denis naturally namedrops tournament favorites Hatsu Hioki, Marlon Sandro and L.C. Davis. However, in order to rub elbows and trade punches with any of the tournament’s top talents, the Ronin MMA product will first need to nix 21-year-old sharpshooter Seiya Kawahara in a matter of days.

“Me and my team, we watched his fights together. Without being too specific, we did formulate a gameplan,” he says.

Though he dabbled in tae kwon do and karate as a youth, “The Ninja of Love” is very much a modern MMA product in the evenness of his skill set. However, Denis has made his mark thus far as a patient counterstriker, adroitly sprawling and brawling and using his right hand and clinch knees to earn his unblemished mark. In the ultra-offensive Kawahara, whom Pancrase officials earnestly view as the promotion’s next golden child, Denis meets the first opponent of his young career who surpasses his own striking artillery. When I press him as to whether or not he will opt to stand and trade with Kawahara, who hasn’t been as quick to mature on the ground as he has on the feet, Denis offers some points of style but will not explicitly divulge anything.

“When he gets taken down, he doesn’t try and submit anybody; he just tries to stand up and give up his back,” he says. “Instead of being technical, he just tries to bridge strong and scramble. But, I don’t necessarily have to take him down. I wouldn’t mind making my mark with an exciting and explosive stand-up fight.”

Preparation for the Ottawan goes beyond sparring, rolling and film study. Never having been further than six hours removed from the Eastern Time zone and never having fought outside of Canada, let alone half way around the world, Denis left the Great White North on March 12 to ensure he had a full week in Japan to acclimate before squaring off with Kawahara. He has also watched two Japanese zombie films, “Wild Zero” and “Versus,” just in case.

The strategic aspect of the sport clearly excites Denis. Perhaps it’s no great wonder, as research and experimentation are seemingly the most natural points where MMA and biochemistry intersect. Just as he attributes his drive for success to his brother, he sees his preoccupation with pondering hypotheticals and precision planning for contingencies as a familial influence, as well.

“I’m just a clone of my dad, really. He’s the kind of guy who makes to-do lists and notes to himself, notes like, ‘Make a note for tomorrow,’” he says, joking of his father, John, a retired taxi driver.

This adoration of lateral thinking stimulates Denis’ simultaneous love for protein coding and prizefighting. It’s also what stokes his fiery fanaticism with the living dead.

“For me, I think it’s about the facts of survival. I love seeing how people plan to survive in zombie movies,” he says. “It’s the ultimate situation. No location is ideal for fighting zombies: short range, long range, it doesn’t matter. Everything depends on your surroundings.”

I decide to indulge Denis, asking him what exactly one should do in the event of an undead apocalypse. I’m met instantaneously with a battery of survival bullet points.

“First thing, you have to know your location; you have to be familiar,” Denis says. “Second, you need to fill up everything with water where you are: sinks, tubs, whatever. You don’t know when the water is going to get shut off.”

He continues with tactics: women should tie up their hair to avoid being grabbed; avoid driving, but if you must, ride a dirt bike or something that can go off road; choose weapons that are light, sustainable and powerful, like an aluminum bat. He implores that lab goggles be worn if possible when fighting zombies, quickly pointing out that contact with the eyes is the surest way to spread a virus.

During this engrossing and evangelical explanation, Denis’ girlfriend, Alyssa, a psychology undergrad at the University of Ottawa, laughs in the background. I wonder to myself how many times she’s heard this sermon on survival. I joke to him that he won’t be able to become acquainted enough with his Japanese surroundings in just a week to adequately ward off an international zombie attack, to which he mournfully agrees.

“But if you win, they have to keep bringing you back,” I add. “If you win the whole tournament, that’s one more place you’d be safe against the zombie invasion.”

“Good point,” he says, “because, really, I fight as a platform, to educate and defend against the zombie apocalypse.”

And he’s only half kidding.