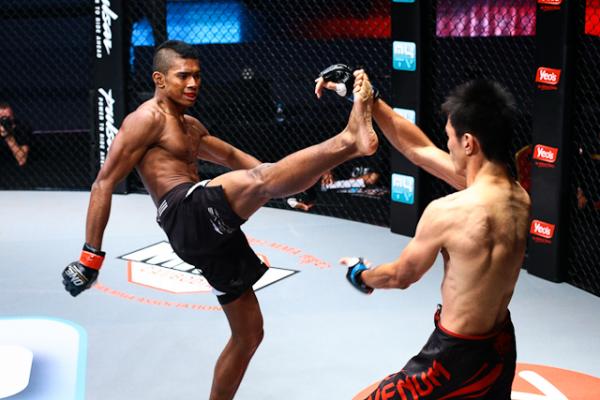 Amir Khan may have to put his MMA pursuits on hold soon. | Photo Courtesy: One FC


Amir Khan at 19 is the youngest martial artist to successfully try out for the Evolve MMA Fight Team; he is the youngest fighter scheduled to compete at One Fighting Championship 22 “Battle of Lions” on Friday at Singapore Indoor Stadium in Kallang, Singapore; and he has accomplished it all while living and competing with Tourette’s Syndrome.

Not to be confused with the former boxing champion with the same name, Khan grew up in Singapore and learned the martial arts. He studied tae kwon do while in elementary school and eventually transitioned to muay Thai as a teen-ager.

The National Institute of Neurological Disorders and Stroke defines Tourette’s syndrome as “a neurological disorder characterized by repetitive, stereotyped, involuntary movements and vocalizations called tics.” Some of those symptoms include small things such as eye blinking, head and shoulder jerking, sniffing and grimacing, along with complex motor tics like hopping, jumping, punching one’s self in the face and the most well-known of the symptoms: vocal tics. These can be anything from barking, snorting and throat clearing to repeating others’ words or shouting curse words.

According to the NINDS, the worst symptoms are usually exhibited during the early teen years. However, that is the very age at which Khan began to seriously train and excel in martial arts. His condition did not hold him back. He fought and won his first muay Thai fight in Thailand at 14, winning via knockout against a local fighter. Khan went on to win a muay Thai championship in New Bangla Stadium and another muay Thai belt in Singapore. It should come as little surprise then that he does not feel disadvantaged by Tourette’s.

“It has never affected me in my career, nor has it affected [me] in my training,” Khan told Sherdog.com. “In fact, I believe that it might be a slight advantage because my opponents can’t really read my movements.”

Other famous athletes with Tourette’s include United States men’s national soccer team goalie Tim Howard and Olympic swimmer Anthony Ervin. They, too, feel the disorder provides them with certain advantages. Howard claims Tourette’s gives him “abnormally rapid reflexes,” and Ervin thinks it has made him faster “most of the time.”

“To a certain extent, I do believe that it is true,” Khan said. “However, I also believe that you have to train hard every day; it’s the only real way you’re really going to get better.”

When Khan was 16, he became interested in mixed martial arts and decided to move to the United States with his father, primarily to pursue training and a career in MMA. He attended Loyola College, where he also picked up golf. True to form, he excelled at that sport, as well, playing on behalf on his school.

“Yes, I was training hard to turn pro at golfing once upon a time, but my true passion wasn’t really playing golf,” Khan said. “It was and is competing in MMA.”

While he was in the U.S., he trained in Brazilian jiu-jitsu and earned his blue belt under Donny Aaron -- a Relson Gracie protege. He took his first amateur fight just a month after his 18th birthday and won by unanimous decision. Khan remained undefeated as an amateur (4-0) and attributes his success to his early training.

“My experience in muay Thai definitely helped me a lot during my first-ever MMA fight because I wasn’t as nervous as I was when I first competed in muay Thai,” he said. “Because of that, I was able to remain a lot more focused on my game plan.”

Earlier this year, Khan turned his eyes back home, as the MMA scene in Singapore continued to heat up.

“MMA wasn’t big in Asia when I left, not like it is now, especially ever since Evolve MMA opened its doors and with One FC being headquartered here in Singapore,” he said. “Evolve MMA was -- and is still -- creating a lot of buzz in Asia, and I heard it from a friend that it has the largest collection of world champions anywhere on the planet. That really sparked my interest, and I decided to try out for the prestigious Evolve Fight Team.”

With that, Khan returned to his homeland to take the next step in his MMA career, tackling the rigorous and high-level tryout process required to become a part of the Evolve Fight Team.

“To be honest, it was tough and a little nerve-racking training alongside so many world champions such as Shinya Aoki, Ben Askren, Namsaknoi Yudthagarngamtorn, Leandro Ataides and so many more,” he said. “However, I managed to calm myself down, focus on the goal at hand and train hard, and in the end, I was invited by [Evolve MMA founder] Chatri Sityodtong to be a part of the Evolve Fight Team. That was really a dream-come-true moment for me, and I was really very honored and happy.”

Khan suffered his first loss in his professional debut -- a first-round ankle lock submission to Cody James at a Global Fighting Alliance event in February -- but rebounded against a more experienced fighter in Jian Kai Chee, scoring a spectacular knockout in his first One Fighting Championship appearance some seven months later. While his fight career remains front and center, Khan must also deal with the rule of law in his homeland. All Singaporean males must spend two years in the military and are generally drafted between the ages of 18 and 20. Khan turns 20 this week, so he can expect to be called upon to fulfill his duty soon.

For now, he can focus on the task at hand. Khan will meet Pakistani prospect Waqar Umar at One FC 22, and he sounds like a man who has the utmost confidence in his preparation.

“Ever since I was invited to be a part of the Evolve Fight Team at Evolve MMA, I feel that my abilities have skyrocketed,” Khan said. “I learn and train with some of the very best that the sport has to offer on a daily basis. Here we have world champions in muay Thai, boxing, Brazilian jiu-jitsu, wrestling and MMA, and that has prepared me for anything that my opponent has planned for me. I feel really confident for this fight, and I’m prepared to show a better version of myself.”