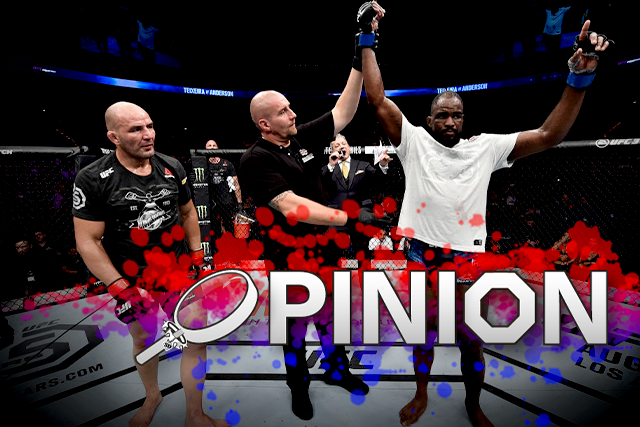 On a few rare Saturdays every year, MMA fans are presented with an intriguing choice: An Ultimate Fighting Championship and Bellator MMA event are on at the same time. Which one should they watch? It's usually a difficult choice, often resulting in switching between the two broadcasts.

But for the first time since the top two MMA promotions have gone head-to-head, the decision is more straightforward and one-sided than a Valentina Shevchenko title defense. Bellator 268 is so much better than UFC Fight Night 195 that one can be forgiven for thinking that Bellator is head-and-shoulders above the UFC, not the other way around.

First, let's get the obvious out of the way. Yes, the UFC has more overall talent than Bellator does. Yes, they have more of the world's elite fighters. Considering that the UFC makes about 20 times the revenue that Bellator does, they had better. And while Bellator pays its fighters 45% of its revenue while UFC gives them a pathetic 16%, this only partially alleviates that reality. However, that does not mean that the UFC is better in every weight class nor that each of its cards is superior. There are several reasons for this. For one, there is such an explosion of MMA talent that no single organization can hope to have every top fighter, or even half of them. UFC stars Sage Northcutt, Eddie Alvarez and Demetrious Johnson, two of them world champions and one an all-time legend, found that out the hard way in One Championship. For another, Bellator allows fighters to have their own in-cage sponsors, a highly lucrative revenue stream the UFC has closed off to its roster. This has allowed top Bellator fighters to make as much or more than they would in the UFC despite the company’s revenue being far less. It has prompted former elite UFC contenders like Gegard Mousasi, Corey Anderson, Ryan Bader, Phil Davis, Sergio Pettis and many others to switch companies.

Most significant, however, is the UFC's absurd number of yearly events, stretching itself ridiculously thin. With 43 UFC cards scheduled this year, many end up very weak, a problem I've written about before. At only 17 events in 2021, Bellator can put out better cards despite less overall talent, since there are far fewer slots to fill. And nowhere is that more glaring than on Oct. 16, where from both a skill and star power perspective, Bellator’s offering absolutely crushes a hapless UFC event. Now, when comparing two cards, no one cares if the third prelim on one is slightly better or worse than the other. Rather, it comes down to three factors, in descending order: the main event, the co-main, and the rest of the main card.

The main events of both shows have suffered last-second changes. Originally, Bellator light heavyweight champion Vadim Nemkov was set to defend his title against legendary UFC knockout artist Anthony Johnson in what would have been a tremendous main event. Sadly, Johnson pulled out with an undisclosed illness and was replaced by Julius Anglickas. Meanwhile, UFC Fight Night 195 was originally headlined by returning former bantamweight champion Miesha Tate facing contender Ketlen Vieira. Tate had to withdraw due to COVID-19 and the new main event became Holly Holm versus Norma Dumont. Holm then suffered a knee injury and was replaced on less than two weeks’ notice by Aspen Ladd.

The difference is that Bellator still has a good main event. Nemkov is the promotion’s champion and arguably the best light heavyweight on the planet, a sensational fighter who utterly decimated solid contenders like Liam McGeary, Rafael Carvalho and Philipe Lins before scoring one of the most impressive knockouts of the year over two-division champ Ryan Bader, then solidifying his status with a second decision win over perennial elite light heavyweight and former Bellator champ Phil Davis. Like his mentor Fedor Emelianenko was at heavyweight, Nemkov is not only one of the very best grapplers at 205 but also one of its top strikers. His only significant weakness is five-round cardio. While he looked stellar for the first three rounds against Davis last time out, taking each stanza easily, he was badly tired for the last two rounds, which he dropped. Anglickas, meanwhile, is not an elite fighter but he is certainly a very good, improving one. A former Legacy Fighting Alliance champion, he hasn't lost since his second professional outing back in 2016 and sits at 10-1 right now. Despite winning via stoppage when he appeared on Dana White's Contender Series in 2019, the UFC didn't offer him a contract, and Anglickas has looked better than ever in Bellator, including a victory over previously unbeaten Alex Polizzi, who is also a former LFA 205-pound champion.

By contrast, the UFC's main event may be a new low for the modern era, especially given the circumstances of Ladd being a last-second replacement. Dumont has proven herself a competent UFC fighter, but I'm guessing she was shocked as anyone when she was offered a main event. Dumont entered the UFC having won a close decision over journeywoman Mariana Morais and was then promptly knocked out by a Megan Anderson right hand in the first round in her debut. Despite being a massive underdog, she beat Ashlee Evans-Smith at bantamweight easily in her next outing. However, Evans-Smith is barely even in the UFC, having lost four of her last five fights, and Dumont missed weight by a colossal 3.5 pounds. After that, Dumont went up to featherweight and won a split decision over Felicia Spencer in a match that underscored how weak that division is. Suddenly, she finds herself in a main event? Many people criticized Jessica Eye vs. Cynthia Calvillo headlining a UFC fight card in 2020, but Eye was coming off challenging for the flyweight crown and Calvillo had been a Top 10 strawweight, by far the most talent-rich division in WMMA. They were each at least two levels higher in terms of skill and accomplishment than Dumont presently is.

Ladd, meanwhile, was considered a serious bantamweight contender in 2019. However, in her first main event, against Germaine de Randamie in July of that year, it took the Dutch striker just 16 seconds to render Ladd unconscious. Ladd has fought just once since, a fine knockout victory over Yana Kunitskaya in December of 2019. Since then, she has suffered from a string of injuries, including a torn ACL and MCL. She was scheduled to fight Macy Chiasson at bantamweight on Oct. 2, but after missing weight and looking horrendous on the scales, she was pulled entirely. It's questionable whether Ladd will ever be a bantamweight contender since she has repeatedly struggled to make 135 pounds.

While certainly a more accomplished fighter than Dumont, there are plenty of question marks surrounding Ladd, and the UFC allowing her to compete only two weeks after such a severe, debilitating weight cut is the height of irresponsibility. For the sake of marginally bolstering an awful card, they are endangering a fighter's health.

Incidentally, Ladd's previous main event against de Randamie really shows how much the level of UFC cards has fallen in just two years. At the time, it was considered perhaps the weakest UFC main event of 2019, yet it is vastly better than this weekend’s offering.

Needless to say, Bellator's main event far surpasses the UFC's wretched one. However, not content with offering perhaps its worst main event on paper in the modern era, the UFC follows it up with one of its weakest co-main events. Andrei Arlovski is a legend, but at 42, he is reduced to cautious point fighting, still smart and talented enough to barely win decisions over the likes of Chase Sherman and even Tanner Boser, but being demolished by any serious contender, whether Jairzinho Rozenstruik or Tom Aspinall. Carlos Felipe, meanwhile, has about as much business in the co-main as Dumont has in the main. While Dumont has at least proven herself a competent fighter on the UFC level, Felipe’s 3-1 UFC record could easily be 2-2 or even 1-3. The vast majority of MMA media and fans alike had Justin Tafa defeating Felipe in their fight, which Felipe won by split decision. Felipe followed that up with another split decision, this time against Jake Collier, and while this one wasn't a borderline robbery, it certainly could have gone the other way, as a slight majority of fans scored it for Collier.

In a complete contrast, Bellator 268 has a phenomenal co-main that surpasses their main event, and is arguably their best ever. Elite light heavyweights clash when Corey Anderson faces Bader. Both men may be as good as any light heavyweight in the UFC. The upcoming title bout at UFC 267 will feature Jan Blachowicz against Glover Teixeira, both of whom Anderson fought. Anderson is 1-1 against Blachowicz, brutalizing him over 15 minutes to the point where two cageside judges had it 30-25 for him, but being knocked out in the rematch when he got too comfortable on the feet. Anderson also utterly thrashed Teixeira in 2018. People thought this meant Teixeira was washed up, but right after that defeat, he went on a five-fight winning streak culminating in another crack at UFC gold. Frankly, Bellator 268's co-main is better than UFC 267's main event, and the degree to which it surpasses UFC Fight Night 195's co-main resembles the difference between a major organization's main card and a small-time regional promotion's prelim.

The rest of the main card may not be as resounding and stark an advantage for Bellator, but they clearly offer the better product. Benson Henderson vs. Brent Primus is a fun match-up between accomplished, highly talented veterans, one a former UFC lightweight champion and the other a former Bellator lightweight champion. Henry Corrales vs. Vladyslav Parubchenko should an intriguing striker vs. grappler matchup between two tough, skilled fighters, even if neither is a top contender. Lastly, Karl Albrektsson vs. Dovletdzhan Yagshimuradov is another high-quality light heavyweight battle. Albrektsson holds an early split decision victory over current champ Nemkov and more recently decisively defeated his older brother Viktor, a very good fighter in his own right. Against 12 victories, his three losses have all come to elite competition, having been beaten by current Bellator heavyweight champion Valentin Moldavsky and top UFC contender Jiri Prochazka in Rizin Fighting Federation before being stopped by Phil Davis more recently. Meanwhile, longtime Absolute Championship Akhmat champion Dovletdzhan Yagshimuradov was so highly regarded that he was only a small underdog against Anderson in the first round of Bellator's light heavyweight grand prix.

There is much less to look forward to on the rest of UFC's main card. Jim Miller is a beloved figure, but he is 38 and dropped three of his last four outings. He faces Erick Gonzales, who is making his UFC debut, and recently lost to Humberto Bandenay, his last serious opponent. It's an attempt to give Miller a winnable fight, but not especially interesting. Manon Fiorot and Mayra Bueno Silva are both skilled strikers and flyweight prospects who love to trade leather, but neither is close to being a contender at present. Lastly, Jordan Wright-Julian Marquez may be a very fun scrap, but neither man is anywhere near contention, and it wasn't long ago that people wondered whether Wright deserved to be in the UFC at all.

While no one can predict how exciting the fights will be, from the standpoint of skill and star power, the choice for fans on Oct. 16 is very clear. Bellator 268 defeats UFC Fight Night via vicious first-round knockout.

« Previous Luke Rockhold Withdraws from UFC 268 Due to Herniated Disc in Back Next Winless in Last Seven Fights, Sam Alvey Meets Ian Heinisch at UFC Event on Feb. 5 »