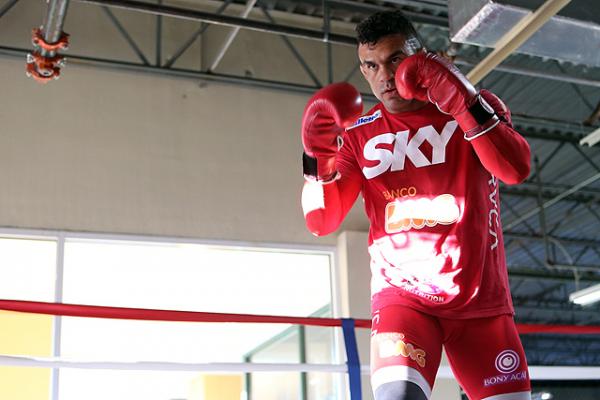 
Can the Ultimate Fighting Championship accept that the future is now with Ronda Rousey and Chris Weidman or will the organization continue to be obsessed with a past that lingered over UFC 175 like a dark cloud?

International Fight Week was supposed to be the UFC’s crown jewel presentation. World Wrestling Entertainment has week-long festivities leading up to Wrestlemania; the NFL has an extended celebration, including media day, preceding the Super Bowl; and by all accounts, the UFC had a pleasant business experience with International Fight Week despite the presence of empty seats at UFC 175 on Saturday and “The Ultimate Fighter 19” Finale on Sunday at the Mandalay Bay Events Center in Las Vegas.

However, there seemed to be some unresolved issues surrounding the biggest UFC event of the summer. While Rousey and Weidman cemented their status as true aces in the UFC, there was just as much attention regarding the fighters who were not on the card, namely Vitor Belfort and Chael Sonnen. At a fan Q&A session, a kid asked UFC President Dana White when Sonnen was going to return. The never-say-never White maintained that Sonnen was keeping a low profile but would remain under UFC contract. The fans in Las Vegas wanted to see Sonnen return, despite the news that he was flagged for HGH and EPO the week before on a random Nevada Athletic Commission drug test. This came on top of Sonnen getting busted for two other drugs in a previous NAC random drug test.

Sonnen’s two drug test failures with the Nevada Athletic Commission capped off one of the most turbulent periods in the history of UFC matchmaking. Go back to November. Labeled by many fans as the evil poster boy for testosterone users in the UFC, Belfort beat Dan Henderson in Brazil to become the No. 1 contender for Weidman’s middleweight title. Weidman-Belfort was booked for UFC 173. Unlike American UFC fighters Henderson and Sonnen, both of whom used testosterone replacement therapy, Belfort, the foreigner, drew the monster heat for using testosterone. The hypocrisy was predictable but alarming. Belfort was going along with the protocols just like the rest of the UFC’s fighters, but the fact that so many people loathed his rise back to the top meant that a generally sleepy sports media suddenly had to pay attention.

The pot soon started to boil over regarding testosterone usage in MMA. While Josh Gross and Mike Fish were busy writing their informative ESPN piece on 15 fighters receiving therapeutic use exemptions to use testosterone, Belfort was having problems getting his license to fight in Nevada. Months passed before it was revealed, by UFC commentator Joe Rogan no less, and later confirmed by Belfort’s camp that the Brazilian had elevated levels of testosterone that were off the charts. The Nevada Athletic Commission quickly changed course on the issue of granting therapeutic use exemptions for testosterone replacement therapy. Belfort found himself in a tough predicament and claimed he needed several months to adjust his body to no longer using testosterone. As we know now, Sonnen found himself in a similar predicament.

As Belfort’s latest meltdown transpired, Weidman suffered a knee injury, and his fight was pushed back to UFC 175. With Belfort unable to get a license to compete in Nevada, the highly respectable Lyoto Machida stepped in to replace him. 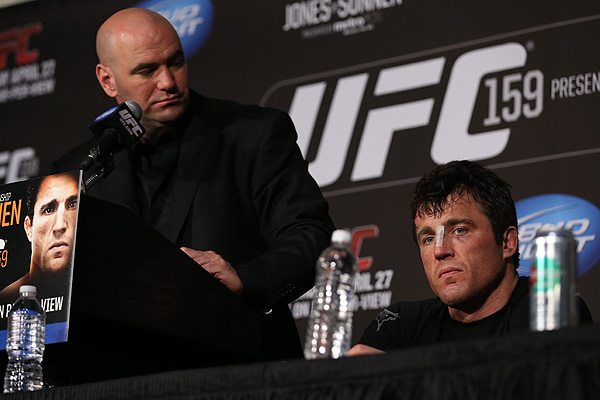 Photo: D. Mandel/Sherdog.com
Some want Sonnen back.
Not to be beaten in the testosterone circus, Sonnen and Silva were at odds with each other on “The Ultimate Fighter: Brazil” Season 3, during which the polarizing American wrestler somehow found himself in the role of baby face. However, Silva, the Brazilian MMA legend, landed in a rather awkward spot after the reality show. He was supposed to meet Sonnen at UFC 175, but he was not listed on any Nevada Athletic Commission meeting agendas to apply for a license as a fighter over the age of 35. In May, NAC Executive Director Bob Bennett revealed that Silva’s medical paperwork was incomplete, and the UFC announced that the fight with Sonnen was off.

Sonnen went on television to claim “The Axe Murderer” had run away from taking a random NAC blood and urine drug test. This story was later corroborated by Bennett and the drug collector at the NAC’s June meeting. Silva, along with representative Ross Goodman, admitted he was using diuretics at the time of the random drug test.

With Silva pulled from the card, Sonnen needed an opponent. In stepped Belfort, still the No. 1 contender to Weidman’s middleweight title. Sonnen then failed his first random NAC drug test, resulting in his fight with Belfort being cancelled. Sonnen retired from fighting a day after being interviewed on television and trying to explain what happened with the test. He later failed another test.

How many body blows could UFC 175 absorb? The pressure put on Weidman and Rousey was enormous, and they delivered in spades. The future is here for the UFC, and it is now. Moving on from the likes of Anderson Silva, Georges St. Pierre, Chael Sonnen and Wanderlei Silva is tough -- really tough. When you are running as many shows as the UFC, you need all the star power you can get. In the months of July and August, the UFC has 10 events in eight weeks.

The testosterone plague that hovered over the UFC during the last eight months proved to be such an ugly, divisive issue. The public relations effort was terrible. The optics looked awful. It made the sport appear as dirty as horse racing. All of the negativity surrounding everything that transpired tarnished the UFC brand, which is why what happened at UFC 175 represents a chance for the Ultimate Fighting Championship to hit the reset button and move forward in making new stars. Move on from the past and shift away from fighters who automatically remind fans of doping and cheating. The UFC still has that opportunity.

The pervasiveness of the testosterone issue in professional sports was on full display at UFC 175, where White was pictured with disgraced New York Yankees third baseman Alex Rodriguez at the Mandalay Bay. According to the new booked “Blood Sport,” Rodriguez was allegedly granted a therapeutic use exemption for testosterone usage in 2007 -- the year he won the Most Valuable Player award in the American League.

Everywhere Rodriguez goes, he is viewed by many as a poster boy for doping in baseball and all sports. The same goes for cyclist Lance Armstrong. You can now throw guys like Sonnen and Belfort into the same category. Their mere existence in the spotlight will always raise the issue of drug usage in MMA; it is toxic from a public relations standpoint. However, Sonnen and Belfort are dynamic fight personalities and the UFC needs to fulfill its appetite for star power by keeping those guys around. It is a mistake I think the UFC will regret in the long run if Belfort is granted a title shot and wins the belt.

As for Sonnen, it is clear that the UFC and Fox Sports have a great deal of appreciation for the man, inside and outside the cage. Fox Sports 1 Vice President George Greenberg was asked last week in a Sirius XM Fight Club interview if there was a scenario in which Sonnen could return to Fox Sports to cover the UFC. He did not close the door completely.

The UFC has a choice to make: Does it give into its temptation to rely upon Sonnen and Belfort and accept the dirty laundry that comes with both men, or does it make a clean break from the past and move forward with a fresh agenda that is not tarnished by the image of doping? After everything that led up to what happened at UFC 175, the company has a chance to push the doping narrative aside and spend its energy promoting fights fans want to see. Will the UFC make the right decision?