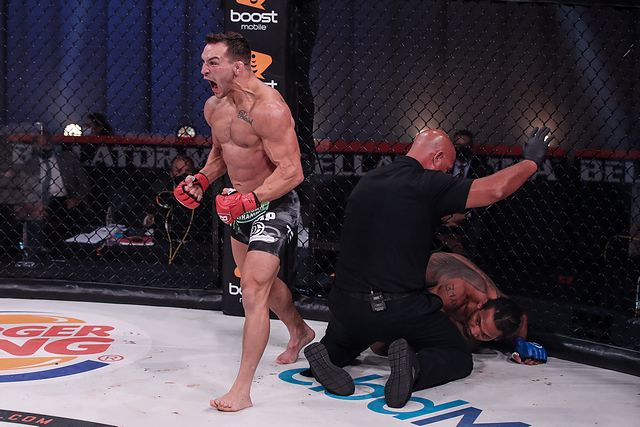 
The Ultimate Fighting Championship consistently maintains that it is the premier MMA promotion in the world, its fighters the very best that the world has to offer, and the rest of the sport just unnamed “other organizations” or more commonly, “regionals.” And that's perfectly fine. The UFC is a business and should advertise itself and moreover, it certainly does have a better collection of talent than any other single promotion.

However, I'm consistently astounded at how many MMA fans are willing to parrot UFC propaganda like a group of unpaid interns. Oftentimes, these same fans consider themselves enlightened or “hardcore.” Sometimes, these fans will even lament the UFC’s increasingly weak cards, yet have no problems mindlessly repeating a narrative that would sound ridiculous coming from any UFC employee, let alone a fan of the sport as a whole.

Take, for instance, the recent signing of UFC light heavyweight contender Corey Anderson by Bellator MMA. Whichever way you slice it, this was a huge deal. Anderson was the No. 4 light heavyweight in the UFC’s own rankings and is a ridiculously talented mixed martial artist only held back from championship-level greatness by a weak chin.

In the last two years, Anderson absolutely dominated all-time great Glover Teixeira, who has recently shown he is far from washed-up, defeated a longtime Top 10 opponent in Ilir Latifi—a fight in which Anderson’s chin held up—and then demolished the massively hyped Johnny Walker, who likely would have challenged for the world title had he won. Alas, Anderson's chin again failed him against Jan Blachowicz, a man he had dominated in 2015 when he was just 5-1 and 25 years old, while the Pole was seven years older and a seasoned 18-4 veteran.

Anderson’s world-class talent should be obvious, yet one would never guess any of this reading the Twitter replies greeting Ariel Helwani's announcement of the signing. Countless replies mocked Anderson for being a loser looking for a payday and easy way out, as if there is anything easy about fighting elite 205 pounders like Ryan Bader, Phil Davis and Vadim Nemkov, the first two of which had tremendous success in the UFC as well. Many claimed that Blachowicz had “beaten him into Bellator,” as if coming back from knockout losses was anything new for Anderson, or he wouldn't be roughly even money against the Pole in a rubber match. It was all pathetic and embarrassing, especially since it's rare for any UFC card outside of PPVs to feature more than a single fighter on the same skill level as Anderson, and sometimes fewer than that.

There was similar disrespect towards Bellator two-division champ Patricio Freire last year when he mentioned that while most fans didn't give him a chance, he thought he could beat his fellow Brazilian Jose Aldo at featherweight, or wanted a crack at Max Holloway. Countless fans chortled at the very concept and claimed Holloway would beat Freire with one hand tied behind his back. Many dismissed the 5-foot-7 “Pitbull” for being too short, yet who ended up shutting down Aldo before going 2-0 against Holloway? Alexander Volkanovski, a fighter who is the same height as Pitbull and possesses many similar skills.

This is not to say that “Pitbull” would necessarily beat either Aldo or Holloway, only that it can't be immediately dismissed out of hand. It's as if there was something intrinsically magical about the UFC cage and canvas that makes those who compete on it far more skilled and meaningful than if they competed in any other cage adorned with a different logo.

For examples of the former, look at how Sage Northcutt and Eddie Alvarez did after leaving the UFC for One Championship. Despite UFC President Dana White's disgraceful, insulting comments about Northcutt after he didn't re-sign with the organization, claiming he was a hype-job who shouldn't even be a fighter, the guy was an impressive 6-2 in the UFC, including being part of the co-main event for UFC Fight Night 133, which he won in spectacular, dominant fashion. Yet in his One Championship debut, Northcutt was knocked out in 29 seconds by unheralded, but very skilled foe Cosmo Alexandre, a stoppage so that brutal that his face required an eight-hour surgery and hiatus from the sport. If Sage Northcutt sucks, then, according to White's logic, so does the UFC as a whole.

Alvarez went from being a Top 5 lightweight with a spectacular knockout of Justin Gaethje and losses only to elite opponents like Dustin Poirier and Conor McGregor, to being steamrolled by the largely unknown Timofey Nastyukhin. Did Alvarez just get old overnight, or could it be that UFC fighters are simply overrated by virtue of their name recognition, while fighters outside the organization are underrated?

Interestingly, Alvarez was once an example of the opposite phenomenon. Expectations were modest when he entered the UFC, as most felt he had gone 0-2 against Michael Chandler in Bellator. And yet, after edging out Gilbert Melendez as a small +125 underdog, he edged out Pettis as a +300 underdog and then knocked out Rafael dos Anjos as another considerable underdog at roughly +250.

Since much of the ire for non-UFC organizations goes towards Bellator, let's look at how their high-profile signings have gone. Rory MacDonald was one of the four best welterweights in the UFC, the last person to clearly beat then-welterweight kingpin Tyron Woodley and still only 27 years old when he joined the rival organization, and he had a disappointing run. Many expected him to be a dominant welterweight champion for years to come, but instead, he had a draw with 41-year-old Jon Fitch, barely edged out Neiman Gracie in a close five-rounder, and then was soundly defeated by Douglas Lima in their rematch.

Gegard Mousasi has done better, but fresh off an impressive five-fight winning streak over big names in the UFC, four of them finishes, he barely managed to defeat Alexander Shlemenko and then lost a close fight against Rafael Lovato Jr. despite being a -400 favorite. His biggest, most impressive victory in Bellator was over the aforementioned MacDonald.

Benson Henderson might be the biggest bust, though. Only two years removed from being UFC lightweight champion, and fresh off a decision victory over Jorge Masvidal that most genuinely saw in his favor, Henderson was expected to do big things in Bellator. Instead, he was utterly dominated from bell to bell by Andrey Koreshkov despite being a considerable -215 favorite, was dominated by Chandler twice—despite closing in the live +150 range for both—and was beaten by Patricky Freire as a -250 favorite. In fact, Henderson's lone impressive victory was over Myles Jury, another recent UFC exile who has underperformed relative to expectations.

Out of all of UFC signings, the only martial artist who has matched or exceeded expectations in Bellator has been Bader. (It's a little early to say anything about Sergio Pettis after two fights.) Again, is this because all these signings magically got worse when not fighting on top of a UFC logo, or is it because the competition in Bellator was a lot tougher and better than it was given credit for?

On the flip side, fighters from other organizations coming into the UFC typically do better than expected. I mentioned Alvarez arriving from Bellator already. More recently, we've seen Jiri Prochazka come in as a +150 underdog against Top 5 light heavyweight Volkan Oezdemir and destroy him in a manner no one else has. Prior to the fight, numerous people were discounting Prochazka as a guy who had beaten a bunch of has-beens and low-rate regional competition in Rizin FF, and would be exposed by the elite UFC talent Oezdemir. Instead, it was Prochazka who did the exposing.

Amusingly, Oezdemir was once an example of the same phenomenon. After washing out of Bellator after being thoroughly dominated by wrestler Kelly Anundson, he looked awful in barely surviving against inexperienced prospect Alikhan Vakhaev in Russia. He came into the UFC and after a controversial decision win over Ovince St. Preux, he then trounced Misha Cirkunov and Jimi Manuwa in short order, as a +300 and +150 underdog respectively, before challenging Daniel Cormier for the title.

No one is denying that Oezdemir has improved as a mixed martial artist over these fights. But maybe, just maybe, Anundson is a hell of a lot better than people think, and could hold his own against St. Preux, Cirkunov, or Manuwa. Only, unlike Oezdemir, he never got a chance to show up the UFC fans sneering at him.

I could go on and on with more examples, but the point should be clear. Corey Anderson is an excellent, world-class fighter regardless of the logo on which he competes, as are a great many guys and girls who haven't competed in the UFC, and it would be nice if more fans appreciated that.