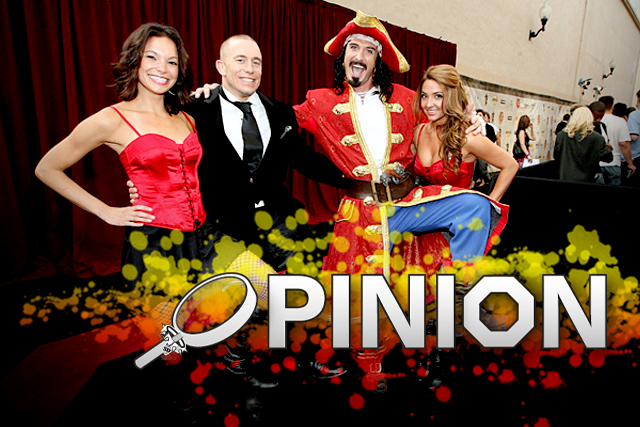 Among both casual and hardcore fans, there is a commonly held belief that a fighter from an impoverished background has an advantage, that the tough guy or girl from “the streets” should beat up a foe with a comfortable middle-class or upper-class upbringing. Intuitively, it makes a certain degree of sense. A poor fighter may have more motivation to succeed, as there is no safety net, and success will mean more for their family. They may be more used to daily struggle or even physical violence, which some people reason should make them tougher in a cage or ring.

And yet, this is pure bullsh*t. We can almost immediately disprove it by looking at the greatest fighters in MMA history. Presumably, if poverty were such an advantage, the all-time best should feature many with poor childhoods. Instead, we see that it is a rarity. Georges St. Pierre grew up in a middle-class home in Montreal, Quebec. Jon Jones grew up comfortably in Rochester, New York, his father a respected pastor. Fedor Emelianenko came from a blue-collar background, with his father a welder and his mother a teacher, and while I can say from first-hand experience that life was tough in Russia during the 90s, Emelianenko was not among the nation's poor. Khabib Nurmagomedov’s early life wasn't glamorous, but neither was he poor. Demetrious Johnson had a normal middle-class background in Washington State. Among the two greatest female fighters, neither Amanda Nunes nor Valentina Shevchenko appear to have especially impoverished backgrounds. From my research, only two all-time legends grew up notably poor, those being Anderson Silva and Jose Aldo.

Interestingly, there is at least one example of an all-time great fighter who came from an upper-class background: B.J. Penn. His family was wealthy and he had no need to fight. And yet, that didn't stop him from being one of the best ever. While not among the all-time greatest, Donald Cerrone was also rich and had no need to even work, let alone fight in a cage, for his bread. And yet, he had a tremendous degree of success and is renowned for his love of fighting anytime anywhere.

Looking at this and many other examples, we can quickly dispel the narrative that better off fighters lack motivation or toughness. No one ever accused St. Pierre, Jones, Emelianenko, Nurmagomedov or any of the others of being soft, and only Jones has occasionally lacked a laser-like focus and tireless work ethic. Furthermore, just because one grew up middle-class or rich doesn't mean their life was easy, or lacked challenges. Fighters can draw inspiration from a variety of sources, whether it's a simple desire to be the world's best martial artist, a chip on their shoulder from being beaten up by bullies as a kid, as St. Pierre did, wanting to make their father proud, as in the case of Nurmagomedov, or a variety of other reasons.

Conversely, we see many fighters from poorer backgrounds who don't possess either toughness or a strong work ethic. David Abbott had many street fights and even spent time in jail for assault prior to fighting in the UFC. He was notorious for quitting in hard fights and having little interest in training, often gassing out quickly. Bob Sapp was in poverty prior to his fighting career and had a difficult life. Yet, rather than possessing more heart and drive, Sapp became a laughing-stock, a muscle-bound goliath who would curl up in the fetal position from a single punch.

A particularly good example of how little wealth or poverty can mean for a fighter is found in boxing. Consider the two legendary Mexican world champions, Erik Morales and Marco Antonio Barrera. Both are among the greatest boxers ever, with ESPN ranking Morales 49th and Barrera 43rd on its list of the 50 best boxers. Both were known for their limitless toughness and resourcefulness in battle. Bitter rivals at featherweight, Barrera also won their head-to-head trilogy 2-1 and it could have easily been 3-0, as his lone loss was a highly controversial split decision. Most consider Barrera to have been slightly better overall, yet Morales grew up very poor while Barrera came from a rich family. It's also interesting to note that Mexican boxing fans overwhelmingly favored Barrera, who was born rich, over his more humble foe. Even when it comes to fan perception, growing up poor didn't help.

Sometimes the application of this narrative doesn’t even make sense. Consider the boxing match between Jake Paul and Nate Robinson. I heard and read many talking heads claim that Paul was a rich, spoiled celebrity who was going to be exposed by a legitimate athlete in Robinson, who presumably wasn't. Never mind that Robinson is himself a celebrity with a lavish lifestyle, one he has been enjoying for the past 16 years, ever since signing a multi-million dollar NBA contract when he was 21. Incidentally, that's around the same age that Paul become wealthy. Nor was there much to suggest that Paul’s upbringing before then in a suburb of Cleveland was significantly better or worse than Robinson’s in Seattle and the San Francisco Bay Area. But hey, it's responsible for Paul closing as a mere -180 favorite, so it was highly profitable for many gamblers.

The next time you hear this silly narrative about a poor upbringing making a fighter more driven or tough, feel free to laugh at it. Great fighters come from an endless variety of backgrounds, and are forged through a variety of forces. It's part of what makes combat sports so compelling.