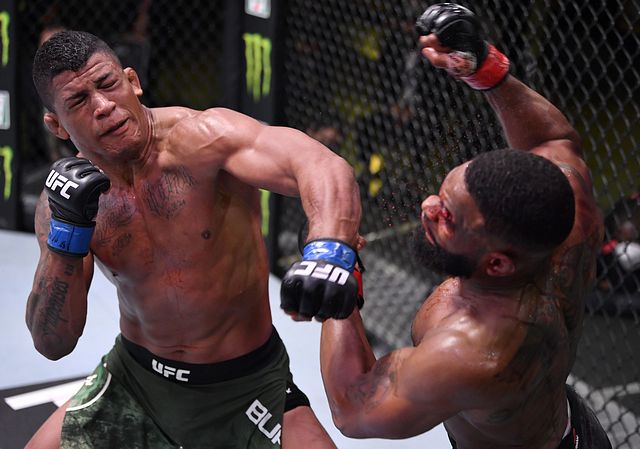 
It may be hard to believe now, but just 15 months and two fights ago, Tyron Woodley was being seriously debated as the greatest welterweight of all time. Countless forum discussions compared him to Georges St. Pierre and wondered who would win a showdown between the two.

Personally, I always rolled my eyes at this, for two reasons. For one, while Woodley would have an excellent chance of beating “GSP”—Johny Hendricks, a stylistically similar but inferior wrestler-puncher, deserved the nod over the Canadian legend—it's irrelevant and unfair to the older fighters. After all, any current lightweight ranked in the world's Top 100 would brutalize Royce Gracie in his prime. Does that mean a fledgling undercard fighter in the Ultimate Fighting Championship or Bellator MMA is greater than the pioneering legend? I would hope not! It would render such discussions largely meaningless, and if we're going on résumé and by how far the fighter exceeded his contemporaries, Woodley isn't even close to the second greatest welterweight ever, a title that belongs to the increasingly overlooked Matt Hughes.

With all that said, Woodley was undeniably great. In a more competitive era than the one over which St. Pierre or Hughes reigned, he handed Kelvin Gastelum his first loss; blasted champion Robbie Lawler to win the title; had two very close, even fights with a fantastic fighter and difficult stylistic matchup in Stephen Thompson; earned a boring but clear victory over one of the greatest grapplers in MMA history in Demian Maia; and then destroyed another unbeaten, dangerous contender in Darren Till. All before losing to a superlative fighter in his own prime in Kamaru Usman.

Moreover, I mentioned Hendricks earlier, who was part of a wave of fighters in the late 2000s that followed a similar style. Namely, they were all high-level credentialed wrestlers with great physical strength who learned solid striking and relied on a deadly cross. Out of the many such fighters, I saw Woodley as the best, most impressive example of this style, with his powerful, technical leg kicks, fine instincts, and the sheer speed and power of his straight right. Woodley never evolved past that style, but for a long time, he didn't need to.

And then, on the other hand, you have Gilbert Burns. While a good fighter, he was never considered a serious contender and for a long time wasn't even ranked. At the same time that Woodley was defending his championship and being talked about as one of the greats, Burns was beating the likes of Olivier Aubin-Mercier and Mike Davis on the prelims.

Hell, it was less than two years ago that Burns was demolished in less than half a round by Dan Hooker, a very good fighter, but certainly no one being mentioned as an all-time great yet. Yes, Burns was depleted at lightweight and yes, Burns has improved since.

Nevertheless, even with a new weight class and improvement, Burns won very close, competitive decisions against Alexey Kunchenko and Gunnar Nelson a mere nine or 10 months ago. Against Kunchenko, after clearly winning the first round, Burns was losing the striking battle in Round 2 before a timely takedown, and was then soundly thrashed in Round 3, as he tried to survive until the final bell. Without that late takedown in Round 2, Burns would have lost that fight.

So how does Burns go from barely outpointing Kunchenko to not just beating, but utterly dominating a great fighter like Tyron Woodley in less than year? Well, here's the dirty little secret: There isn't that much difference between a good, unranked fighter like Kunchenko and a champion like Woodley.

You would never know this from the prevailing narrative, of course. Though he was a longtime champion in the M-1 Global promotion who had never suffered a loss prior to joining the UFC, Kunchenko was mostly seen as just another guy to pad out the card.

Meanwhile, all manner of superlatives were used to describe Woodley. Even gamblers were swept up into this narrative. Woodley opened as a small favorite at around -145 and was consistently bet all the way to -200 despite the warning signs of age and an antiquated style. But all it took was some decline from Woodley, a little more improvement from Burns, and suddenly, the guy who edged Kunchenko is clobbering Woodley.

That's the cruel nature of fighting. No matter how great, no matter how hyped a fighter, they're not nearly as separated from the rank-and-file of their division as the popular narrative claims. While Woodley is the most recent example, there are many other similar cases. Just three weeks ago, Claudia Gadelha fought Angela Hill. Gadelha was seen as a different class of fighter, which explains her being a significant -250 favorite. Gadelha, after all, had arguably handed Joanna Jedrzejczyk her first loss in their initial encounter, even if the judges saw it differently. She had consistently competed in the main or co-main event of various cards, even pay-per-view events, and had a long line of impressive victories over big names.

Hill, meanwhile, had been easily taken down and submitted a little over a year ago by much lower-ranked and seemingly inferior grappler Randa Markos, the same Markos that Gadelha would easily outpoint a year later. Hill had assembled a nice winning streak over lower-ranked opposition and was clearly improving as a mixed martial artist, but let's not overstate this point. Less than three months before facing Gadelha, she won a close, competitive but deserved decision over Konklak Suphisara, an undersized opponent still adjusting to MMA from muay Thai. It was a solid win, but not one associated with a potential Top 5 strawweight.

And yet, what happened? Hill and Gadelha engaged in a very close, tough battle that myself and most others, journalists and fans alike, believed was won by Hill. All it took was Hill fighting a little better and Gadelha a little worse. That's just how close professional fighters are.

There are many, many more examples I'm sure the reader can think of here. But the important point to remember is this: The next time you hear that a less heralded fighter has no business sharing the cage with their more famous, decorated, highly ranked or champion opponent, think long and hard about whether it's true. It might be nothing more than a narrative to be obliterated by the cold, cruel realities of fighting.