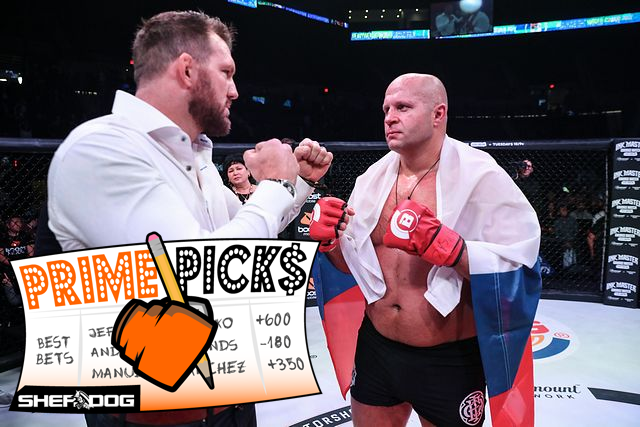 The first Bellator MMA card of the year takes place this Saturday night at The Forum in Inglewood, California, with Bellator 214. The card features the finals of the Bellator Heavyweight Grand Prix between the legendary Fedor Emelianenko and rising pound-for-pound stud Ryan Bader, not to mention the return of highly-touted prospect Aaron Pico and the mixed martial arts debut of former WWE wrestler Jake Hager (aka Jack Swagger). Odds have been released for four of the main card bouts, and I have given a Prime Pick for each bout.

Ryan Bader Inside the Distance (-195)

As much as it would nostalgic to see Emelianenko win the grand prix, I don’t expect him to get by Bader, who has looked absolutely outstanding since joining Bellator. “Darth” has won 11 of his last 12 fights overall and is currently riding a six-fight win streak with a 4-0 record in the Bellator cage. He defeated Phil Davis in his Bellator debut to win the promotion’s light heavyweight belt, defended it against top contender Linton Vassell, then moved up to heavyweight and knocked out Muhammed Lawal in 15 seconds before riding Matt Mitrione to a decision. As good as Bader was as a light heavyweight, he arguably looks even better as a heavyweight, and now he will be taking on arguably the greatest heavyweight of all time in the ultimate test.

His opponent has had a resurgence in the Bellator heavyweight tournament as Emelianenko knocked out former Ultimate Fighting Championship stars Frank Mir and Chael Sonnen to bounce back from a disastrous promotional debut where he got knocked out by Mitrione. He even won the Sherdog Comeback Fighter of the Year award. While that was deserved, you have to remember he was fighting two guys who are notoriously chinny, not to mention at the tail-end of their careers. Emelianenko is now 42-years-old and taking on the younger, more explosive Bader. Sure, “The Last Emperor” has a puncher’s chance as it’s heavyweight MMA, and the Russian has special KO power, but his opponent has looked unstoppable and I don’t expect him to lose this contest with the way he’s been fighting lately. With the bout being scheduled for five rounds, there’s no reason the younger fighter can’t get the finish. I like Bader at -320, but I like him inside the distance at -195 even more here as him getting a TKO win before the final bell is likely.

Though some may be tempted to take a swing on the big odds of underdog Henry Corrales, I believe Pico defeats him in what should be a very exciting featherweight match. As far as I’m concerned, Pico has future champion written all over him. After losing his debut to Zach Freeman in a gigantic upset, the former freestyle wrestler has looked unstoppable, knocking out all four of his opponents in the first round. Only 22 and already a terrific fighter, and he improves every time we see him step into the cage. The sky is the limit for this young man, and I recommend jumping on the hype train while you can. His opponent here, Corrales, has definitely looked good lately, turning his career around with a four-fight win streak after losing three straight bouts to open his Bellator career. However, this looks to be just like Pico’s last fight against Leandro Higo, where it appears to be a step up on paper only to be a blowout inside the cage. Maybe this is going to be the bout where the Pankration champion goes to a decision for the first time, but I think he has a very good chance of finishing Corrales. Though “OK” hasn’t been knocked out yet, Pico has all the power to put him away. Obviously -500 is a high line, but when the props are released for this fight, keep your eye on the Pico inside the distance odds.

According to the odds, the closest fight on the main card is a bantamweight tilt between top prospects Juan Archuleta and Ricky Bandejas. This should be a great fight, but I like Archuleta in this one. First off, the guy is on a 16-fight win streak, and he’s 3-0 inside Bellator. His quality of opposition has been decent, with a notable win over UFC veteran Robbie Peralta. He trains at a great camp with fighters like T.J. Dillashaw and Cub Swanson, which should help him improve both his skill set and confidence. Most of his previous bouts came at featherweight, but I think as long as he makes weight safely he should be even better as a bantamweight. Archuleta is an incredibly well-rounded fighter and could soon fight Darrion Caldwell for the belt.

Getting by Bandejas won’t be easy, though. The Catone MMA fighter knocked out highly-touted prospect James Gallagher in his promotional debut and is riding a six-fight win streak. He also holds a notable win over current UFC fighter Merab Dvalishvili from earlier in his career. I think Bandejas is really good, but I think Archuleta is even better. At -270, the odds on Archuleta getting his hand raised look about right.

Though most expect Hager to roll over J.W. Kiser in his MMA and Bellator debut, I’m not so sure about that. Yes, there’s some hype behind Hager because of his wrestling background (both amateur and professional), but he has zero experience in the sport. That factor may come into play here against Kiser, who has minimal pro experience as well but has ample amateur fight experience. We just saw a similar situation last week in the UFC, when Greg Hardy was a massive favorite to beat Allen Crowder yet lost the fight due to disqualification. It’s also heavyweight MMA and anything can happen when two big boys wearing little gloves enter the cage. Due to all that, there’s no way I would bet -400 on the inexperienced Hager, and instead, I am tempted to take a small flier on Kiser at +300. Normally this wouldn’t be a fight I would label a Prime Pick, but there are only odds available for four bouts at this event, so I included it in this article. If you’re looking for a big underdog to come through this weekend, consider taking a small punt on Kiser.

Note: At the time of this article’s posting, only Bovada was offering odds on the Hager vs. Kiser bout, while most other sportsbooks were offering odds on the other three fights. Adam Martin is a mixed martial arts journalist who has been covering the sport since 2011. He is currently the lead odds analyst for Sherdog.com as well as the lead staff writer for MMAOddsbreaker.com. Adam is also the co-host of “The Parting Shot Podcast” on iTunes. His favorite fight of all time is Dan Henderson vs. Shogun Rua and he wishes Pride never died. Adam is based out of Toronto, Ontario, Canada, and he is a graduate of the University of Toronto and Centennial College. Get in touch with him on Twitter @MMAdamMartin.
« Previous Fight Odds Beating the Books: UFC Fight Night 143 Next Fight Odds Parlaying and Praying: Bellator 214 ‘Fedor vs. Bader’ »