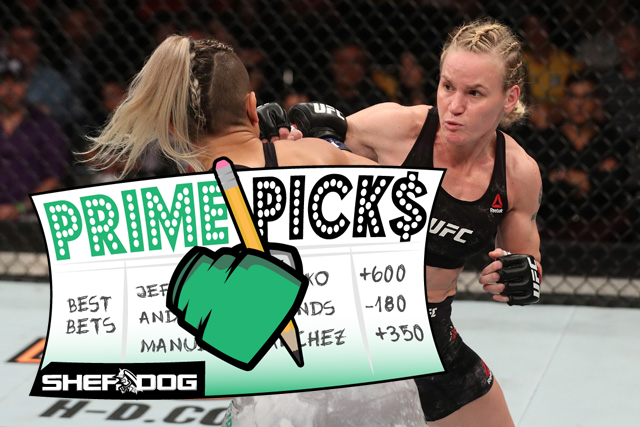 A really deep UFC 228 card takes place this Saturday at the American Airlines Center in Dallas, and the presence of 14 fights means plenty of betting opportunities. Below are my top plays for UFC 228 “Woodley vs. Till” in this installment of Prime Picks:


My favorite underdog play on the entire card is Price. I cannot believe he’s an underdog against Abdul Razak Alhassan, but there he is sitting out there with a plus symbol beside his name. I think there’s tremendous value here on Price. He’s 4-1 in the UFC and coming off of a devastating knockout against Randy Brown, as he stopped the former Ring of Combat champion with hammerfists off his back. If that win doesn’t get you excited about Price, I don’t know what would. He has some quality wins in the UFC and his loss came to Vicente Luque, who is a really good fighter himself. What I like about Price is that he can finish the fight on the feet and on the ground. He has quietly become one of the most well-rounded, underrated welterweights on the roster, and I believe he has the potential to be a contender.

Across from him at UFC 218 is Alhassan, who has also looked good in the UFC, going 3-1 with three knockouts. However, his level of competition has been really low, with his wins coming against Sabah Homasi (twice) and Charlie Ward, both of whom are no longer in the UFC. His decision loss to Omari Akhmedov also doesn’t sit well with me, as his gas tank didn’t hold up in that fight. Not to mention Alhassan is the older fighter in this bout at 33. Alhassan has legitimate knockout power, but Price is the more complete mixed martial artist, and I think you have to go with “The Hybrid” as an underdog to get the win.


I know White looked really bad in his UFC debut against Neil Magny, getting knocked out in the first round in May. You have to keep in mind that White took that fight on extremely short notice and cut a tremendous amount of weight to make it happen -- and against a consensus Top 15 opponent, no less. I don’t think there’s any shame in losing against Magny in that spot. Before that, White had won four straight fights by stoppage in the Cage Warriors Fighting Championship organization to earn a contract with the UFC, and at 28, I don’t believe one bad loss is going to completely set him back. While White had a terrible performance against Magny, it was a bad matchup for him.

This time, White gets a favorable matchup against an aging Diego Sanchez, who at age 36 is on the last legs of his long and storied UFC run. Sanchez is potential hall of famer, but I do not believe he has anything left in the tank. He’s coming off of back-to-back knockout losses to Matt Brown and Al Iaquinta, and two fights before that, he was knocked out by Joe Lauzon. All the wars and all the damage over the years have caught up to Sanchez, and his lack of durability makes him a prime target for a knockout loss these days. The fact that he’s bouncing between weight classes doesn’t sit well with me, either, as he’s fought at 170, 155 and 145 pounds the last few years before settling at welterweight. White is the bigger, younger and more dangerous fighter, and I believe “The Thundercat” will finish Sanchez.

Valentina Shevchenko Inside the Distance (-170)


The co-main event of UFC 228 is a mismatch of epic proportions, at least when it comes to the odds. Shevchenko currently stands as a -1300 betting favorite to defeat flyweight champion Nicco Montano, and that’s significant: If the line holds, Shevchenko would be far and away the biggest betting favorite as a title challenger in UFC history. There’s certainly good reason for her to be a big favorite. After all, Shevchenko fought tooth and nail with UFC women’s bantamweight champion Amanda Nunes a year ago, just barely losing out on the title at 135 pounds. She was a bit undersized at bantamweight, but since she dropped to flyweight she looks like she has found her home. In her debut at 125 pounds, Shevchenko showed off a complete mixed martial arts game, as she absolutely obliterated Priscila Cachoeira in one of the biggest beatdowns of 2018. Cachoeira will never be the same fighter after her encounter with “Bullet,” and that performance alone is why bettors have so much respect for Shevchenko.

To become the champ, she will first have to get through Montano, who is a rare champion underdog. Montano did look good on “The Ultimate Fighter,” as she defeated Lauren Murphy, Montana De La Rosa, Barb Honchak and Roxanne Modafferi to win the show and the inaugural flyweight title, but all of those fights went to a decision. Her lack of finishing ability concerns me as she steps up in competition. Moreover, she has had a sizeable injury layoff since winning the belt in December. Just like everyone else, I don’t see any way Shevchenko loses this fight. However, at -1300 odds, there’s no value on her at the moneyline. Instead, the value lies in Shevchenko winning inside the distance, which is -170. That’s a significant difference in odds in a fight where Shevchenko should be able to find a finish. Twenty-five minutes is a long time to work, and more times than not, I believe she finishes Montano in this bout. At these hugely discounted odds, I think Shevchenko inside the distance is the way to go here.


I also like Neal to beat Frank Camacho in what should be a fun welterweight bout. Neal is currently on a three-fight winning streak and has won seven of his last eight bouts, including a submission win over Brian Camozzi in his UFC debut. He’s another graduate of Dana White’s Tuesday Night Contender Series and looks like a solid prospect. Meanwhile, Camacho is just 1-2 in the UFC and coming off of a decision loss to Drew Dober. He’s an exciting fighter because he stands in the pocket and trades, but he takes way too much damage for my liking and basically relies on his chin to hang in fights. I don’t see Camacho hanging around the UFC much longer, and I think this is a good fade opportunity here. I believe this is a favorable matchup for Neal to continue his winning streak, and I think he should win a dominant decision or get a finish here.

Adam Martin is a mixed martial arts journalist who has been covering the sport since 2011. He is currently the lead odds analyst for Sherdog.com as well as the lead staff writer for MMAOddsbreaker.com. Adam is also the co-host of “The Parting Shot Podcast” on iTunes. His favorite fight of all time is Dan Henderson vs. Shogun Rua and he wishes Pride never died. Adam is based out of Toronto, Ontario, Canada, and he is a graduate of the University of Toronto and Centennial College. Get in touch with him on Twitter @MMAdamMartin.
Next Fight Odds Parlaying and Praying: UFC 228 ‘Woodley vs. Till’ »