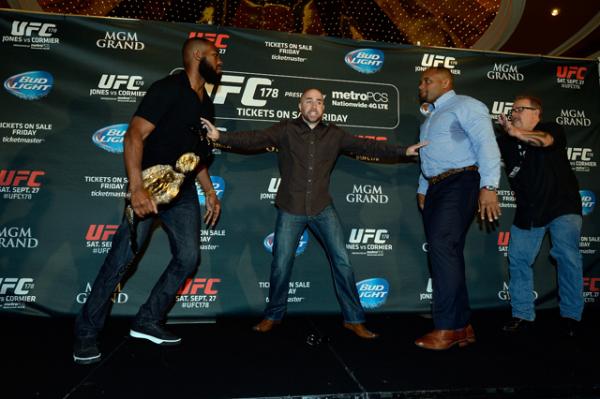 Can Daniel Cormier succeed where others have failed? | Photo: Jeff Bottari/Zuffa LLC UFC/Getty


The Ultimate Fighting Championship will ring in the New Year with one of the most anticipated fights in recent memory, as Jon Jones puts his light heavyweight crown on the line against Daniel Cormier in the UFC 182 main event on Saturday at the MGM Grand Garden Arena in Las Vegas.

Jones will enter the cage on the strength of an 11-fight winning streak, including seven straight successful title defenses. The 27-year-old Jackson-Wink MMA representative last fought at UFC 172 in April, when he took a unanimous decision from Glover Teixeira. Cormier, meanwhile, remains undefeated through 15 professional appearances. He last competed at UFC 173 in May, when he rendered former two-division Pride Fighting Championships titleholder Dan Henderson unconscious with a third-round rear-naked choke.

Sherdog.com touched base with a number of professional fighters and trainers to gauge their opinions on the UFC 182 headliner:


Zach Makovsky: This is the fight I am most excited for. I think Cormier will really test jones and I'm pulling for him. I think Cormier comes out strong giving jones some trouble early but I really think Jon has too many weapons and will slowly take over the fight winning a close unanimous decision.

Nam Phan: Cormier -- however he wants to win.

Michael Guymon: You will see Jones on his back, and you will also see him lose his title: “DC” all day.

Gabe Ruediger: The Jones-Cormier fight is a very interesting matchup, and it’s very hard to decide a winner. I’m going with Cormier. Jones hasn’t fought someone with the wrestling acumen of Cormier, and I think that will be the deciding factor.

Mike Ciesnolevicz: After seeing Alexander Gustafsson outstrike and take Jones down, I’m fairly certain Cormier will be able to score some takedowns also. I see Cormier having some trouble with Jones on the outside due to the reach, particularly in kicking range. I believe Cormier is the better boxer and the better wrestler in this fight and should be able to play big brother to Jon. Jones will be tough to finish, but I see Daniel winning by unanimous decision. The only way I can see Jon winning this fight is if the judges mess up the scorecards again, like they did when Gustafsson beat him.

Benji Radach: Oh boy, this is a tough one. This is a damn flip of a coin, really. Both are talented in all aspects. It’s really about who can implement their style better. I know Daniel is going to be hungry, but I’m going to give the edge to the champ. “Bones” wins.

Alan Jouban: Jones-Cormier is about as big as it gets for must-see fights. No one who is a fight fan will want to miss this one. I feel either one of these guys could take it on any given night. With that said, it will be Cormier’s night and a new champion will be crowned. I think it will go all five rounds, but “DC’s” pressure and takedowns will earn him the nod, and don’t be surprised if the loser earns an immediate rematch because of the hype.

Joe Duarte: I’m going with “DC.” I hope he can pull this off.

Brock Jardine: I think and I hope that “DC” finally puts an end to Jones. I think “DC” can outwrestle him and win a decision, or he could possibly win by KO.

Josh Sampo: Jones will need to defend the takedown and keep “DC” at the end of his punches. “DC” is going to make it a nasty war, but if Jones can minimize the takedowns, I feel he can squeeze out a decision. Jones wins by decision.

Chris Clements: I’m picking Jones in this one. He is better at everything, other than wrestling, and his length will make it hard for Cormier to close the distance enough for the takedown. Jones has really good wrestling, so the takedown isn’t going to be easy. 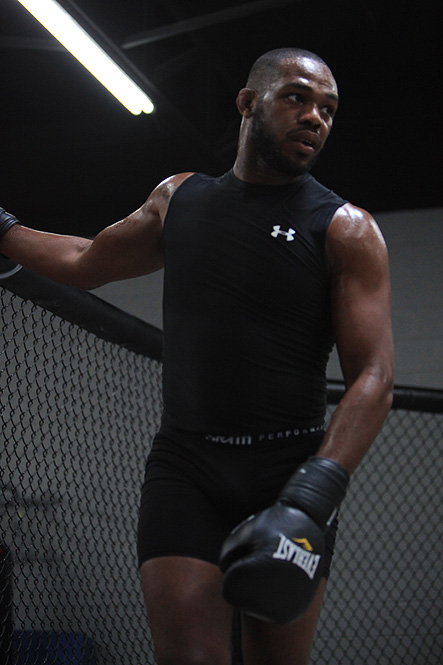 Photo: Dave Mandel/Sherdog.com
Jones is MMA royalty.
Cody Gibson: Anytime you get two guys who genuinely don’t like each other, it is exciting for most of us. I think it just sort of rationalizes fighting on a level most of us can understand. This is certainly the case with Jones and Cormier. I suspect Cormier has a difficult time getting close enough to land punches or secure takedowns. Jones is just too good at keeping opponents at the end of his punches. I’ve got Jones taking this one by fourth- or fifth-round stoppage.

Danillo Villefort: I believe “DC” will TKO Jones. I might be wrong, but I’m guessing Jones won’t be able to keep up with the pressure and take those heavy bombs and ground-and-pound.

Vitor Vianna: I think “DC” has small chance against Jones. Jones is more complete, with better strikes with his knees and elbows, and he’s going keep it standing. “DC” has never fought five rounds in the UFC. I pick Jones by unanimous decision.

Steven Siler: I want “DC” to win just so I can see another champ in the division, and I figure he has the best shot. “DC” wins by decision.

Roger Narvaez: I’ve got to go with “Bones” He’s a true legend in the making. There’s no wrestling advantage for either guy, but Jones’ reach will be too much for “DC.”

Al Iaquinta: I’m going with Cormier in this one. I think he will be able to get on the inside and mix up his boxing and wrestling.

Mitch Clarke: I’m picking Cormier by decision. I’m not 100-percent confident in the pick, but I want him to win.

Igor Araujo: This is a hard fight for both men. In my opinion, Jones is facing his best challenger, but even knowing that Cormier is really good, I have Jones winning by decision.

J.J. Ambrose: I can’t wait to see this fight. It’s hard to give one the edge over the other, as both men possess good standup and ridiculous wrestling. They both have done a great job of promoting this fight. I’m taking “DC” just because I’ve seen how well he does sparring with the heavyweight champion Cain Velasquez. “DC” wins by decision or TKO.

Jeff Hougland: I hope Cormier puts the boots to Jones, but that reach advantage Jones has got to be tough to deal with. Cormier wins by decision.

Ray Elbe: This is going to be a great fight. Jones is the bigger, younger, stronger, faster athlete, but everyone loses. American Kickboxing Academy is such a tough team, and Cormier will be well-prepared. I have Cormier winning with superior wrestling, bringing the belt back to San Jose in impressive fashion and earning people who bet on the underdog a nice bonus. Robert Drysdale: Cormier wins a decision with takedowns and control.

Travis Wiuff: Cormier wins by fifth-round ref stoppage after dominating for four rounds with his wrestling and clinch game.

Erik Paulson: Wow, I cannot wait for this fight. The anticipation from the fans and for both of these guys’ words makes this a possible “Fight of the Year.” When I cornered Josh Barnett against Cormier, I saw how that fight went and how well Cormier controlled Josh. That leads me to believe that Jones will be no different. Cormier’s pressure with his striking and takedown to top control will play out in his favor. We will see Cormier the victor and Jones a changed man.

Eric Prindle: Cormier is going to win by decision by pushing the pace, top position, damage and chaining his moves back to back to back.

John Gunderson: Man, this is a great fight. Cormier is such a powerful, world-class wrestler, while Jones is a once-in-a-decade MMA athlete. Cormier could have success early if he gets after Jon and works the inside, but I see Jones picking him apart for five rounds for a decision.

Vinny Magalhaes: People talk so much about height and reach in this fight, giving a huge advantage to Jones over Cormier. I think that’s an advantage when a guy is capable of keeping a fight standing the whole time when he’s going against another guy who can’t get him down at will, which is not the case in this fight. Jon is still looking to knock someone out clearly with a single punch, so I believe that even if he tags Cormier, “DC” will find his way into the clinch and take Jones down. I think that’s what's going to lead to Cormier winning the fight, either by TKO or decision.

Colton Smith: This is a very intriguing fight. You have one of the most dominant champions the UFC has seen in Jones, and on the other side of the cage, we have the challenger, an Olympic wrestler-turned-MMA standout in Cormier. Cormier hasn’t shown many kinks in his armor during his undefeated run as an MMA fighter. However, in Jones, he is facing a fighter who has time and time again silenced the naysayers against the best in the world. The X-factor in this fight will be Jones’ ability to utilize his reach and unorthodox striking, as well as his ability to surprise Cormier with the ability to stop the takedowns en route to a five-round unanimous decision victory.

Kyle Kingsbury: “DC” is going to shock the world. Actually, a lot of fans won’t be shocked when he wins the belt.