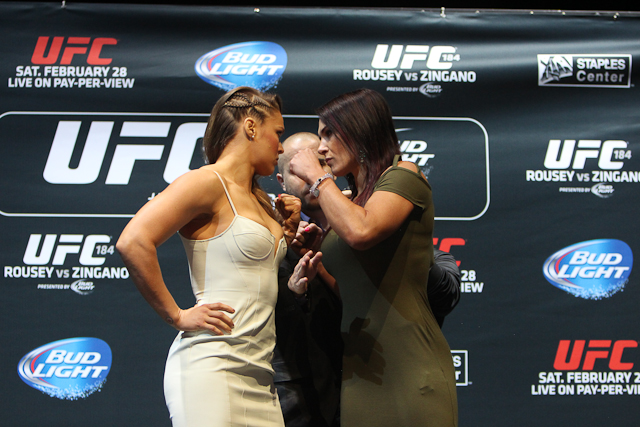 Ronda Rousey has been extended past one round just once in her career. | Photo: TJ De Santis/Sherdog.com

Zingano will take on unbeaten Ultimate Fighting Championship women’s bantamweight titleholder Ronda Rousey in the UFC 184 main event on Saturday at the Staples Center in Los Angeles, and she will do so as a heavy underdog.

The undefeated 32-year-old challenger has delivered eight of her nine professional victories by knockout, technical knockout or submission. Zingano last appeared at UFC 178 in September, when she returned from reconstructive knee surgery and the death of her husband to stop Amanda Nunes on third-round punches and elbows. A former two-division Ring of Fire champion, she owns wins over reigning Invicta Fighting Championships titlist Barb Honchak and onetime Strikeforce bantamweight queen Miesha Tate.

Rousey has steamrolled her opposition since arriving on the MMA scene in March 2011. The 2008 Olympic bronze medalist last competed at UFC 175 in July, when she scored a 16-second knockout on Alexis Davis at the Mandalay Bay Events Center in Las Vegas. Rousey has finished all 10 of her fights, nine of them inside one round and six of them in less than a minute. Her list of victims includes Tate (twice), Sarah Kaufman and Sara McMann.

Sherdog.com touched base with a number of professional fighters, trainers and MMA personalities to gauge their opinions on the UFC 184 headliner:

Mitch Clarke: Rousey wins by TKO, as she just starts way faster than Cat. I see a round-one TKO for Rousey.

J.J. Ambrose: I like Cat. She has so much heart and good standup -- she's a warrior -- but Ronda is a dragon that no one is slaying anytime soon. I’m going with Ronda via TKO in the first or second round.

Jeff Hougland: I like Zingano, but Rousey seems to be on a different level than the other women in the division. Rousey wins by arm lock from the mount in the second round.

Igor Araujo: Until “Cyborg” gets to the UFC, Ronda wins. 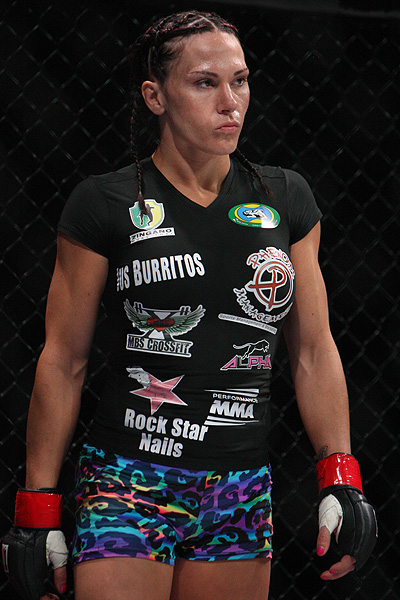 Photo: Dave Mandel/Sherdog.com
Zingano’s wait is over.
Zack Makovsky: Cat has been looking great and has shown grit and determination to come back from some unfavorable situations and come on strong later in the fight. Ronda is on a different level technically, though, and will put Cat away early via first-round armbar.

Ray Elbe: Zingano will be the new champion. I don’t know how she is going to win, but God wants this girl to win this fight.

Michael Guymon: If Zingano can stay out of the clinch, I believe she can win this fight. That being said, Rousey will get to the clinch and win.

Joe Duarte: I’m pretty sure Rousey will take this, but I’m going with Zingano on this one. I hope she can pull it off.

Keith Berry: I’m going to take Rousey by armbar in the second round.

Mike Ciesnolevicz: Zingano gets the upset by TKO. I think she will do the same thing to Rousey that she did to Miesha Tate: TKO by knees, and we have a new champ.

Roger Narvaez: I love this matchup, with two of the toughest women on the planet throwing down. Although Zingano is one tough cookie, I have to go with Rousey. Rousey’s striking has been consistently evolving, and I believe in this fight she will continue to showcase that skillset. It’s going to be good for the first couple rounds, but in the end, I have Rousey using her striking to set up that ever-so-famous armbar from hell. Rousey wins in round three via armbar.

Robert Drysdale: Ronda wins by armbar in the second round.

Cody Gibson: Ronda will smash her. Cat was getting beat up in her last fight before Andrade gassed. Rousey might face a little adversity, but she will finish her by round three.