Anderson Silva and Yushin Okami will do battle a second time. | Photo: Sherdog.com


For the first time in more than a decade, the Ultimate Fighting Championship returns to Brazil with UFC 134 on Saturday at the HSBC Arena in Rio de Janeiro, Brazil.

A five-round middleweight title bout between longstanding champion Anderson Silva and Yushin Okami, the last man to defeat him, will headline the pay-per-view event. Since being disqualified for an illegal upkick on Okami in January 2006, Silva has rattled off 14 straight wins, 13 of them inside the Octagon. Many now consider him the greatest fighter of all-time.

Sherdog.com recently touched base with a number of professional trainers and fighters to gauge their opinions on the UFC 134 “Silva vs. Okami” main event:

Jose Aldo: Anderson will win by KO or submission.

Marvin Eastman: Unanimous decision [for] Silva. Okami won’t trade with “The Spider.” He will run from him. If he trades shots, he’ll get knocked out.

Lyoto Machida: Anderson has shown so many times why he is the champion. He’s been the top fighter for a long time. Technically you can't compare the two. Okami’s only chance will be a surprise punch or if Anderson underestimates him, which I don't believe will happen. Anderson will win this.

Travis Wiuff: Anderson wins this fight easily in the second round by strikes.

Dan Hardy: I have Silva by TKO in the second. He will win by jumping spinning split kick and credit [Jean Claude] Van Damme, his new coach, for the win.

Erik Paulson: Anderson is at the top of his game right now and nobody has beaten him [in the UFC] yet. I think he will continue to win until he retires, unless he fights [Jon] “Bones” Jones. Then, it’s a tossup. We’re having an Italian dinner [before] the fights. If Okami beats Anderson, I will probably shoot my spaghetti dinner noodle out my nose.

Yves Edwards: I have Okami winning a unanimous decision. He has the same skill set as Chael [Sonnen], and I don’t think he’ll get tired enough to not get to half guard.

Javier Vazquez: Anderson should win this fight handily. It would be nice to see someone challenge Anderson, and my vote is for Sonnen. I think this fight was made as a placeholder till Sonnen can fight again. The only problem I see is if Sonnen can’t get past Brian Stann. I think Anderson beats Okami easily by KO or TKO in the second round.

Antonio Rogerio Nogueira: Anderson will impose his rhythm and will confirm why he is the favorite. He takes it. 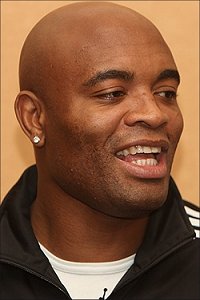 Anderson Silva File Photo
The pros are confident in Silva.

Thiago Tavares: Okami won’t find the distance to take Anderson down and will be easy prey on the feet. Anderson by KO.

Jorge Lopez: I think Silva will win via TKO in the third. This can be a very dangerous fight for Anderson considering Okami’s height and speed. Anderson rarely fights guys that are as tall and fast as him. Okami needs to take Anderson down and control [him], like the first time they fought.

Mike Whitehead: Silva by KO, round one.

Cristiano Marcello: I believe Okami will try to exchange punches early in the fight, as he knows Anderson isn't easily taken down. Meanwhile, Anderson will dominate the fight and win.

Nick Thompson: This fight reminds me of something that happened to Derrick Noble and me. I was incarcerated at the time. Derrick was working for the FBI and was tasked with interviewing me. His boss believed that my insights might be helpful in the pursuit of serial killer nicknamed “The Destroyer.” Apparently The Destroyer, who was later identified as Sean Loeffler, was skinning people and wearing their skins around with the wiener tucked under, kind of like a woman. I offered to profile The Destroyer if I could be transferred to a different prison. Instead, I began a game of quid pro quo, offering Noble clues and insights about The Destroyer in exchange for information regarding his past. After first making Derrick relive his traumatic childhood, Derrick used my insights to find and kill Loeffler. Meanwhile, I used the transfer as a means to escape. Last time Derrick and I talked, I phoned him from an airport in Bimini and told him I would not pursue him and asked that he do the same for me. I then had an old friend for dinner. Anderson by KO in one.

Keith Berry: I don’t see anyone touching Silva at 185 pounds; the only fight I’d like to see is a rematch with Sonnen, so I’m saying Silva via second round TKO.

Josuel Distak: I don’t see any other possibility except for an Anderson Silva win.

Tom Gavrilos: Okami is strong and well-rounded, but he will be overwhelmed by Silva’s striking; Anderson by TKO.

Scott Epstein: It really depends on what kind of shooting glasses Steven Seagal used while training Anderson for the fight. More importantly, is Steven related to Katie Sagal, who played Ed O’Neill’s wife on [the] “Married ... With Children” [television series]? Ed is a black belt in Brazilian jiu-jitsu, and this would help Anderson’s odds greatly. Silva in the second by Kogeki; that means something in Aikido lingo.

Rafael Cordeiro: Anderson will put on a great show and will finish Okami before it goes to the scorecards.

Jason Dent: Silva by TKO round two. I will be really surprised if anyone picks against him. Hope it’s a fun exciting fight for the fans.

Ricardo Liborio: I’ll go with The Spider via TKO.

Ray Elbe: Muay Thai technique is going to be too much for Okami, and Silva is going to utilize an impressive Thai clinch game.

Mike Ciesnolevicz: I think Okami is just one of those guys that make every fight boring. He is a big, strong, athletic guy but never really goes for the kill. He is content to grind out decisions. I think Anderson is going to counter Yushin and play it safe and use a lot of movement, fakes, etc. [Silva] might slow this fight down like he has in past fights, such as Demian Maia, Patrick Cote and Thales Leites. The only reason I’m excited about this fight is Anderson might land a big strike and KO Yushin at some point. I’m not very interested in this fight at all, but I say Anderson pulls it out in a decision.

Ron Foster: Anderson will be very light on his feet, using various angles and striking to keep Okami off balance. Okami will have no answers for The Spider; Anderson [via] KO in round one.

Gleidson Venga contributed to this report. You can also contact Mike Sloan at www.facebook.com/mikesloan19