Whether one takes it seriously or not, the MMA world is talking about Saturday’s EliteXC offering between newcomer Kevin “Kimbo Slice” Ferguson (3-0) and UFC Hall of Famer Ken Shamrock (26-13-2) on CBS.

Sherdog.com queried fighters, trainers and coaches to see who they thought would prevail in this battle between the Internet-bred sensation and the waning legend.


Kevin “The Fire” Burns: Shamrock will take him down and get a leglock -- probably a heelhook or kneebar. Kimbo’s cardio is also questionable while Shamrock always comes in shape. Experience wins the fight in my opinion. Kimbo does have a puncher’s chance with the punching power he brings to the fight.

Duke Roufus: (If) Kimbo keeps it standing he will prevail. Kimbo is on the way up; Ken is in a rough spot of his career. Do or die for Ken.

Eddy Millis: Tough one. I have trained with both. They are two good guys. I think Ken knows what he has to do to get back to his old school [style]. I’m going with Ken by footlock in round one.

Brodie Farber: I would love to see Shamrock win but I don’t see Ken holding up to Kimbo’s power. First round KO or TKO for Kimbo Slice.

Guy Mezger: Obviously Ken is my friend and I’m going with him. I think he has seen Kimbo’s devastating power and he’s older. He can’t take the shots to his head as much anymore. I think he’ll go back to his roots. He’s a wrestler and if his body has healed up the way he says it has, then he’ll be able to wrestle him. Kimbo’s weakness is wrestling. I’m sure he’s made some adjustments to it. He’s only been doing it for a few months and it’s hard to make those sorts of adjustments in a few months compared to somebody who has done it for years and years and years. My prediction is that Ken will be smart enough to wrestle him, take him down, ground-and-pound him and maybe submit him. If he stands up with Kimbo I think Ken’s in trouble, but Ken will be smart because Kimbo is a ferocious fighter and a good athlete. But Kimbo’s a tad inexperienced and Ken will use his experience and win. I’m really gunning for Ken in this one because I really want to see him win. 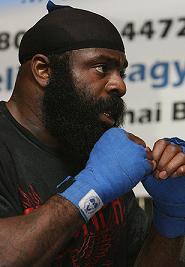 Dave Mandel/Sherdog.com
Kimbo Slice is the pros' pick
by a wide margin.
Kit Cope: It is well within Ken’s ability to beat Kimbo. However, we’ve seen Ken’s abilities ignored in his last few fights, as well as Ken turning off the lights from a phantom punch. I say Kimbo wins by desire alone in this -- round one -- and again beats an opponent (better) than himself.

Jorge Santiago: Kimbo in round two.

Zac George: Kimbo (via) first round TKO followed by an AARP lawsuit.

Nate Marquardt : I would say they are evenly matched skill-wise. I believe Kimbo may have more desire to win at this point. Kimbo in round one or two.

Charlie Valencia: I think it is a joke. Shamrock is getting a payday and Kimbo is getting an easy win.

Mike Dolce: As much as I’d like to see Ken go out on top, I just don’t see how he can overcome Kimbo’s size and strength advantages at this point in his legendary career. Sure, Ken is still a dangerous veteran but Kimbo is too young and too aggressive, which I think will lead to a first round TKO. Now, if Ken can avoid Kimbo’s power early on and get the fight to the ground late in the second or third, then we might just see lightning strike. But if I were putting money down, I’m picking Kimbo.

Rich Clementi: Kimbo by Shamrock giving up early. I think it would be a great UFC prelim fight.

Cole Miller: Kimbo by knockout, round one. Shamrock should retire after his last performance.

Cub Swanson: Kimbo because he has to win and Ken hasn’t won in a long time.

David Loiseau: Pretty simple -- Kimbo if he keeps it standing and Shamrock if he brings it to the ground. (My pick is) Kimbo.

Chael Sonnen: No reason to think Ken won’t throw this fight the same way he did the last one. Kimbo, round one.

Erik Paulson: Ken Shamrock needs to get the fight to the ground right away. He can’t mess around or play around and let him slug or take any punches. He’s gotta actually go after him right away and punch, shoot and try to take him down and try to finish him on the ground. There’s no reason to get into a slugging match with Kimbo because Kimbo hits hard. Kimbo’s strengths are his hands and his ability to scrap. I don’t think Ken can slug it out with him because he’s had shoulder surgery and the older you get the less you want to get punched in the face. As far as me, I’d say Ken as long as he punches, shoots and takes him down.