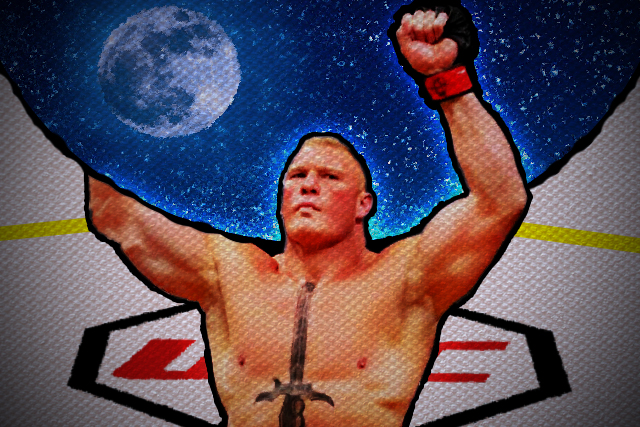 The last two weeks have been discouraging for me as a fan of mixed martial arts. They have been a seemingly endless parade of the worst things about the sport and in return have offered up relatively little of the things that make it great. I’m not normally one to run around proclaiming that the sky is falling, but many recent developments are especially disturbing because they reflect ongoing problems. Let’s recap a few high and low points.

I had looked forward to UFC 223 as a frontrunner for “Event of the Year,” the kind of card that reminds us why we fell in love with this sport in the first place. Instead, I watched it fall apart as Tony Ferguson’s freak knee injury put the most snake-bitten high-level matchup in MMA history on ice for the fourth time. Onetime mixed martial artist and current walking PSA for substance-fueled sociopathy Conor McGregor managed to thoroughly derail an event of which he wasn’t even an official part. The now-immortal “bus incident” dominated sports headlines, as the Skip Baylesses of the world weighed in with typically sensational and insubstantial hot takes, and MMA-focused media outlets such as this one were carpeted nearly wall-to-wall with McGregor news updates and opinion pieces.

In the aftermath of McGregor’s moment in the spotlight, just about everything else that could go wrong did. Another of the worst things about MMA, incompetent and peremptory regulation, cropped up. The New York State Athletic Commission managed to disqualify potential Ferguson replacements Max Holloway and Paul Felder for completely different yet equally incomprehensible reasons. In the end, the nine-fight lineup that limped across the finish line on April 7 was a mere ghost of what UFC 223 had once offered.

Meanwhile, Bellator MMA continued its Jekyll-and-Hyde existence. Bellator 196 and Bellator 197 both exemplify the best and worst of this very confused organization. The best of Bellator was on display: One thing Bellator does better than the Ultimate Fighting Championship is use sensible matchmaking to develop blue-chip prospects, such as Ed Ruth, A.J. McKee and Logan Storley, in an intelligent manner. The rest of Bellator was also on display, with increasingly desperate-looking efforts to stack the tops of those same cards with aging ex-UFC talent of any name value. Bellator has launched an eight-man tournament. Six of the eight entrants are UFC veterans, with a combined 106 Octagon appearances between them. At least five will be over the age of 40 by the time the tournament is finished.

Turning my attention elsewhere, UFC strawweight Paige VanZant’s memoir, “Rise: Surviving the Fight of My Life,” went on sale. It made news in large part due to the revelation that VanZant was gang-raped as a high school freshman. The response on social media was depressing, as anonymous hordes flocked to attack VanZant’s character, make light of her trauma or simply call her names. Regardless of anyone’s opinion of VanZant’s accomplishments or potential as a fighter, this was a low point. It reflects a culture that is hardly unique to mixed martial arts but is ugly and upsetting wherever it turns up.

In the midst of an already depressing week, we learned that Brock Lesnar’s freshly signed contract with World Wrestling Entertainment did not preclude him from competing in the UFC. Right on cue, UFC President Dana White teased the possibility of Lesnar fighting the winner of the Stipe Miocic-Daniel Cormier heavyweight title fight sometime this year. No. Please, no. That fight exemplifies the cancer that is currently devouring this sport from the inside. That it is even plausible enough that I’m writing about it is a symptom.

Whatever you may think of Frank and Lorenzo Fertitta and the Zuffa era of the UFC, it is undeniable that, to the extent they had the power to make it so, the best fighters generally fought the best fighters. There was a sense that the goal of matchmaking was to figure out who was the best fighter in each weight division, in essence a constant ongoing tournament. Freakshow matchups certainly occurred, but they were the exception rather than the rule and did not usually disrupt that meritocratic flow. Randy Couture-James Toney may have been a waste of time, but it didn’t throw any title pictures into disarray.

That feeling of merit-based matchmaking is a thing of the past. I pine for the days when the UFC’s worst matchmaking problem was that “The Ultimate Fighter” routinely put championship fights on hold for several months while the champion and challenger filmed a reality TV show. The promotion’s new masters, having acquired the promotion for an obscenely inflated price at the height of McGregor- and Ronda Rousey-fanned interest, are now obliged to look for the Next Big Thing, as it were. Or even the Last Big Thing, if it promises to sell pay-per-views.

When I see that Lesnar may make his way to the Octagon this year, I have to ask: Didn’t we just do this? In case you don’t remember, Lesnar was announced as a fairly late addition to UFC 200, late enough to need a special exemption from the UFC to allow him to compete without being in the United States Anti-Doping Agency drug testing pool for the requisite four months. To the surprise of nobody who had seen Lesnar in the WWE that year, he showed up on the weigh-in scale in rare physical form in July 2016. To the surprise of some, he thoroughly hammered Mark Hunt in a dominant decision victory. Whether it was surprising that the win was revised to a no-contest when Lesnar promptly failed two drug tests is a question I will leave to the reader.

To me, Lesnar’s drug issues weren’t -- and aren’t -- even the real problem. The true problem was that Lesnar’s return to the UFC in 2016 was explicitly a one-off affair from the very start. Win or lose, he was headed back to the world of sports entertainment; SummerSlam was mere weeks away. There is zero indication that a Lesnar title fight this year will be any different. That works out fine for the WWE, since professional wrestling loves when its top stars have the sheen of being legitimately tough guys. It doesn’t work as well for the UFC. The UFC’s currency is entertainment, but the treasure that backs that currency is credibility. Fights that don’t build that credibility or, worse yet, undermine that credibility -- as when a roided-up Lesnar mauls a Top 10 fighter, then whistles his way to the bank -- bankrupt the proposition at the core of MMA.

Note that I do not blame Lesnar for this in any way. He is a truly rare athlete and on some level I’m grateful to see him compete in mixed martial arts no matter how pointless the matchup. He is also a very savvy businessman who turns 41 this year and has a rapidly closing window of time in which to monetize his athletic gifts. Rationally, if he wants to fight MMA once every two years and use the threat of it to hold Vince McMahon over a barrel, I have to say: More power to him. What I’m really lamenting here is the desperate, short-sighted direction MMA’s top promotions exhibit, where the next big payday seems to overcome all other considerations. At best, if Lesnar challenges the UFC heavyweight champ, loses and walks away, it sets the division and all contenders back by several months. At worst, if he wins and walks away, the division is a joke, complicated even further if Lesnar fails another drug test after winning.

In Greek mythology, Atlas was one of the Titans, a race of divine beings who warred and lost against the gods of Olympus. As punishment, Zeus condemned Atlas to hold the sky on his shoulders. Ancient Greek lore is silent on whether Atlas was considered a wise choice for the job. However, as the Ultimate Fighting Championship has apparently decided that the sky is falling, I have serious doubts about the modern-day Atlas the organization appears to be bringing in as structural support. He’s going to walk away again and leave the sky to fall down around our ears.